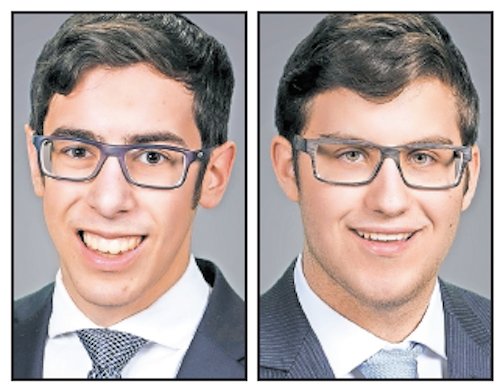 Valedictorian Noam Mayerfeld of Teaneck loved his four years at MTA, where he built relationships with rebbeim and faculty members, made new friends from different communities, and participated in various extracurricular activities.

He served as President of the Debate Club for two years, Captain of the Mock Trial Team, and President of the Hatzioni Israel Advocacy Club. He also helped organize the MTA Political Action Club’s lobbying trip to Washington, was a Yeshiva Fellowship Chaburah Coordinator, and spent time as a member of the Torah Bowl Team and the Polis publication.

Noam enjoyed serving as a Cub2Lion Senior mentor for Freshmen this year, creating bonds with the next generation of MTA students. He was also selected to participate in the Senior Fellows Program, where he had the opportunity to work one-on-one with Rabbi Jeremy Wieder, Yeshiva University’s Joseph and Gwendolyn Straus Professor of Talmud and Adjunct Professor of Bible.

Noam was named a Commended Student in the National Merit Scholarship Competition.

He looks forward to attending Yeshivat Kerem B’Yavneh next year, followed by the the Jay and Jeanie Schottenstein Honors Program at Yeshiva University.

Salutatorian Ephraim Crystal of Edison writes for the school newspaper, The Academy Newsand is a member of the National Honors Society. He was the first-place winner of the Bronka Weintraub High School Bekiut Program in his Sophomore year.

Ephraim is also the recipient of Yeshiva University’s Torah U’Madda Book Award and the College Board’s AP Scholar With Honor Award and has won several online computer programming contests and plans to major in Computer Science.

Ephraim will attend Yeshivat Kerem B'Yavneh next year, followed by the Jay and Jeanie Schottenstein Honors Program at Yeshiva University.