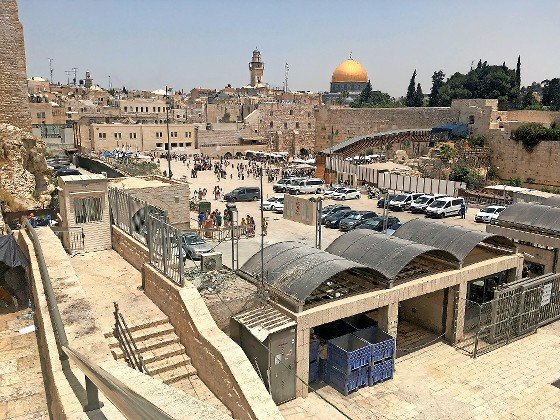 A view of the plaza in front of the Kotel, adjacent to the Temple Mount, including the ramp used by Jews to ascend there.
Ed Weintrob, The Jewish Star
Commentary by Dr. Alex Sternberg

Israeli Minister of National Security Itamar Ben-Gvir’s recent visit to the Temple Mount was uneventful, as it should have been. After all, Ben-Gvir was an Israeli minister visiting sovereign Israeli territory.

When Ben-Gvir announced his intention to visit the Mount, Hamas called it a “crime” and “brazen aggression.” The Palestinian Authority proclaimed it an “unprecedented provocation and a dangerous threat.” Saudi Arabia, the UAE and Jordan also denounced the visit. The US demanded, once again, that Israel maintain the “status quo” at Jerusalem’s holy sites.

The Temple Mount has been a unique flashpoint between Jews and Arabs for over a century. The cry of “Al-Aqsa is in danger” has long been a convenient libel used by unscrupulous Arab leaders to incite the masses to violence.

The father of the libel was the Grand Mufti of Jerusalem Haj Amin al-Husseini, a notorious antisemite and Nazi collaborator who began his nefarious activities in the early 1920s. An Islamist with a penchant for self-promotion, he realized that by exploiting the Al-Aqsa Mosque, the main symbol of Islam in British Mandate Palestine, he could further his political ambitions.

An early enemy of Zionism, Husseini regularly engaged in incitement against the Jews of Palestine. In 1920, this resulted in five deaths and 211 injured. In 1929, Husseini used the occasion of Tisha B’Av to tell an Arab crowd that the Jews were coming to destroy Al-Aqsa and rebuild the Temple in its place. “Al-Aqsa is in danger!” he shouted, pointing to throngs of Jews squeezing into the narrow alleyway at the Western Wall to commemorate the Temple’s destruction.

Angry mobs surged through Jewish communities, attacking peaceful Jews and raping, killing and looting. Hundreds were killed in Hebron, Safed and Jerusalem. Husseini was jailed by the British, released shortly after and then appointed Mufti of Jerusalem. This new title gave him a coveted position within the Arab community.

In the years that followed, Husseini was responsible for much of the anti-British and anti-Jewish agitation that culminated in the infamous 1936-39 Arab uprising. The British executed hundreds of Arab leaders in response, but also issued the notorious “White Paper” that restricted Jewish immigration to Palestine just as Nazism was beginning its slaughter of the European Jews. Now, those Jews had one less place to escape to.

The British eventually expelled the Mufti from Palestine, but he found a warm welcome in Berlin as a guest of Hitler. After World War II, he lost much of his influence and, with the creation of Israel, was barred from the Jewish land.

Husseini set up shop in Egypt, where he met a young Egyptian agitator named Yasser Arafat. Under the Mufti’s tutelage, Arafat morphed into a Palestinian. He also learned the usefulness of the “Al-Aqsa is in danger” battle cry.

Perhaps the most famous use of this age-old lie was during the “Al-Aqsa intifada” that began in 2000 and was blamed on then-leader of the opposition Ariel Sharon’s visit to the Temple Mount. Following the visit, the Palestinians launched a terrorist war that resulted in thousands of Israeli and Palestinian deaths.

Despite the claim that Sharon started the intifada, the truth was revealed years later and confirmed by Arafat’s wife and Fatah Central Committee member Nabil Shaath.

In July of 2000, Arafat returned from peace talks at Camp David with then-President Bill Clinton and Israeli Prime Minister Ehud Barak. Barak had offered Arafat 97 percent of Judea and Samaria, which Arafat refused.

One of the sticking points was sharing the Temple Mount with the Jews. While Clinton considered this reasonable, it was a condition Arafat was unwilling to accept. Clinton was furious and blamed Arafat for the breakdown of the talks.

While at Camp David, Arafat told Clinton that Jews have no connection to “Palestine” because they had never lived in the Land of Israel and there was never a Jewish Temple in Jerusalem. According to a report in Newsweek, an incredulous Clinton looked at Arafat and said, “I know there was a Temple there.”

Arafat’s lie has not died. In fact, it has become a new talking point, with Muslim “scholars” and “archeologists” maintaining that there was no Jewish Temple. Arab governments increasingly deny the Temple as well. Due to their lobbying, UNESCO recently voted to erase any Jewish connection to the Temple Mount and declared the Western Wall a Muslim heritage site.

The Palestinians know that their lie is endangered whenever Israel asserts Jewish rights on the Temple Mount. This is why they regularly fly into hysterics at the slightest hint of a Jewish presence at the site. They understand what the Talmud teaches: When one acquires property, one takes action to show ownership, such as putting up a fence or plowing a field.

The Arabs are doing everything they can to prevent Israel from showing any ownership over the Temple Mount. They do so because they know that if Israel demonstrates ownership, their attempt to erase the Jews from the Land of Israel will collapse.

Israelis have come to understand that this is part and parcel of the Palestinians’ ultimate ambition, which is to reconquer all the land “from the river to the sea” — all of Israel. Such attempts to destroy the Jews always begin with lies, and these lies must be confronted. Then-Defense Minister Moshe Dayan was wrong to surrender control of the Temple Mount to the Waqf in 1967.

That is why Jewish visits to the Temple Mount, including by Ben-Gvir, must continue.