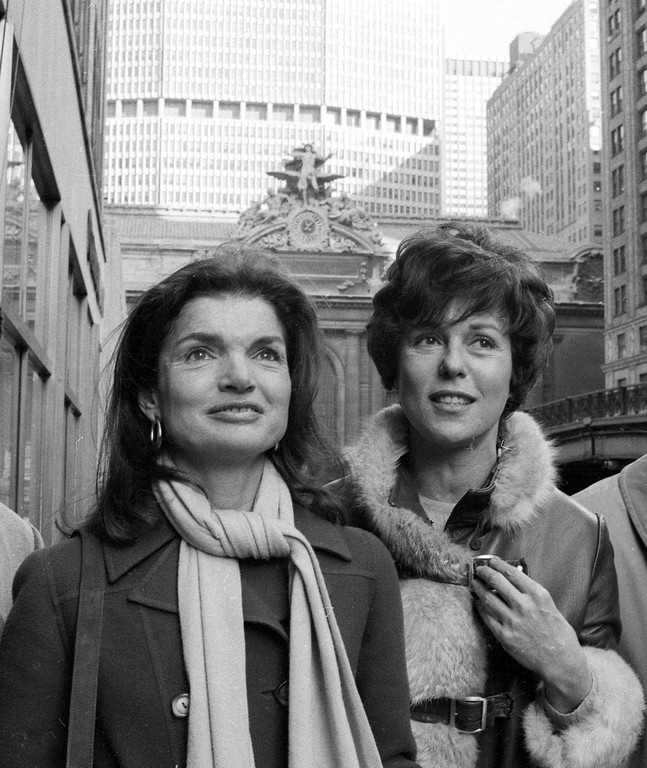 Bess Myerson (right) and Jacqueline Kennedy Onassis leave Grand Central in 1975 after holding a news conference as members of the Committee to Save Grand Central Station.
AP Photo by Harry Harris
By Christopher Weber, AP

Bess Myerson, the first Jewish Miss America and a New York political force until a series of scandals dubbed the “Bess Mess” forced her into obscurity, has died. She was 90.

Myerson died Dec. 14 at her home in Santa Monica, California, according to the Los Angeles coroner’s office and Department of Public Health Vital Records Office. Her death was first reported by The New York Times.

The Bronx-born Myerson was hailed as a Jewish, feminist Jackie Robinson — a groundbreaker for her religion and sex — after parlaying her stunning 1945 Miss America victory into national celebrity.

The 5-foot-10 dark-haired beauty, unlike her predecessors, accentuated her intelligence. Myerson landed a series of television jobs, from game show hostess to on-air reporter, before her appointment as New York City’s chief consumer watchdog in 1969.

The popular Myerson helped Ed Koch win the 1977 mayoral race, deflecting rumors of the bachelor candidate’s homosexuality — which he neither confirmed nor denied — with her constant presence at his side. “The immaculate deception,” cynics called it after the couple shared an election night victory kiss.

She made her own bid for office in 1980: an unsuccessful Democratic primary run for U.S. Senate. Three years later, Koch appointed her Cultural Affairs commissioner — an $83,000-a-year post as the city’s liaison to the arts.

“People like to read about me,” she said in a 1987 interview. “They like to imagine themselves in my life.”

But Myerson’s carefully cultivated image crumbled in the mid-1980s under a barrage of political and personal embarrassments that became known as the Bess Mess.

A city background check exposed Myerson as an insanely jealous woman who harassed an ex-boyfriend and his new lover. She repeatedly invoked her right against self-incrimination in a 1986 corruption probe of a subsequent boyfriend, Carl “Andy” Capasso, who was born the year Myerson was crowned.