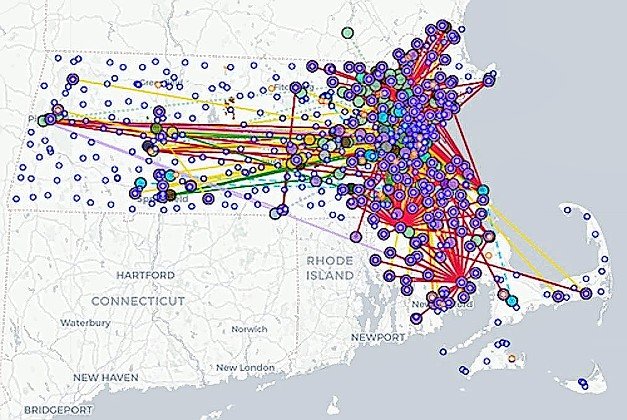 With its conspira-torial fantasies, Jew-hatred and paranoid politics, the Mapping Project is a call for dangerous, even violent action.”
By Richard L. Cravatts

As if further evidence of the fundamentally anti-Semitic nature of the Boycott, Divestment and Sanctions movement were needed, the recently produced “Mapping Project” of Jewish sites in Boston proved it conclusively. It made clear that anti-Israel activists inhabit an ideological universe replete with conspiracies, delusions and nihilistic hatred of both Israel and the Jewish community as a whole.

BDS Boston’s Facebook page, which promoted the map, enthusiastically cheered on this fantasy of oppression. The group made the wild claim that the map “illustrate[s] how local support for the colonization of Palestine is structurally tied to policing, evictions and privatization locally and to US imperialist projects worldwide.”

The map plots the actual physical locations and addresses of the institutions, universities, organizations and individuals who, the activists contend, contribute to structural racism, apartheid, colonization, land theft and overall oppression as part of a vast conspiracy. The map claims that this conspiracy is a plot by power elites to suppress freedom and deny the Palestinians their right to self-determination.

The idea of a manipulative, powerful and malign “Israel Lobby” has been part of the anti-Israel dialogue for some time, at least since a book with that title was published by scholars Stephen Walt and John Mearsheimer in 2008. That book focused on Israel’s alleged power to bend US lawmakers to its will, forcing the United States to behave in ways that harm its own interests and benefit Israel.

The “Mapping Project” goes beyond that: First by focusing more broadly on the supposed predations of Zionism. Second, and more odiously, by linking together a plethora of Jewish communal organizations and institutions into a furtive conspiracy to oppress others. And this conspiracy, the map’s creators contend, does not only oppress the long-suffering Palestinians, but also other groups by fostering racial injustice, anti-black policing and a long list of other offenses.

The map’s characterization of pro-Israel lobbying by Jewish institutions and organizations as “manipulation” is a particularly incendiary bit of language. It is a classic anti-Semitic canard, akin to The Protocols of the Elders of Zion, which purports to reveal a Jewish conspiracy to secretly rule the world.

Such language has a long history, and not only in relation to the Jews. In 1964, historian Richard Hofstadter defined it as “the paranoid style” in politics.

In A Culture of Conspiracy, Michael Barkun suggested, “Conspiracism is, first and foremost, an explanation of politics. It purports to locate and identify the true loci of power and thereby illuminate previously hidden decision-making. The conspirators, often referred to as a shadow government, operate a concealed political system behind the visible one, whose functionaries are either ciphers or puppets.”

To the creators of the “Mapping Project,” Zionists and Jews are the conspirators.

Such ideologies are delusional and dangerous because, as proved by the “Mapping Project” itself, they do not remain mere ideologies. Indeed, the map’s creators made their intentions quite clear. “Our goal in pursuing this collective mapping was to reveal the local entities and networks that enact devastation, so we can dismantle them,” they stated. “Every entity has an address; every network can be disrupted.” It is clear that the “Mapping Project” is, in fact, a call for dangerous, even violent action.

Moreover, the “Mapping Project” is not the first of its kind. Last year, David Miller, a former professor of political sociology at the School for Policy Studies at Britain’s Bristol University, gave a presentation that outraged Jewish students. One of the slides employed by Miller as a visual aid was a graphic that supposedly depicted the “Israel Lobby.” It listed allegedly nefarious “ultra-Zionist funders” like the Jewish National Fund, but also the Community Security Trust, a UK organization roughly analogous to the United States’ entirely benign Anti-Defamation League.

However, the slide that drew the most attention — and may have been the model for the “Mapping Project” — was an elaborate diagram depicting dozens of organizations supposedly controlled by the Israeli government. The plethora of pro-Israel individuals, organizations and agents included were allegedly involved in a nefarious and powerful “British Zionist scene” that Miller had exposed.

The view that pro-Israel lobbying is characterized by manipulation, dual loyalty and conspiratorial use of behind-the-scenes power and influence, achieved through greed and money, is precisely the language of classic anti-Semitism.

Paranoia and fantasies about Jewish power have been prevalent for millennia. The “Mapping Project” is only the latest permutation of this noxious hatred. “We are all sufferers from history,” Hofstadter observed, “but the paranoid is a double sufferer, since he is afflicted not only by the real world, with the rest of us, but by his fantasies as well.”