A Torah tribute to a true hero on Tisha B’Av 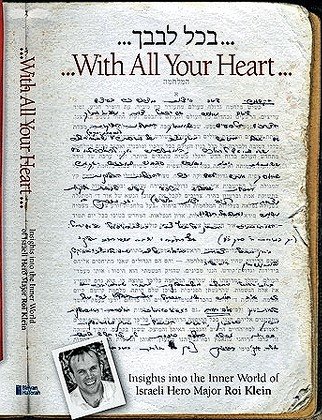 Grenade! Grenade! The very mention of this word can send shudders down the spine of even the most battle hardened. The instinct is to run. However, on the first of Av in 2006, one brave G-d-fearing soul, IDF Major Roi Klein, yelled these words in urgent warning and threw himself on the grenade, thus shielding the men under his command from certain death.

Roi Klein was a hero and his life’s story is heroism personified. The accolades expressed by a grateful people filled the papers and airwaves in Israel for months. However, there is one tribute that was published in Roi’s memory that is unique and deserves your attention.

Simply titled “With All Your Heart,” this volume, published by Binyan HaTorah and edited by Netanel Elyashiv, is based on the shiurim of Rabbi Eliezer Kashtiel, who was Roi’s chavrusa in his last years. Roi’s legacy centers on the lumdus of Rabbi Kashtiel’s lectures; based on the writings of Rav Kook’s Orot Hateshuva, the text elaborates upon the importance that one must give to the concept of adinut in an attempt to strive for spiritual perfection.

This book, which was first brought to my attention by Danny Taubenfeld of Cedarhurst. is not a simple biography of Roi. Rather, it is a tour of his spirit that informed his life’s work. According to Elyashiv, Roi was a combat officer who studied the Daf Yomi every day.

“In his death, the officer who redefined bravery and courage as he leaped on a live hand grenade to save the lives of others while sacrificing his own, who clearly and loudly said ‘Shma Yisrael’ with his last breath, symbolized the synthesis in his personality, Jewish and Israeli traits both in his noble life and in his heroic death,” wrote Rabbi Kashtiel.

This book gives the reader a look into Roi’s spiritual world, opening the portals to the spiritual milieu in which he lived, first in Ra’anana, then Eli, all the time under the influence of the Bnai Akiva movement and its hashkafah of Torah v’avodah.

Writer Chana Weisberg, in a beautiful essay written shortly after Roi’s death, expressed it this way: “Roi’s enemy was willing to die to bring death and mourning to as many as possible; Roi was willing to die to ensure life and liberty for others, to preserve a world in which Jews could pray to G-d in their synagogues, perform G-d’s commandments and make our world a better, more moral and more conscientious place.”

Rabbi Berel Wein, in his review of this book, put it this way: “There are heroes of the body and there are heroes of the spirit. This book is about a unique Jew who combined both types of heroism in his life and death. It is an inspirational and educational read that should be a part of every Jewish library.”

As we enter the fast of Tisha B’Av, may we each give Roi, whose yahrtzeit was observed this past Shabbos, a special place in our hearts, together with all the kedoshim whose sacrifice we recall this week.

A version of this column was published in 2008.