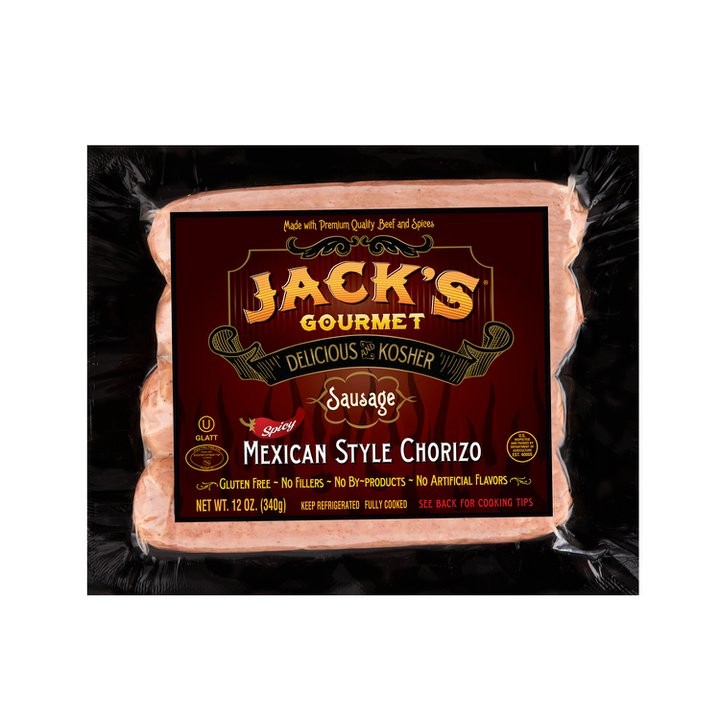 During the hustle and bustle of Kosherfest is it easy to get caught up in the crowd and miss something. The narrow aisles are always packed with press, distributors and food enthusiasts and so often times in order to deal with the crowd you move more quickly then you should and end up overlooking something that is truly spectacular.

It is unfortunate that this year because of that exact reason I missed my first opportunity to try Jack's Gourmet Sausages the best new kosher product on the market.

Lucky for me Jack's Gourmet's Operations Manage, Dr Alan Broner, is dedicated to making sure that people get the chance to try his product and so several months later at a tasting in Teaneck I would find out that the product Susie Fishbein called Kosherfest 2010 best in show was not just one of the best new products but probably one of the finest kosher products currently available. Jack's Gourmet is a company that specializes in providing high end deli meats and sausages. A relatively new company Jack's is dedicated to offering the kind of products that until now has been almost non existent in the kosher world.

Since they opened Dr. Broner has been traveling the Tri-State kosher grocery store circuit hosting tastings so that anyone interested has an opportunity to try Jack's various products. What I found most amazing about this is that many life long kosher eaters have never had the opportunity to try things like Chorizo or Borewors Sausages. These unique sausages are usually only available as a kohser product in the regions where they are culturally popular but thanks to Jack's Gourmet they can now be purchased at most kosher grocery stores. Currently there are five different sausages offered. They are Chorizo, Bratwurst, Boerwors, Hot Italian and Sweet Italian. Each of these sausages is amazing in their own way and contain nothing but meat and spices. No artificial ingredients or fillers. Soon Jack's Gourmet will be releasing a lamb Marguze and they are looking into creating a poultry based line.

Providing these items to the kosher market is quite honestly groundbreaking. Finnaly traditionally ethnic dishes requires these ingredients can be authentically reproduced. Nothing illustrates this better then the fact that The Prime Grill one of New York's most prominent kosher restaurants now offers a gumbo made with Jack's Gormet Chorizo.

Personally I used a combination of the Italian sausage and the Chorizo to make a knock your socks off Jambalaya last Shabbat. I think it is safe to say that Jack's Gourmet will have a prominent place in the homes of kosher consumers everywhere