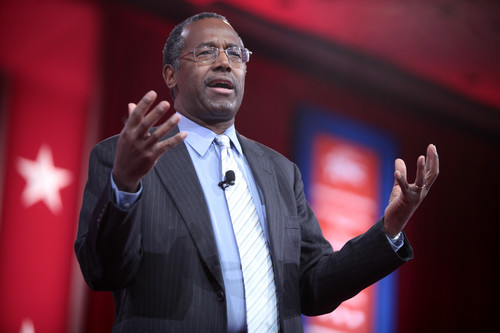 Ben Carson ignited a media firestorm with his recent comments on Jews, guns, and the Holocaust.
Gage Skidmore via Wikimedia Commons
Commentary by Abraham H. Miller

Predictably, the most vicious attack on Carson comes from the Jewish Daily Forward, where Carson is depicted as a dangerous crazy whose remarks are offensive beyond measure to Jews. The Forward goes so far as to reinterpret the Warsaw Ghetto uprising, one of the most courageous of the Jewish struggles against the Nazis, as an act of futility: “In the Warsaw Ghetto uprising, for example, armed Jews killed roughly two dozen Nazis. The Nazis, during the same uprising, killed 13,000 Jews.”

Seldom has an act of courage been so viciously corrupted as insignificant and meaningless. Worse, it is a false and incomplete characterization. The Warsaw Ghetto uprising had only about 750 active fighters. They were poorly armed. They held out for nearly a month against one of the world’s best-trained and best-equipped fighting forces. It is utterly irrelevant to argue that the Nazis killed 13,000 Jews during this period. They would have killed them anyway and at a faster rate.

The Forward cannot comprehend the triumph of the human spirit, the hope and dignity that come from resistance. Their policy appears to be, better go quietly to the gas chamber and not make trouble.

Even when resistance is futile, it is worthwhile. It is better to die fighting like a lion than go to the slaughter like a sheep. The Forward believes that, faced with overwhelming military superiority, it is better to surrender, even when surrender means death.

Carson is also right about gun confiscation. The Weimar Republic had gun regulations that were oppressive. When the Nazis took power, they used the Weimar gun lists to confiscate the guns of all those they saw as their enemies, starting with the Jews. And while they did make the acquisition of guns easier, this only applied to party members, not to all Germans as The Forward mistakenly claims.