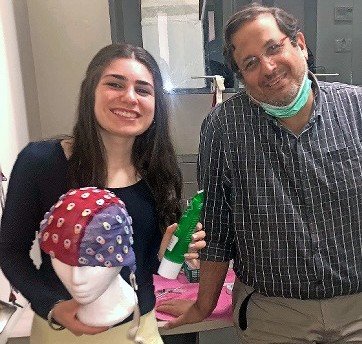 Alyssa Silvera and Dr. David Anaki with an EEG cap, which sits on the head. Using syringes or pipettes, electrode gel is squeezed into the small holes in the cap to connect each electrode to the scalp and transfer the neural impulse.
Julia Insler 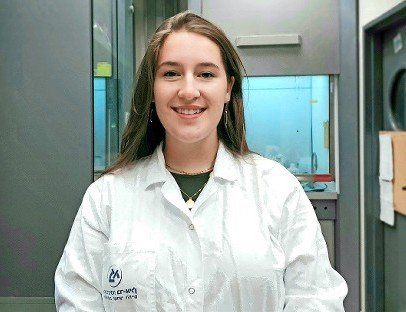 Chaya Bracha Gordon of Woodmere is participating in a summer science program at Bar-Ilan University. 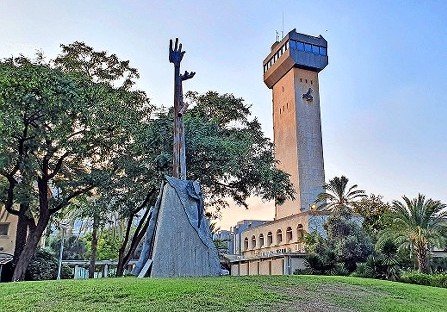 Sculpture on the Bar-Ilan campus in Ramat Gan near Tel Aviv.
Previous Next

A contingent of college students from the Five Towns is making an impact on scientific research in Israel this summer.

In fact, approximately one fourth of the 26 undergraduates from the United States and Argentina who are participating in the tenth annual Summer Science Research Internship Program hail from the South Shore communities.

Alyssa Silvera, of Woodmere, is working in Dr. David Anaki’s lab in the Department of Psychology, where she’s conducting a meta-analysis on social cognition of individuals diagnosed with Turner syndrome, a chromosomal disease in women born either missing, or partially missing, an X chromosome. The disease impacts fertility, appearance and different aspects of cognition since certain neuroreceptors in the brain don’t function normally, or at all.

The 21-year-old, who is entering her senior year at Yeshiva University’s Stern College for Women, has also been assisting a graduate student in her lab with an EEG study comparing social anxiety in individuals with autism to typically developing adults.

“Alyssa delved into the lab’s research with enthusiasm and lots of curiosity. I hope that her exposure to research will be long-lasting and impact her future career,” says Anaki. When she graduates, SIlvera looks forward to pursuing graduate studies into the relationship between health and psychiatric disorders.

In Prof. Avy Susswein’s lab at the Gonda (Goldschmied) Multidisciplinary Brain Research Center, Chaya Bracha Gordon, of Woodmere, is working to uncover what genes are expressed in higher or lower quantities when aplysia are learning, or not learning. We may not hear much about aplysia on a daily basis, but these marine creatures — also known as sea slugs — can actually teach us more about how the brain learns.

“We train them to learn something, specifically that a particular food is not edible, and then we can see the amount of gene expression in their brain compared to those who’ve received less training or no training at all. This enables us to determine which genes are responsible for learning,” says Gordon, who’s entering her senior year at Queen’s College.

“Many genes in simpler organisms have counterparts in mammals, so if we discover a strand of nuclear types in aplysia that is similar to that in larger mammals, we can learn more about brain function in mammals.”

The 22-year-old biology major hopes to return to Israel in the future to begin medical school.

The genes in our bodies are not isolated, but connected through multiple networks that constantly interact with one another. Sometimes one gene can turn off while another turns on, but much remains to be learned about the next step in their interaction. In order to discover more about this interaction, biologists turn to computer scientists to speed up the long, arduous process of experiments that would normally be done by hand.

In Prof. Hillel Kugler’s lab in the Kofkin Faculty of Engineering, 21-year-old Jonathan Haller, of Woodmere, is using and creating computational tools to analyze gene interaction networks. For Haller this work has been the perfect combination of biology and computer science.

As a son of two medical doctors, he’s always been interested in biology and, as a computer science major at Yeshiva University, he was able to put his acquired skills to good use by creating computer models that deliver much faster results to biologists. Haller plans to become a software engineer and make aliyah in the near future. He is well aware that his computer science skills and native English will make him a great asset to the Start Up Nation.

Prof. Arlene Wilson-Gordon, of Bar-Ilan’s Department of Chemistry, is directing this year’s program. Based on the students’ academic background and interests, she paired them with Bar-Ilan faculty members and research assignments that would best enhance their summer experience and promote individual growth and career development.

“This is a tremendous opportunity for the students to experience a state-of-the-art lab in Israel and to get to know students from all the diverse sectors of Israeli society,” she says.

The program also includes half-day trips to scientific, industrial, medical, archaeological, and other sites around the country, including IAI (Israel Aerospace Industries), the laboratories of the Agriculture Research Organization (Volcani Center), excavations at Tell es-Safi/Gath, Teperberg Winery, lectures by BIU scholars on a range of topics, as well as night activities, Torah learning, and Shabbatonim at YU’s Gruss Institute in Jerusalem, where the group is housed.

Since its inception in 2011, the program has benefited from the generosity of the late Dr. Mordecai D. Katz, chairman, and subsequently honorary chairman, of the Bar-Ilan Board of Trustees, who supported the YU student participants, and from the generosity of the J. Samuel Harwit z”l and Manya Harwit-Aviv Charitable Trust. The Barbara and Fred Kort Foundation is generously supporting this year’s program.

“This program does a really good job of giving exposure to what research is like in a real-life lab setting which prepares us for graduate school and our careers,” she says. “There is a huge emphasis on learning not just to become educated but to use our knowledge practically in order to better the world. I am very grateful to all the professors we’ve met who have taken us in and shown us the ropes.”

Here are 10 reasons to love the pomegranate