2 top graduates are selected at the HANC HS 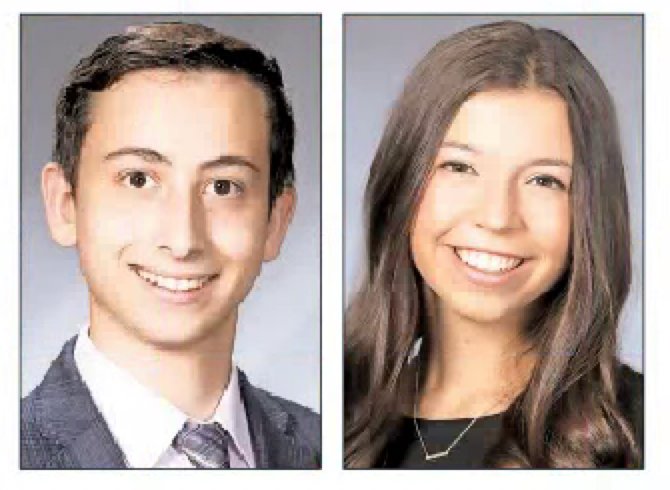 The Hebrew Academy of Nassau County menahel, Rabbi Shlomo Adelman, announced as the high school’s valedictorian and salutatorian two students who “embody the core values of our yeshiva.” Each “personifies excellence as scholars, leaders, and ba’alei middot,” he said.

Valedictorian Adam Speiser is a divergent thinker who welcomes a challenge.

Adam is a member of the National Honor Society, also named to both the General and Judaic Studies Honor Roll every quarter of his high-school career.

He was selected by the administration as recipient of the University of Rochester’s Bausch & Lomb Honorary Science Award. While this award was earned for his excellence in the sciences, he has also been consistently honored with awards and recognitions such as the Rav Avraham Yitzchak Kook Passion for Education Award, and the Rabbi Meir & Rebbetzin Goldie Fendel Determination & Perseverance Award, which exemplify the quality of character he brings to the school and community.

Adam has been named as an AP Scholar for his performance on his AP exams. He is also a student of the challenging and prestigious Bet Midrash program.

While at HANC, Adam pursued a multitude of extra-curricular interests. He is co-chair of the Bikur Cholim committee and a founder of the Ju-Jitsu club, co-chair of the astronomy club, opinion editor of the HANC Herald, and a member of Torah Bowl, Mathletes, College Bowl, and Chess club. He is also an accomplished pianist and a black belt in Ju-Jitsu.

Adam has a demonstrated passion for Computer Science and plans to pursue it as a major in college. He participated in the Cooper Union Summer STEM Makerspace and took part in NCSY Next Step, an Israel-based summer internship.

After a year at Yeshivat Migdal Hatorah in Israel, Adam plans to attend the University of Maryland as a member of the Scholars Program.

She was selected by her classmates and administration to be Co-President of the National Honor Society. She was named to both the General and Judaic Studies Honor Roll every quarter of her high-school career and is a student of the Bet Midrash program.

She was a recipient of the Ateret Shem Tov Award for distinguished character and a commitment to leading a life of high ethical and moral standards.

Ali was a recipient of the University of Rochester Frederick Douglass and Susan B. Anthony Award for her combination of strong grades, rigorous coursework, community service, leadership, and demonstrated commitment to understanding and addressing difficult social issues.

She was also a winner of the Moshe Flescher Holocaust Scholarship Essay Contest.

In spite of a fear of blood and needles, she consistently served as the chairperson for the blood drive. She considers it an incredible act of chesed to be able to organize something that will have a direct, positive impact on a large group of people in need. Ali has also devoted her time to the young children at Friendship Circle and the young adult population as a member of the Yachad Committee.

Aside from her love of chesed, Ali also has a passion for dance. As Captain of the Dance team she poured her heart onto the dance floor, choreographing exquisite routines week after week and captivating the audience at the annual Rekudiah Dance Competition.

She was also Co-Captain of the Volleyball team and a member of HANC’s competitive Torah Bowl team, peer tutoring program, HPAC, and weekly contributor for the Midreshai HANC newspaper.

After a year at Sha’alvim for Women, Ali plans to study Psychology at Queens College.