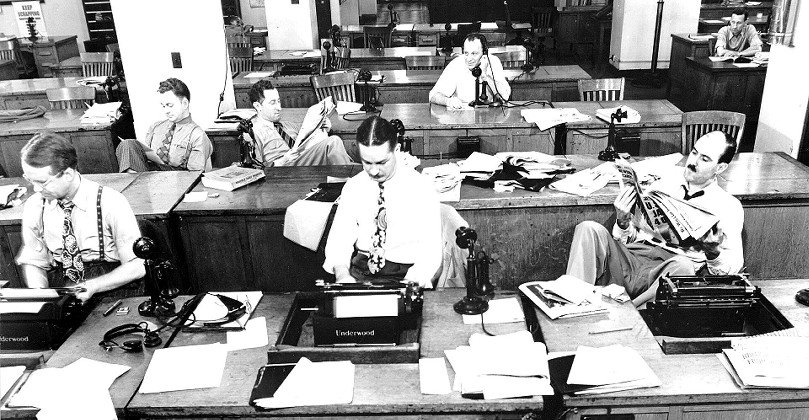 One of the great ironies of our age is the way that the left perpetuates inequality and undermines democracy all the while claiming to be defending these values.”
By Jonathan S. Tobin

How much of what is wrong with the country can be placed on the media? Much of the deep division between left and right — with increasingly little room left in the center — is driven by the fact that most of us only read, listen and watch news outlets that confirm our pre-existing biases, while shunning and even decrying those that do not. To some extent, this is a matter of publications and broadcast outlets simply giving people what they want. Yet that polarization is also magnified by deliberate strategies, rooted in business interests, pursued by journalistic entities that both magnify and exploit that divide.

Part of the reason for this is that journalism has undergone a radical transformation in recent years. A mainstream media culture that prized the pursuit of objectivity, which reached its heyday in the decades after the Second World War, has been largely discarded. It has been replaced by one where most journalists, especially younger ones, deride the very notion of objectivity. Instead, they see themselves as political and cultural warriors whose purpose is to advance political causes.

This sort of bias is now commonplace in our bifurcated political culture in which most of the mainstream corporate media is aligned with the left, ignoring or silencing dissenting points of view and perspectives. That has not only undermined the essential role the press has always played in American democracy, the shift in the culture of the liberal media has also sunk much of our national political dialogue into a morass of woke ideology. That has fueled a moral panic about race and sidelined necessary discussions about other topics, including economic issues, which are, in fact, far more pressing for ordinary Americans.

But what has been lacking in most analyses of this problem is a framework that puts this development in historical context, as well as provides a more sophisticated understanding of how and why it came about. Such a study has long been lacking, but no longer.

In her recently published “Bad News: How Woke Media is Undermining Democracy,” Newsweek deputy opinion editor Batya Ungar-Sargon has provided an in-depth investigation into the decline of American journalism, and the role that class and the snobbery of the elites have effectively erased the interests of working-class Americans from the national agenda. At the same time, Ungar-Sargon has provided an explanation for why this has helped to stoke the fires of anti-Semitism.

Yet what makes these insights particularly important is that this book isn’t another partisan broadside aimed at pumping up either side in our political culture wars. Ungar-Sargon, a former opinion editor at The Forward, is a woman of the left and regards income inequality as the country’s most pressing issue. Yet by holding up a mirror to the contemporary press and tracing the roots of its turn to wokeness to changes in technology, the economy and the beginnings of American journalism, she has provided a devastating portrait of the legacy media’s failures.

Just as important, her recognition of the way woke orthodoxy is ruining the press and hurting the country reflects the way that American politics is being fundamentally realigned, with the Democrats increasingly becoming the party of the educated classes and Wall Street Republicans reflecting the views of blue-collar workers, instead of the other way around.

As Ungar-Sargon writes, partisanship in journalism is nothing new. Indeed, in the era before World War II, most press outlets were firmly on one side or the other — a factor that was mitigated by the existence of so many of them.

As late as the 1950s, New York City had more than a dozen, though even many smaller cities usually had more than one choice. What is often forgotten is that from their beginnings in the 19th century, American newspapers reflected their readers’ economic status as much, if not more, than their political stances.

In the 1800s, Benjamin Day’s New York Sun — the first mass daily — was available for a penny. That made it affordable for even the poorest readers. The Sun and later, Joseph Pulitzer’s even more successful New York World, catered to the interests of the lower classes, providing them with lurid stories about crime that reflected the problems they lived with as well as with support for more rights for working people.

By contrast, Henry Raymond’s New York Times catered to the upper classes, eschewing the sensationalism of their competitors while also making sure to avoid partisanship since he knew that businesses with money to spend on advertising wanted to avoid alienating either major party.

The history of the Times is particularly instructive since its self-conscious positioning as the newspaper of the elites continued under the ownership of a Southern Jewish businessman named Adolf Ochs, who bought it in 1896. Under the leadership of Ochs and then his son-in-law, Arthur Sulzberger, the Times maintained that position as the staid newspaper of record while also doing everything in its power to avoid being labeled as a “Jewish” paper. It does so even to the point of avoiding coverage of the Holocaust, as well as being a persistent foe of Zionism, and giving the State of Israel harsh and deeply unfair coverage.

The paper is currently under the leadership of A.G. Sulzberger, Ochs’ great-grandson. It has, however, undergone a radical shift in recent decades as it discarded its former non-partisanship for a position in which liberal and then leftist political stances, particularly with respect to race, have dominated its news columns and features, as well as the editorial columns. That reached its climax in the summer of 2020 after the death of George Floyd set off a moral panic about race.

The Times newsroom revolted after an otherwise unexceptional op-ed by conservative Republican Sen. Tom Cotton (R-Ark.) about the need to call in troops to restore order if the Black Lives Matter riots were not quelled by police, was published. Those responsible for publishing a view that dissented from the BLM catechism were first humiliated and then pushed out with the publishers’ acquiescence.

What needs to be understood about this is that the willingness of this institution to kowtow to both its woke staff and their leftist readers was a function of both business interests and the culture of journalism, coupled with the moral cowardice of the Times’ editors and publishers.

The decline of print journalism and the shift to the Internet killed many newspapers, though the Times thrived because, like its 19th-century ancestors, it realized that the way to profit from this change was to cater to a specific niche.

Studies have shown that 91 percent of Times readers are liberals. Thus, it made sense for it to only publish news and opinion that made those readers comfortable and reinforced their own illusions about their superiority over the “deplorables” of the working classes who voted for Donald Trump in 2016 and again in 2020.

That involved people who were willing to pay not only for digital subscriptions but those whose education and income levels made them a prime audience for upscale advertising. As Ungar-Sargon points out, there is no contradiction between the Times’ style magazine having a picture of a Communist activist and race huckster like Angela Davis on its front cover while an ad for a Cartier watch is advertised on its back cover.

This was also reflected in the way it and other mainstream media outlets reported the news. Crises that afflicted poorer readers, like the opioid epidemic, received little coverage. By contrast, liberal media went overboard with stories about race even in an era in which Americans are far less racist than before. Also making the pages, of course, was anything negative about Trump, such as the Russia collusion hoax.

This was also made possible because most journalists themselves were different from their predecessors. Up until fairly recently, most members of the press came from working-class backgrounds, not elite universities. But by the 21st century, those joining top mainstream journalism outlets became almost exclusively filled with such graduates, more likely than not coming from upper-middle-class and wealthy families.

The focus on race and the acceptance of woke ideological constructs like critical race theory and intersectionality that young journalists have embraced was exemplified by the Times’ “1619 Project,” which falsified American history in order to present a view of the United States as not merely having a flawed past but as irredeemably racist. These theories aren’t motivated by a desire for greater equality, as did by those 19th-century papers that reflected their working-class readers’ views. CRT and intersectionality oppose equality since they see race as a permanent and insuperable barrier between people.

What Ungar-Sargon points out is that this allows elites to ignore economic inequality and “transforms economic guilt into racial guilt.” Obsessing over a problem that can’t be solved also allows the affluent to keep their status and to think it is a function of their own “superior virtue.”

One of the great ironies of our age is the way that the left perpetuates inequality and undermines democracy all the while claiming to be defending these values.

In this way, the working class, which liked Trump, was erased by the racial moral panic.

She also writes that it also accounts for the way the same liberal elites in journalism are willing to mainstream critical race theory that grants a permission slip for hatred of Jews as beneficiaries of alleged “white privilege.” In this manner, the great “awokening” in the press has also mainstreamed anti-Semitism while elite liberal Jews look the other way or ignore this tragic development.

The picture she paints of a smug mainstream press staffed by well-off members of the educated classes is a disturbing one that explains a great deal about what’s wrong with journalism and America in the 21st century. She hopes that this can be corrected by consumers of the news choosing to “starve the people making money off your emotions” and rage, and seek to understand those with different points of view and carve nonpolitical spaces in people’s lives.

But as long as major media outlets are not only exacerbating our divisions but profiting from them, it’s difficult to see a path out of this abyss of wokeness.