Ukraine showdown and the American crack-up 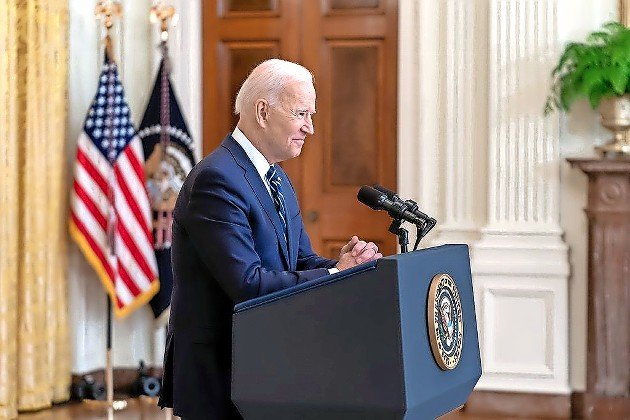 President Joe Biden at his first official press conference in the East Room of the White House on March 25, 2021.
White House Photo by Adam Schultz

Not only is the Biden administration enabling the break-up of NATO, it is also destroying America’s deterrent power and superpower position.”

Ukraine is far from the only place where there is zero connection between the administration’s policies and its communications strategy.”
By Caroline Glick

From Washington to Berlin to Warsaw to Kyiv, everyone says that only Russian President Vladimir Putin knows what he plans to do with the 120,000 troops he has deployed to the Ukrainian border. But at this point, even if Putin decides not to invade, even if he withdraws all of his forces from the border zone, he has already won a strategic victory of historic proportions against the United States.

Without firing a bullet, Putin and his 120,000 soldiers have fomented the unofficial — but very real — break-up of the NATO alliance. NATO is rightly considered one of the most successful military alliances in history. It was founded in 1949 at the outset of the Cold War between the Soviet Union and the United States. Its purpose was to deter the Soviets from trying to expand their empire from Eastern and Central Europe into Western Europe.

Today, NATO cannot act collectively against Putin in a coherent way because Germany no longer views Russia as a strategic threat, and no longer views the United States as a leader it needs to follow.

How has this situation come about? Much of the credit goes to Putin, who has been working toward this point for 15 years.

Putin recognized that when used strategically, Russian energy exports could drive a wedge between NATO members. Traditionally, Russian natural gas exports to Europe went overland through Poland and Ukraine. This meant that energy supplies to Germany and Western Europe were dependent on Russian energy exports to former Soviet bloc countries, and Germany needed to protect Poland and Ukraine to protect its own interests.

In 2006, Gazprom, Russia’s oil and gas conglomerate, unveiled its plan to lay an underwater pipeline across the Baltic Sea that would transport natural gas directly to Germany, bypassing Poland and Ukraine. Shortly thereafter, then-German Chancellor Gerhardt Shroeder left office. A month after he departed the chancery, Shroeder announced that he had taken a position as the chairman of the board of directors of the Gazprom subsidiary responsible for laying the gas pipeline.

The message was clear. Germany had agreed to delink its strategic energy and economic interests from the former Soviet republics and Poland, which had joined NATO in the aftermath of the Cold War, and from Ukraine.

Today we see that Putin’s Baltic Sea gas pipeline — now known as Nord Stream 2 — did precisely what he hoped it would do. Over the past few weeks, the Germans have made little effort to hide that they are siding with Russia against Ukraine and their NATO allies.

Germany prohibited NATO member Estonia from transferring weapons to Kyiv, and when Britain sent an arms shipment to Kyiv earlier in the week, the British were careful not to fly over Germany. They didn’t ask the Germans for permission to cross their airspace, because they assumed the Germans would deny the request. In other words, London recognized that Germany, the linchpin of NATO, is pitching for the other team, but didn’t want to make a stink about it.

But with all due respect to Putin and his successful use of energy exports as a strategic weapon, he couldn’t have pulled Germany away from NATO without Biden. Indeed, gas exports from Russia are more an excuse than an explanation for Germany’s moves.

The Germans feel free to walk away from their commitments to their NATO allies because they realize that the Biden administration won’t make them pay a price for their behavior. Like German Chancellor Olaf Sholtz, Biden has no intention of lifting a finger to protect Ukraine from Russia.

When Nord Stream 2 was announced, the Bush administration immediately understood the implications for NATO and strongly objected to the project. Barack Obama and his vice president Joe Biden also strongly opposed the pipeline.

As the construction of Nord Stream 2 neared conclusion in 2019, then-President Donald Trump imposed sanctions on all firms involved in the project. Trump’s intention was clear. Since Nord Stream 2 is geared toward breaking up NATO by driving a wedge between Germany and the Western European members on the one hand and NATO members Poland and the Baltic states on the other, to protect NATO, Trump decided to make every entity that endangers it pay a steep price.

Given Biden’s long record of opposing Nord Stream 2, going back to his days in the Senate, there was good reason to believe that he would maintain Trump’s sanctions. But President Biden rejected the views of Vice President and Senator Biden.

Last May, President Biden canceled Trump’s sanctions on Nord Stream 2 participants. And last August, the Biden administration cut a deal with Germany over Nord Stream 2. The deal was one which no German leader in their right mind could object to, and no US president who sought to prevent the NATO crack-up could support. Under the terms of the deal, the United States dropped its opposition to the operation of Nord Stream 2 in exchange for a vague German commitment to do something for Ukraine.

If Biden’s abandonment of US opposition to Nord Stream 2 wasn’t enough to convince Germany and Russia (and Ukraine) of his rank unseriousness in everything related to Ukraine and NATO, Biden’s amazing acknowledgment during a news conference that “a minor incursion” of Russian forces into Ukraine would not be met with a unified response from NATO ended any residual doubt. Despite the administration’s fervent clean-up efforts, Putin got the message, and so did the rest of the world.

It’s important to note that Biden’s decision not to block Russia from invading Ukraine is eminently defensible. Ukraine is not a member of NATO. And while the United States certainly supports Ukrainian independence, America’s interest in Ukraine’s sovereignty does not outweigh its interest in avoiding a war with Russia.

Had they been inclined to do so, Biden and his advisers could have easily made the case for non-intervention in a way that would have secured both NATO and America’s credibility as a superpower to its adversaries and allies alike.

Instead, seemingly on an hourly basis, the administration is ratcheting up its war-mongering rhetoric and threats against Russia. On Tuesday, Pentagon spokesman James Kirby said that Biden had ordered 8,500 troops in Europe on alert.

Apparently, the Russians, Ukrainians and the rest of the world were supposed to take Kirby’s announcement as proof of Biden’s seriousness of purpose. But the opposite is the case. Kirby’s statement was utterly meaningless. He didn’t say which troops were on alert, or on alert for what. He didn’t mention what mission the alerted troops had received.

And almost at the same time Kirby made his meaningless announcement, Biden said that no US forces would be deployed to Ukraine.

More than Biden’s surrender on Nord Stream 2, it is the complete disconnect between Biden’s actual policy and his strategic messaging policies that make governments like Germany’s realize that they will pay no price for acting with US adversaries against the United States. Busy turning America into a joke on the world stage, Biden will have no interest in punishing Berlin for betraying NATO, and America.

Ukraine is far from the only place where there is zero connection between the Biden administration’s policies and its communications strategy. Biden’s Iran policy is equally disingenuous and self-destructive. Biden and his team claim that the purpose of the nuclear talks with Iran in Vienna is to prevent Iran from becoming a nuclear armed state. But the agreement the United States is negotiating with Iran will guarantee Tehran will become a nuclear armed state in short order.

The implications of Biden’s foreign policy for the United States are clear enough. Not only is the administration enabling the break-up of NATO, the Biden administration is also destroying America’s deterrent power and superpower position.

As for Israelis, and other threatened US allies watching from the sidelines, the take-home lesson of Ukraine is clear: No US security guarantee can outweigh independence of action. To survive, a nation requires strategic, economic and energy independence, and the will to wield it.