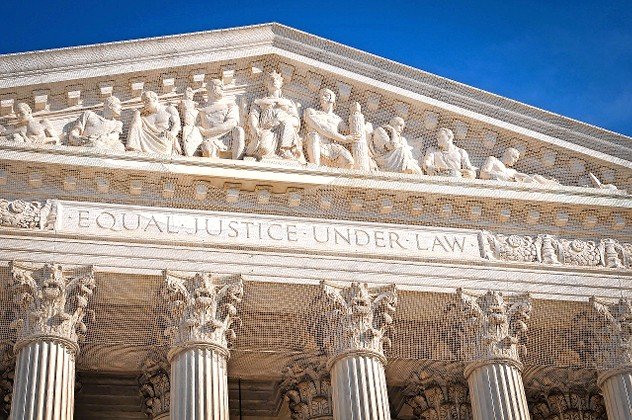 The US Supreme Court building in Washington, DC.
Brandon Bourdages/Shutterstock

As long as revolutionary progressives maintain their control over key US national institutions, Republican election victories will be insufficient to save the US and restore liberty to its citizens.”

If Twitter stops censoring conservatives and voices from the ideological and political right, the progressives will lose their monopoly control of social media.”
By Caroline Glick

America is in the throes of a revolution. As historian Victor Davis Hanson has noted, progressives now control nearly every national institution — Wall Street, Silicon Valley, universities, local school boards, teachers’ unions, the entertainment industry, the vast majority of the media, the Justice Department, the FBI and the US military, and currently, the White House and both houses of Congress.

Progressives have been using their control over these institutions to change both the character of the United States and the rules of the game in a manner that will enable them to perpetuate their power regardless of the sentiments of the American people.

They are rewriting American history, taking aim at G-d and believers, and at the nuclear family, while indoctrinating children against their families and their country. There is no area of human endeavor that progressives have not politicized.

One of the last national institutions where the conservatives hold sway is the Supreme Court. And last Monday, the Supreme Court came under a malicious assault whose clear goal is to subvert its independence. In a move without precedent, Politico published a draft Supreme Court decision written by Justice Samuel Alito, a member of the Court’s conservative majority.

Today’s Supreme Court comprises five conservatives, one centrist and three progressives. Alito’s draft explained why the 1973 Roe v. Wade decision, which removed the power of states to determine the legality of pregnancy termination, making abortions legal nationwide, was unconstitutional and overturned it. If Alito’s draft decision, which was supported by his fellow conservative justices, becomes final, the power to determine the legality of pregnancy termination will devolve back to the individual states.

The issue of abortion, which goes to the questions of what it means to be a human being, and whether or not life is sacred, has been the foundation of the culture wars in America between liberals/progressives and conservatives since 1973.

First, the leaker wished to intimidate the conservative justices into abandoning their plan to strike down Roe v. Wade by stirring up a violent mob.

Second, the leaker sought to incite righteous rage among progressives, that will pressure the two remaining moderates in the Democratic majority in the Senate to vote to abrogate the Senate filibuster. By preventing Republicans from using the filibuster, the razor-thin Democrat majority will be able to ram through radical legislation ahead of their expected losses in the congressional elections in November.

In every sphere of public endeavor, progressive politicians, bureaucrats and activists have met public opposition and protest with tyranny and rebuke.

One of the main weapons in the progressive arsenal is disinformation — the deliberate distortion of information to advance an agenda. Consider Twitter, the social media platform purchased last month by Elon Musk, the world’s richest man.

Over the past decade, Twitter became the social media network with the largest influence on the public discourse. No self-respecting journalist, activist or policymaker can afford not to have an active account.

Twenty years ago, the internet and the social media platforms it generated became the largest free market of ideas in human history. They were also the engine for political victories for conservative politicians in the United States. For the first time, the internet gave conservative candidates the ability to communicate directly with voters, without the mediation of liberal/progressive media behemoths.

All of this began to change during Obama’s presidency, as more and more conservative voices suffered a spectrum of sanctions, from shadow bans, which blocked their audience from seeing what they were posting, to banishment from Facebook and other social media platforms. The process accelerated and became more extreme in the aftermath of Trump’s defeat of Hillary Clinton in the 2016 presidential race.

Trump’s victory was a grave embarrassment for the Silicon Valley oligarchs. Clinton blamed them for her loss. Her basic claim was that had Facebook, Twitter and Google not permitted the Trump campaign more or less the same use of their platforms as they ostensibly offer everyone, Trump would not have won. As Clinton and her supporters put it, Mark Zuckerberg, Jack Dorsey and their colleagues were supposed to prevent Trump and his supporters from “disseminating disinformation,” that is, campaign materials, on their platforms. Freedom of expression, Clinton and her supporters insisted, wasn’t for everyone.

Chastened, to prevent Trump’s reelection in 2020, Zuckerberg donated $340 million to election non-profit groups he founded for the purpose of increasing Democrat vote numbers in key swing states like Wisconsin, Michigan, Arizona and Georgia. At the same time, Facebook and Twitter initiated a censorship campaign against Trump and his supporters the likes of which no one had ever experienced.

That censorship campaign reached its height weeks before the election, when the New York Post published the contents of Hunter Biden’s laptop. President Joe Biden’s son, a crack addict, had abandoned his laptop in a repair shop in Delaware. After his efforts to return the laptop were unsuccessful, the owner of the store turned its contents over to the FBI because the computer contained evidence that Biden and his family may have committed several felonies.

At a minimum, the contents of the laptop exposed that Hunter Biden and his uncle Jim Biden had pocketed millions of dollars from foreign firms with direct ties to the Chinese, Ukrainian and Russian governments. Hunter Biden seemed to implicate his father in the influence-peddling operations in several of his emails.

The Post story was explosive because it was entirely true. It was Hunter Biden’s laptop. All the details of the deals were authentic. They exposed a web of influence peddling with hostile governments that made clear that Biden and his family were ripe for extortion by those governments.

Yet, rather than allow their platforms to be used to inform the American people of this information, Twitter led the way in preventing the public from hearing about it. Twitter de-platformed the New York Post and private users who dared to link to the story. Facebook followed suit. Fifty retired US intelligence and security chiefs proclaimed the story was “Russian disinformation.”

It took a year for the New York Times and Washington Post to admit that the laptop was indeed Hunter Biden’s laptop and that the New York Post stories were entirely true. In the meantime, in the name of fighting “disinformation,” Twitter, Facebook, Google and other internet giants had denied the American people access to information that, as post-election polls made clear, would have swung the election in Trump’s favor.

Since its first days in office, the Biden administration has openly pressured technology giants to increase their censorship and block conservative voices, claiming that such silencing and suppression is necessary to fight racism and fake news. One recent effort that gained enormous attention was the progressive campaign to get superstar podcaster Joe Rogan kicked off of Spotify.

And then along came Elon Musk, who purchased Twitter for the jaw-dropping sum of $46 billion with the declared purpose of removing the platform’s progressive censors and enabling Twitter to once again serve as a free marketplace of ideas and information.

Progressives rightly view Musk’s action as a strategic threat. Its implications are obvious: If Twitter stops censoring conservatives and voices from the ideological and political right, the progressives will lose their monopoly control of social media.

Three days after Musk completed his purchase, the administration turned its apoplectic fit into official policy. Homeland Security Secretary Alejandro Mayorkas announced the establishment of a Disinformation Governing Board. To run the board, Mayorkas appointed a 33-year-old “disinformation expert” named Nina Jankowicz. Jankowicz, who was an outspoken supporter of the social media platform’s decision to censor the Hunter Biden laptop story, is the author of two books calling for political censorship to prevent “disinformation,” that is, information that undermines the progressive agenda.

If Republicans are able to win control over Congress in November, there is little doubt that Biden’s ability to implement his domestic agenda will be constrained. But so long as revolutionary progressives maintain their control over key national institutions in America, Republican election victories will be insufficient to save the United States and restore liberty to its citizens.