There’s no one to talk to now in Washington 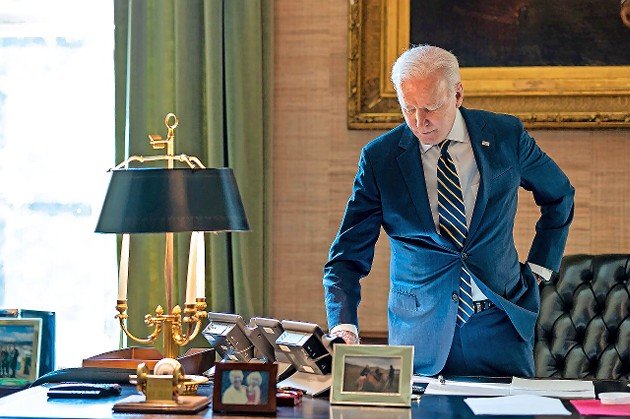 Biden and his advisers may believe that Iran becoming a nuclear breakout state outside an agreement could be politically advantageous for them going into the midterm elections.”
By Caroline Glick

Last Tuesday, Israel Hayom reported that there is a growing sense among Israeli and US officials that the Biden administration will not reach a nuclear accord with Iran. To be understood, the report has to be seen in the context of a statement made later on Tuesday by President Joe Biden’s press secretary Jen Psaki.

During her daily press briefing, Psaki said that the administration assesses that Iran is just weeks away from nuclear breakout capabilities. Nuclear breakout is reached when a state achieves the independent wherewithal to develop nuclear weapons. A nuclear breakout state does not necessarily have nuclear weapons, but is regarded as a nuclear-armed state because it has the capacity to build a nuclear arsenal at will and within a relatively short period.

But the content of Obama’s nuclear agreement and the leaks regarding the content of the deal that Biden’s team is negotiating make clear that the opposite is the case. The content of both makes clear that far from preventing Iran from becoming a nuclear-armed state, the intended end of the both agreements was and remains enabling Iran to become a nuclear armed state, equipped with the economic wherewithal and diplomatic power to dominate its neighbors in the region.

The limitations the 2015 deal placed on Iran’s nuclear operations were insignificant when compared with the carte blanche Iran received to develop more advanced nuclear capabilities. While Iran was ostensibly curbing the quantities of low-enriched uranium it was permitted to stockpile under the deal, it was developing advanced centrifuges capable of enriching uranium to bomb-grade levels. Those capabilities are permanent, whereas the restrictions Iran accepted on the nuclear activities it was carrying out in 2015 were temporary.

The most optimistic projections claimed that the 2015 deal kept Iran a year away from nuclear breakout. That view was disputed by then-President Barack Obama, who admitted that at the end of the lifespan of the deal in 2030, Iran’s breakout time would be reduced to zero.

The most optimistic assessments of Biden’s sought-for nuclear deal claim it will keep Iran four to six months from nuclear breakout from the moment the Iranians decide to cross the nuclear threshold.

This brings us to the claims by Psaki, other US officials and senior Israeli officials last week that the Iranians are currently weeks from nuclear breakout.

The Foundation for Defense of Democracies in Washington, D.C., has been one of the leaders of the campaign for harsh economic sanctions against Iran in response to its nuclear weapons program for the past 15 years. On March 3, the FDD published a report titled “Iran Approaches the Nuclear Threshold.” The report set out the timeline of Iran’s nuclear advances over the past four years. In May 2018, then-President Donald Trump withdrew the United States from Obama’s nuclear deal with Iran due to Iran’s breaches of the substance and spirit of the agreement. In May 2019, Iran announced that it was renouncing its commitment to the limitations on its nuclear activities it had accepted under the deal.

Despite their announcement, the Iranians did very little to openly expand their nuclear operations. Their restraint had three sources. First, they feared eliciting a harsh response from Trump. Second, they wished to empower the Democrats, who had officially committed to reinstating the US commitment to Obama’s nuclear deal upon retaking the White House.

Finally, the frequent sabotage assaults against Iran’s nuclear facilities along with the assassinations of Iran’s senior nuclear scientists and officials, attributed to Israel, kept the Iranians off balance and forced them to devote their main efforts to defense, rather than to moving forward with their nuclear capabilities.

Shortly before Biden was inaugurated in early January 2021, the Iranians abrogated their agreement to the most significant aspects of the nuclear deal’s inspections regime and increased their level of uranium enrichment from the 3.67% purity permitted under the 2015 deal to 20%. In February 2021, Iran began producing uranium metal, which is mainly used to produce the core of nuclear weapons.

Around the initiation of the nuclear negotiations in April 2021, the Iranians increased their level of enrichment yet again, to 60% enrichment, which is 99% of the way to weapons-grade enrichment levels. They enriched the uranium with advanced centrifuges they developed after agreeing to the nuclear deal in 2015.

If the Biden administration’s goal really was to prevent Iran from developing nuclear weapons, Biden and his advisers would have responded forcefully to Iran’s actions. They would have strengthened the standing sanctions and imposed additional ones. But instead, Biden and Secretary of State Antony Blinken stopped enforcing key sanctions and so enriched and empowered Iran still further and awarded the ayatollahs for their brinkmanship.

The Biden administration blocked the UN’s International Atomic Energy Agency from publishing a harsh report condemning Iran’s massive breaches of the 2015 nuclear deal and outlining its illicit nuclear activities. The State Department has released reports on Iran’s breaches of its nuclear limits, in accordance with US law. But it watered down the language to make it seem that Iran’s behavior is acceptable.

The United States has responded weakly to Iran’s wanton aggression against Saudi Arabia and the United Arab Emirates. In the first days of the administration, Biden removed Iran’s Yemeni proxy the Houthis from the State Department’s list of foreign terrorist organizations, and has kept the Houthis off the list despite their escalating attacks on the UAE, Saudi Arabia and US forces in those states.

In January, a Twitter account associated with Iran’s dictator Ali Khamenei posted an animated video of an Iranian hit squad assassinating Trump on his golf course.

In summary, both the content of the nuclear deal that Biden seeks to achieve and the administration’s permissive responses to illicit Iranian nuclear and terror operations make clear that Biden’s true object is to facilitate Iran’s acquisition of nuclear weapons and hegemonic power, even at the expense of US allies, strategic interests and national security.

This returns us to Tuesday’s report that the Biden administration may be ready to pull the plug on nuclear negotiations and on achieving a new deal to limit Iran’s nuclear operations.

While it is clear that Biden’s desired diplomatic end state is to get a new nuclear agreement with Iran that may extend Iran’s nuclear breakout time from a few weeks to four to six months at the outside, it’s possible that the administration may be willing to see Iran become a nuclear breakout state outside an agreement. While this is clearly not Biden’s preferred outcome, Biden and his advisers may believe that it could be politically advantageous for them going into the midterm elections in November.

If Iran crosses the nuclear threshold outside the confines of a nuclear deal, Biden and his advisers may believe that they will be able to blame Trump for the outcome.

Since taking office, despite the fact that Iran only began to significantly step up its nuclear operations after he was elected, and mainly since he entered office, Biden and his advisers have been insisting that Trump is responsible for Iran’s actions. According to their reasoning, if the United States had remained in the nuclear deal, Iran would not have begun breaching its commitments to restrain its nuclear behavior.

As for Israel, the Bennett-Lapid-Gantz government gives the impression that Israel’s leaders think Biden’s rhetoric is more important than his actual policies. Prime Minister Naftali Bennett and his partners like Biden’s attacks against Trump because those attacks are aligned with their own attacks on former Prime Minister Benjamin Netanyahu. Almost every day since forming their government last May, Bennett, Foreign Minister Yair Lapid and their colleagues have insisted that had Netanyahu not proved to Trump that Iran was breaching the 2015 deal and that the Iranians had lied to the Americans about their intentions, Trump wouldn’t have abandoned Obama’s nuclear deal and Iran wouldn’t be weeks from nuclear breakout.

Although reports of sabotage of Iranian nuclear and drone installations still pop up from time to time, the volume of reports has dropped precipitously since last May. Upon entering office, the Bennett-Lapid government promised the United States total transparency in Israel’s operations in Iran. The implication was that Bennett and Lapid were giving the administration veto power over Israel’s operations.

Without effective inspections of Iran’s nuclear and missile sites, it is hard to know just where Iran stands in terms of moving from breakout capacity to an actual nuclear arsenal. Israel estimates it will take Iran a year or two to move from where it ostensibly stands today on the brink of independent capacity to develop and deploy nuclear weapons to actually possessing deployable nuclear weapons.

Despite the uncertainty about when precisely Iran will become a nuclear power, what is absolutely certain is that so long as the Biden administration remains in power, Israel’s leaders’ faith in Washington endangers its existential interests.