Theodor Herzl and the Jews’ leap of hope

He was a Jewish dream-catcher, living his phrase that became a cliché: ‘If you will it, it is no dream.’ 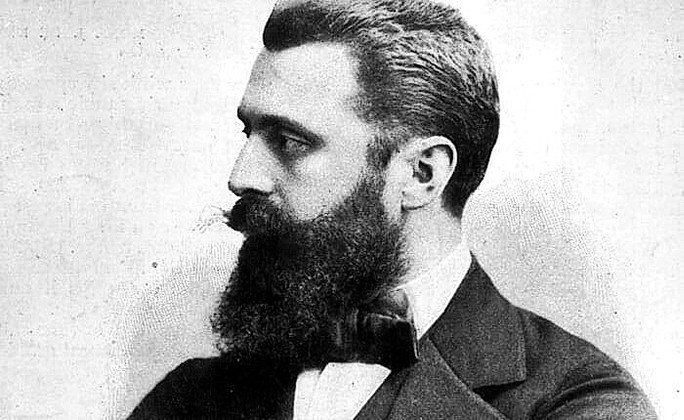 Herzl remains the one essential Zionist leader 118 years after his death and 125 years after he convened the First Zionist Congress.”
By Gil Troy

This introduction to the new three-volume “Theodor Herzl: Zionist Writings” is by Gil Troy, who edited the set. The inaugural publication of the Library of the Jewish People, it is being published this month to mark the 125th anniversary of the First Zionist Congress.

Today, Theodor Herzl is best known for his beard, not his books, for an aha-moment he never had, for being an anti-anti-Semite rather than an idealist and for launching the Zionist movement in 1897 — 18 months after he released his history-changing Zionist manifesto.

One-hundred-and-eighteen-years after his tragic death at the age of 44, and 125 years after he convened the First Zionist Congress in August 1897, Theodor Herzl remains influential. His outsized shadow — and the true, complicated, multi-dimensional person behind the myth — are precisely why it is so important to read his Zionist writings in this new edition which, fittingly, is also inaugurating the Library of the Jewish People.

It was a perfect match: The People of the Book got themselves a bookish savior.

On these pages, Herzl works out his ideas, works through his problems, works his contacts and works himself to death trying to hustle a Jewish state into being. These pages demonstrate that Herzl was not just another bookish Jew. As a proud Jewish nationalist seeking to revive the independence Jews celebrate at Chanukah, he was also a Maccabean, a fighting Jew, a Jew with a spine and spunk, not just a Jew with a mind and soul.

The diaries’ rollicking, free-flowing nature make them among the most easily misquoted and misunderstood sources in the Zionist canon. Anti-Zionists frequently rifle through Herzl’s writings, cherry-picking an entry here, a phrase there, to indict the entire Zionist enterprise as “ethno-nationalist,” “racist,” “imperialist,” “colonialist” or in today’s popular phrase “settler-colonialist.” These volumes confirm that the often vain, petty, thin-skinned and imperious Herzl was not perfect and very much a turn-of-the-century European. Nevertheless, this historical scavenging tells us little about Herzl’s Zionism and much about Zionism’s enemies — who daily demonstrate Herzlian Zionism’s biggest failure: It did not end anti-Semitism.

The diaries record the cascade of feelings and ideas as Herzl’s Zionism evolves. He shifts from imagining a novel explaining his vision to drafting a manifesto charting out the Jewish future to trying to make his dreams come true. It is a brainstorming book, which is why extracting one line here or there to define the man or the movement distorts the diaries’ freewheeling, free-associational character.

Day after day, Herzl’s Jewish consciousness and self-importance grow, along with his doubts. His life has become a high-wire act, with big ideas, great thrills and historic stakes.

Perpetually struggling with tone and self-definition, Herzl writes that “artists will understand why I, otherwise of rather clear intelligence, have let exaggerations and dreams proliferate among my practical, political and legislative ideas, as green grass sprouts among cobblestones. I could not permit myself to be forced into the straitjacket of sober facts. This mild intoxication has been necessary. Yes, artists will understand this fully. But there are so few artists.”

As a result, Herzl’s diaries frequently read like the political-science version of an artist’s sketchbook. He draws in the contours of the Jewish state. He plans different dimensions, from a flag to the architectural aesthetic, from labor-capital relations to the dynamics between rabbis and politicians. Sometimes, he is more playwright than architect, as when he plots out the Jews’ redemption in three acts from “Introduction” to “Elevation” to “Emigration.”

On these pages, Herzl emerges as the Zionist Organization Man, building an infrastructure for the movement that would eventually become a provisional government and then today’s sovereign government of Israel. He emerges as the Great Jewish Diplomat, advancing the Zionist project by leveraging relationships while exploiting anti-Semitic assumptions that the super-rich Jews could buy themselves out of exile. He emerges as the Jewish dream-catcher, living his phrase that became a cliché: If you will it, it is no dream. And he emerges as the Liberal-Nationalist Tinkerer, generating ideas about how to make the Jewish state into a model that saves the Jews and inspires the world.

First, what made him tick? Why did this ambitious, outer-directed, journalistic hotshot and somewhat successful, somewhat frustrated playwright become a Jewish visionary and leader?

Second, what did he accomplish in barely a decade on the Jewish stage?

And third, what made him the one? How is Herzl the Modern Moses: Of all the Jews’ leaders, of all the Jews’ thinkers, of all the proto-Zionists who sometimes grumbled that they came to the party first, how did he become the face of Zionism and the prophet credited with transforming millennia of Jewish trauma and longing into today’s Jewish-democratic state?

Herzl’s diaries show that even in his thirties, he felt the angel of death hovering about. He sensed his heart would not keep him going for much longer. In 1897, when he was 36, Herzl wrote a will, explaining: “It is proper to be prepared for death.” Sure that “my name will grow after my death,” he trusted that “a future generation will be better able than the masses of the present to judge what I meant to the Jews.”

He deemed these writings, “in which I have recorded my work on behalf of the Jewish cause,” his “principal legacy.” Even he, the great Jewish dreamcatcher, grandiose enough in his Zionist career, began to imagine that we would still be reading his writings more than a century later. But he was not as sure about an even bigger legacy: a thriving Jewish state which still horas — and waltzes — to some of his rhythms.

The most popular story about Theodor Herzl’s Zionist awakening is fun to tell. It conveys an essential truth about Zionism and about Herzl’s path from European man of letters to Jewish patriot. Yet it overdramatizes, oversimplifies and overshadows other truths about Herzl’s more torturous lifelong journey as an emancipated Jew seeking freedom and dignity daily in an increasingly Jew-hostile Europe.

Nevertheless, for years we have heard the Disneyfied version: about this elegant, cultured European, a model Jew freed from the ghetto to be a lawyer, a playwright, a journalist. A turn-of-the-century Middle European with piercing eyes and a beautiful black beard, fluent in Magyar, German and French, having been born in Hungary, educated in Austria and working now in Paris for Vienna’s most prestigious newspaper.

nd there he is, so sure that he fits in, that he belongs, covering the treason trial of the French Army Captain Alfred Dreyfus.

The Parisian crowds are seething. After all, in the 1890s, nationalism is rising. The French feel proud of their Frenchness, the Italians of their Italianness, the Germans of their Germanness. And a traitor, accused of smuggling secrets to the enemy, threatens the nation, body and soul. Still, in January 1895, the crowds don’t just shout “Down with Dreyfus” or “Down with the traitor” but “À mort! À mort les Juifs (Death to the Jews)!”

How could this happen?

Herzl wonders, reeling, even before it becomes obvious that conniving Jew-haters framed Dreyfus. We Jews have worked so hard to be accepted. Yet, we are always suspect. And even if one of us is guilty, why does that crime condemn us all? Only when Jews have a proper sense of nationalism, a proper state of our own, a Jewish state, will we be respected and truly free.

Herzl plunges ahead. Before you know it, it is 1897 and he is addressing the First Zionist Congress in white tie and tails. When the conference finishes, he acknowledges that people may mock him, but within half-a-century there will be a Jewish state.

Israel’s establishment in 1948 proves Herzl right. Being off by just one reality-check-of-a-year allows fans to chuckle at how close the Zionist prophet’s prediction was.

The story is delicious. It is dramatic. It is a useful parable. It covers much ideological territory vividly and efficiently.

Essentially two scenes explain the European liberal nationalist context that spawned Zionism, the anti-Semitism that turned so many Jews into Zionists and the Zionist quest for pride, dignity and national salvation. This cinematic plot tracks the Zionist trajectory from Wandering Jews to Rooted Jews, from homelessness to homeland, from powerlessness to power, from victim to victor, from broken ghetto Yid to muscular Israeli.

Moreover, much of the legend is true. Herzl covered the Dreyfus case. And the Jew-hatred was palpable, persistent and brutal.

But Herzl’s conversion didn’t occur in a flash. He had been struggling with Jew-hatred and trying to define a sense of Jewish peoplehood his whole life. Herzl did not initially report the story as crowds shouting “Death to the Jews,” but “Judas! Traitor!” although he admittedly helped simplify his story and embellish his own legend over the years.

Finally, decades before Herzl’s Zionist Congress launched the formal Zionist movement in August 1897, the momentum had been building.

In 1862, Moses Hess wrote “Rome and Jerusalem: The Last National Question.” In 1882, the first group of BILU Palestine pioneers arrived in the Land of Israel. In 1890, Nathan Birnbaum coined the word “Zionism.” In 1895, David Yellin transformed Naftali Hertz Imber’s 1878 poem “Tikvatenu” into “Hatikva,” which became the Zionist and then the Israeli anthem. Other voices were demanding justice.

Herzl himself rocked the Jewish world in February 1896, with his Zionist manifesto “Der Judenstaat—The Jewish State.” And, perhaps most importantly, we see that Herzl’s Zionism entailed more than anti-anti-Semitism.

This romantic liberal-nationalist ends his pamphlet with a sweeping, idealistic, constructive vision that not only proves he was not the Garrison Zionist most people believe, but demonstrates the power of liberal nationalism to redeem a people and the world.

“The Jews who want a state of their own will have one,” Herzl writes, democratically acknowledging those who wish to stay in the Diaspora. “We are to live at last as free men on our own soil and die peacefully in our own homeland.”

Then he soars, as every liberal-nationalist should, building up universal hopes and values, not putting up walls and barriers to idealism: “The world will be freed by our freedom, enriched by our riches and made greater by our greatness.”

How lucky we are to be his heirs, to inherit a state that he helped create, rather than being born into the much harsher, more insecure world he inherited from his ancestors.

Professor Gil Troy is the author of “The Zionist Ideas.” This was first published in Jewish Journal.