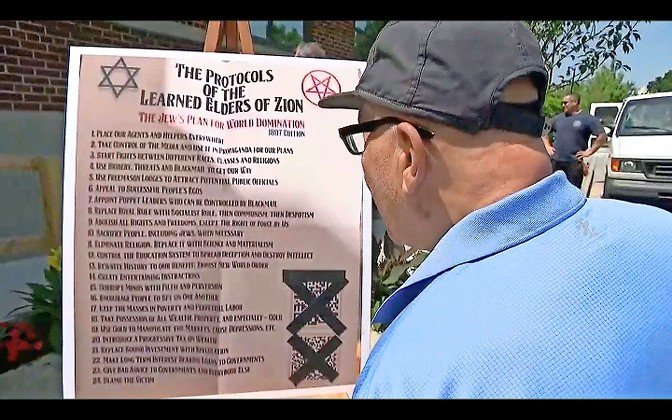 An enlargement of one of the anti-Semitic flyers that was left at homes in Rockville Center.
News12 Screenshots 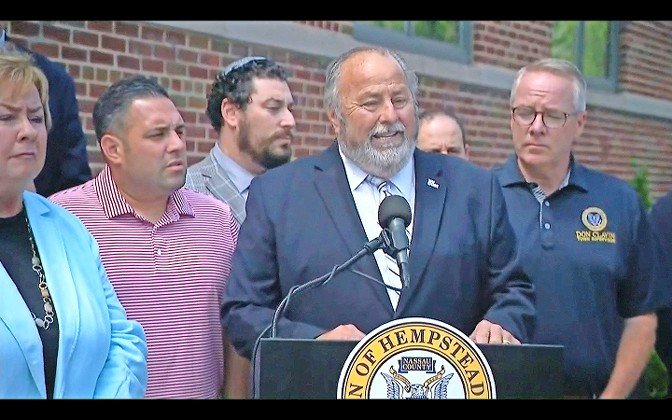 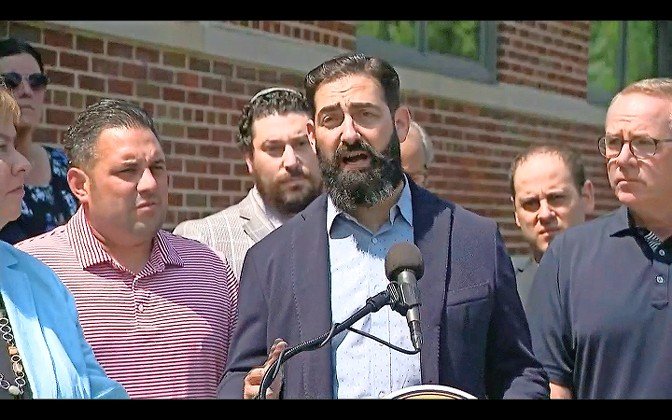 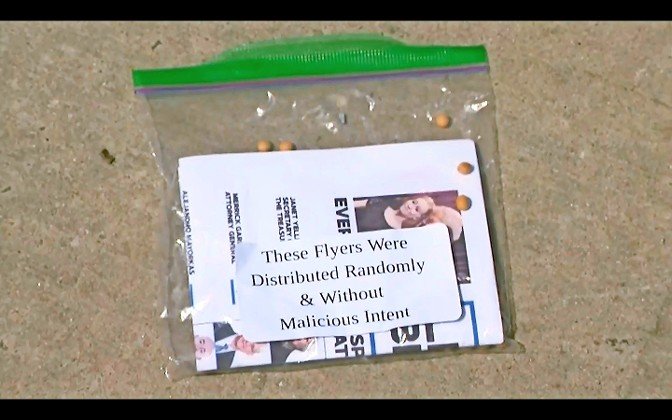 One of the small plastic bags left at homes in Rockville Center, Oceanside and Long Beach.
News12 Screenshot
Previous Next
For The Jewish Star

Jew-haters who believe the Holocaust is a myth and that Jews were masterminds behind the Sept. 11, 2001, terror attacks delivered vicious anti-Semitic literature onto the front lawns, sidewalks and driveways of homes in Rockville Centre, Oceanside and Long Beach this week.

The literature — in small plastic bags weighed down with uncooked rice or beans — focused on “The Jew’s Plan for World Domination,” with references to the COVID-19 pandemic, a Biden administration controlled by a “Jewish cabal,” and various other conspiracies.

One of the flyers, displayed on a large posterboard by officials on Friday, at the first of several press conferences held before and after the weekend, referenced “The Protocols of the Learned Elders of Zion,” an early 20th century work of fiction that remains a bible among anti-Semites around the world.

The flipside of one of the flyers included popular rightwing tropes including “Let’s Go Brandon.”

“Every single aspect of the Biden administration is Jewish,” it continued.

The anti-Semitic language sparked outrage among local residents, elected officials and police. Some called for legal action against the perpetrators, who officials believed to be affiliated with the Goyim Defense League, a loose confederation of internet trolls who spread conspiracy theories involving Jews. The Anti-Defamation League said the group was responsible for at least 74 anti-Semitic propaganda incidents in 2021 in several states.

“This communication is meant to alarm people, to harass people, and to create an atmosphere of terror,” Blakeman said. “If it was a valid, free speech communication, why did these cowards do it in the middle of the night? Why don’t they disclose who they are? They’re like KKK, who used to wear hoods. They’re nothing more than cowards. And we’re going to stand up to those cowards. We will not tolerate that kind of hate speech.”

“They ride by like a newspaper guy in the morning, chucks it out the window onto your lawn, to your sidewalk,” said Nassau County Police Commissions Patrick Ryder of the flyers.

He said about 30 residents, many but not all of whom are Jewish, told police they received the flyers, although he believes the number is higher.

“It’s not accepted here in this county,” Ryder told a Monday news conference in Hewlett, outside the Fourth Precinct.

Detectives believe that a white 2009 or 2010 Toyota Prius may be involved as such a vehicle was seen on video from doorbell cameras in the vicinity where the fliers were distributed.

Rabbi Elie Weinstock of the Jewish Center of the Atlantic Beach, who is chairman of the Nassau County Legislative Council on Anti-Semitism, said “the community is outraged and getting … exasperated and fed up that these incidents keep repeating. There’s a boiling caldron of hate and anti-Jewish sentiment that is creeping into the communities and people are disturbed.”

Hempstead Town Councilman Anthony D’Esposito said residents are concerned for the safety of their families.

“When they wake up in the morning, their kids, their grandchildren are running out the front door to find leaflets filled with hate,” said D’Esposito, Republican candidate to succeed retiring Democratic Rep. Kathleen Rice in the 4th CD.

“This isn’t a Republican issue, it’s not a Democrat issue, this is an American issue,” he said. “It’s not just about acts of anti-Semitism and hate against the Jewish community. We need to stand up against hate against all people — whether it’s racial, religious, political, it doesn’t matter. The world that we live in deserves peace.”

“Hate has no home in Rockville Centre,” said Mayor Francis Murray. “The board of trustees and I, along with our residents, are infuriated and disheartened to see hateful propaganda being distributed in our village.”

Electeds beyond Long Island weighed in as well.

“These offensive tropes and despicable conspiracy theories have no place in our state,” tweeted Gov. Kathy Hochul.

Rabbi David Lerner of Congregation B’nai Sholom-Beth David in Rockville Centre said such flyers are becoming a “growing trend throughout our country.”

“Under no circumstances can we remain silent in the face of the vile filth being disseminated by extremist groups seeking to poison our community with their repulsive rhetoric,” state Senator Anna Kaplan said in a statement.

This isn’t the first brush with hate Rockville Centre has had in recent months.

A resident complained at a village board meeting last April about the presence of a menorah on a residential street, and expressed fears that Orthodox Jews would come to coerce local businesses into observing the Jewish sabbath.

“You may think it could never happen here, but trust me, none of us living in the Five Towns thought it could happen there, either,” she said at the time.

Rabbi Mendel Gurkov, who leads Chabad of Rockville Centre, said he received a letter from Zangari acknowledging her statements were anti-Semitic and she apologized.

The Proud Boys — a neo-fascist group tied to the Jan. 6, 2021, US Capitol insurrection — marched twice through Rockville Centre, meeting condemnation from local leaders each time.

Herald Community Newspapers, whose secular publications are distributed in the three communities targeted by the flyers, published an editorial calling what happened “repugnant” and “disgusting,” but saying the hate literature was protected by the First Amendment.

“Every one of us should condemn what was found on those pamphlets, but at the same time we must take caution not to entertain thoughts about outright banning them,” the editorial said. “It’s an unfortunate side effect of the First Amendment.”

Reporting from multiple sources, including the Rockville Centre Herald.