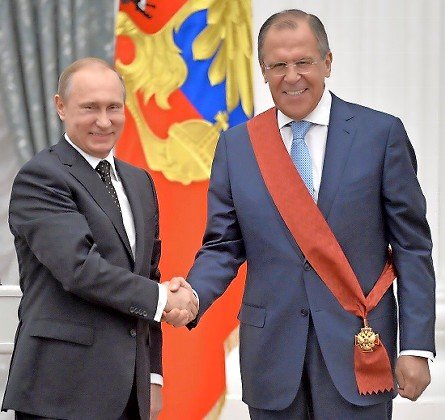 Russian President Vladimir Putin with Russia’s Foreign Minister Sergey Lavrov being awarded the Order of Service to the Fatherland, 1st class, at the Kremlin in Moscow on May 21, 2015.
Kremlin via WikCommons

Since 1945, no state (not even Iran) has contributed to the distortion of the Holocaust as extensively as has the Soviet Union and then Russia.”
By Ben Cohen

There is no way of knowing for sure.

According to a statement issued by Bennett’s office after his phone call with Putin last Thursday, “the prime minister accepted President Putin’s apology for Lavrov’s remarks and thanked him for clarifying his attitude towards the Jewish people and the memory of the Holocaust.” But a Russian read-out of the same phone call contained no mention of an apology, just plenty of assertions designed to reinforce in the mind of the reader that Russia, like Israel, is a solemn guardian of Holocaust memory.

That notion is frankly obscene, especially as Russia’s historic abuse of the Holocaust goes much further than Lavrov’s remarks.

Indeed, what Lavrov said telescoped many of the anti-Semitic tropes that prevailed in both Imperial Russia and the Soviet Union. In an interview with Italian television, Lavrov repeated the Russian government’s insistence that Ukraine is governed by neo-Nazis, despite the fact that President Volodymyr Zelensky is Jewish.

“How can there be Nazism in Ukraine if he is a Jew? I may be mistaken but Adolf Hitler had Jewish blood, too,” stated Lavrov. “This means absolutely nothing. The wise Jewish people say that the most ardent anti-Semites are usually Jews.”

The overarching concept here is that of a conspiracy so sinister that the Jews themselves willfully stir up anti-Semitism. There is an obvious precedent for this — the falsehood that Zionist leaders in Europe assisted the Nazis with their extermination program was a staple of postwar Soviet propaganda, as Moscow sought to shore up its support in the Arab world during the Cold War.

At the same time, the Soviets defamed Israel as a Nazi-like state, much as Putin’s regime is doing now with Ukraine.

From the 1960s to the 1980s, the Soviets churned out a seemingly endless series of ugly tracts with titles like “Judaism Without Embellishment” and “Beware: Zionism.” One 1975 pamphlet titled “Zionism and Apartheid” portrayed Israel as the reincarnation of the Nazi regime while directly connecting it to the racist regime in South Africa. “Racial biological doctrines, according to which people are divided into ‘chosen people’ and goyim, have been turned into official ideology and state policy in Israel and South Africa, where the ‘inferior’ are forcibly separated from the ‘superior,’” the pamphlet ranted.

Meanwhile, in 1982, a Palestinian student named Mahmoud Abbas submitted his Ph.D. dissertation to Moscow University with the title, “The Secret Connection between the Nazis and the Leaders of the Zionist Movement.”

This sorry record tells us that Russia does not “carefully preserve the historical truth about the events of those years and honor the memory of all the fallen, including victims of the Holocaust,” as the Kremlin statement claimed. In fact, the reverse is true; since 1945, no state—not even Iran—has contributed to the distortion of the Holocaust as extensively as has the Soviet Union and then Russia.

Putin reportedly reminded Bennett “that out of the 6 million Jews tortured in ghettos and concentration camps killed by the Nazis during punitive operations, 40 percent were citizens of the USSR, and asked to convey wishes of health and well-being to the [Red Army] veterans living in Israel.”

These words were carefully crafted for foreign — primarily, Israeli and American — consumption. For if Putin was really serious about honoring the memory of the Holocaust, he would spend less time baiting Zelensky and more time reckoning with his own country’s poisonous legacy.

In that sense, whether or not Putin apologized to Bennett for Lavrov’s comments specifically doesn’t really matter. The only statement that would count is exactly the statement that the Kremlin is incapable of delivering because doing so would quickly unravel the themes about the Nazi era that are packaged into Russia’s accompanying propaganda war over Ukraine.

The underlying point is that unlike Germany, Russia has never expressed official contrition for the centuries of Jew-hatred unleashed by its priests, nobles, intellectuals and party apparatchiks. Good dictator that he is, Putin has nurtured Jewish support through his own office, backing initiatives like the ambitious Museum of Jewish History in Moscow and cultivating a close relationship with the Chabad-Lubavitch movement and Chief Rabbi of Russia Berel Lazar, but he has never once addressed or apologized for Russian state anti-Semitism. He even had the temerity to suggest during a 2016 meeting with leaders of the European Jewish Congress (EJC) that European Jews anxious about anti-Semitism in their own countries would do well to move to Russia.

“Let them come to us!” Putin is said to have exclaimed. “During the Soviet period, they were leaving the country, and now they should return.”

That last sentence was breathtaking in its dishonesty.

By and large, Jews were not leaving the country during the Soviet period because the Soviet authorities actively prevented them from doing so! Hundreds of Soviet Jews suffered torture and imprisonment as a result of their efforts to make aliyah, as well as to study the Hebrew language, the Jewish religion and anything that smacked of the “anti-human reactionary essence of Zionism,” as the Great Soviet Encyclopedia memorably put it.

What would a genuine Russian apology look like? To begin with, it would need to list the episodes that cemented Russia’s fearsomely anti-Semitic reputation.

This would include, but not be limited to, the pogroms unleashed by the tsarist “Black Hundreds”; the blood libels promoted by the Russian Orthodox Church; the fabricated Protocols of the Elders of Zion published by the tsar’s secret police in 1903; the banning of Hebrew after the Bolshevik Revolution; the anti-Semitic campaigns engendered by Soviet leader Joseph Stalin; the incarceration of Soviet Jewish refuseniks; and the myriad slanders against Zionism and Israel in official propaganda.

The substance of the apology would be grasped through a simple acknowledgment of the facts of all these cases, ending the combination of lies, denials and evasions that has disfigured Soviet and Russian attitudes towards the Jewish people.

As long as Vladimir Putin is in the Kremlin — and as long as Russia remains a violently nationalist dictatorship with designs on its neighbors — such an apology remains wishful thinking.

There is only one stance to adopt when Russia talks about the Jews and the Holocaust, even in the conciliatory tones that Putin used with Bennett: skepticism, skepticism and more skepticism.