Thanks to an intifada-by-media, whole world is wrong about Israel 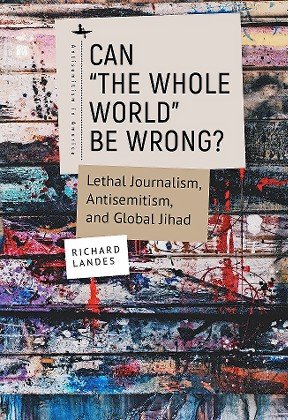 A war of lies and language endangers not only the Jewish state, but the West itself.”
By Phyllis Chesler

From the moment Yasser Arafat launched his long-planned second intifada against Israel in 2000, the most brazen lies about both Jews and Israel were relentlessly told and widely believed. For years, master propagandists in cyberspace, the Western media and academia managed to diabolically invert reality. The entire world believed an utterly false narrative.

Landes is a historian and a scholar of apocalyptic movements. He is the author of eight books and countless articles and maintains a formidable website, The Augean Stables. He is also a consummate wordsmith. For example, he coined the phrase “Pallywood” (Palestinian Hollywood) to describe the Palestinians’ tactic of staging theatrical productions in war zones in order to create anti-Israel propaganda disguised as news.

In his book, Landes proceeds blood libel by blood libel, beginning with the iconic death of Mohammed al-Dura, a Gazan child allegedly murdered with malice aforethought by cruel Israeli soldiers. With his death caught on video and immediately blamed on Israel, even though the video proved no such thing, al-Dura became the boy whose image has graced a thousand mugs and t-shirts, inflamed the entire world and led to countless Muslim atrocities, including suicide bombings, shootings, knife attacks and car-rammings against Israeli civilians.

As Landes notes, the initial reporting on the incident was malicious and incendiary: “The (flawed) footage and its accompanying narrative immediately went viral, then mythical. The footage was spectacular, as emotionally powerful as the dogs attacking Black protesters in Birmingham (1963), and the terrified Vietnamese girl running down the road naked, aflame with napalm (1972). …

“Despite extensive problems with the footage … journalists piled on the story. … It became the icon of hatred for the 21st century. One cannot overestimate its impact.”

“The role of al-Dura as incitement is clear,” Landes writes, “and if the damage was less than the old European pogroms, it’s only because the Israelis could defend themselves as the Jews of Kishinev could not.”

Landes also reminds us that Osama bin Laden used al-Dura in a recruiting video for global jihad and that the first Palestinian suicide bombers featured al-Dura in the videos they left behind.

They had enthusiastic collaborators in the media. Landes notes, “The news anchor Catherine Nay (Europe News, Decryptage, 2003) commented: ‘With the symbolic power of this photo, the death of Mohammed nullifies, erases that of the boy, hands up in front of the SS in the Warsaw Ghetto.’ Emmanuel Brenner (Naibed, 2007) laid out the reasoning: ‘Really, “these people” [the Jews] behave as badly as we do. The shame of the Holocaust no longer exists! The death of Muhammad had wiped out the boy in the ghetto.’”

Palestinian poet Mahmoud Darwish went so far as to write an ode about the “cold-blooded shooter,” described scenes “on camera” that did not exist and invoked the “baby Jesus.”

In Landes’s view, the way in which Western journalists handled the story “constitutes one of the most monumental failures of professional journalism in the long and volatile history of war journalism.” Indeed, a ballistics analysis later found that the bullets that killed al-Dura could not have been fired by IDF soldiers. Unsurprisingly, the media refused to report it.

Landes explains that this had implications beyond the Israeli-Palestinian conflict. Language, he asserts, has been “weaponized” and “devalued” in order to “spark outrage and moral panic.”

He notes, correctly, that “Israel was the first strong, global manifestation of this narrative-induced moral hysteria, the first massive moral disorientation of this century. Since then, the lack of contact with reality upon which it is built has only widened its scope. … Currently, we are trying to think with a deeply corrupted vocabulary, with terms that have been emptied of substance, even as they remain emotionally charged.”

The recent massive rise in attacks against Jews has not led to greater support for Landes’s work. But it has led to daily, even hourly reporting of crimes against Jews — and to hearings and resolutions. Commissions, conferences, legislatures and international bodies are devoting sessions to it. The very same Jewish organizations that once minimized the phenomenon are now appealing for funds to tackle it. They are trying to keep themselves in business by promising to address the antisemitism they failed to address.

In the early 21st century, various United Jewish Appeal chapters focused on restructuring their mission, but did not mention antisemitism. By contrast, New York UJA’s current fundraising campaign focuses heavily on antisemitism, as do the donation pages of the Conference of Presidents and the ADL.

But do American Jewish organizations really have a plan to create an Iron Dome against blood libels? Does Landes have any suggestions?

He believes that we need to reread the media intifada that started with al-Dura in order to understand how facts and reality were twisted, inverted and exchanged for lies by the woke left and the media, and that this has led to the prevailing narrative of Israel as an inherently evil force and Palestinians as perpetual victims.

Landes also suggests “courage,” a willingness to face public “shame” and even physical harm for the sake of the truth, as the only way to resist anti-Western barbarism.

“We are in the fight of our lives,” he says, “a fight for the civilization that made Blake’s vision of a world of mental strife rather than carnal slaughter possible. Our fight is with those who think truth and honor come from dead corpses and dominion.”

Landes wants us to choose life over death: “To embrace life is to accept vulnerability but also to ask for reciprocity. … Engaging openly and without defenses with people who despise such principles and long for dominion, even as you turn against those who, for almost four millennia, have been dedicated to those principles, defines folly and epitomizes astounding stupidity. In embracing life, the rewards correspond to the demands. Choose life, however difficult.”

This book is an important history lesson, especially for those who were not yet born when the blood libels began, but who now face metastasizing Jew-hatred on campus and in the streets.