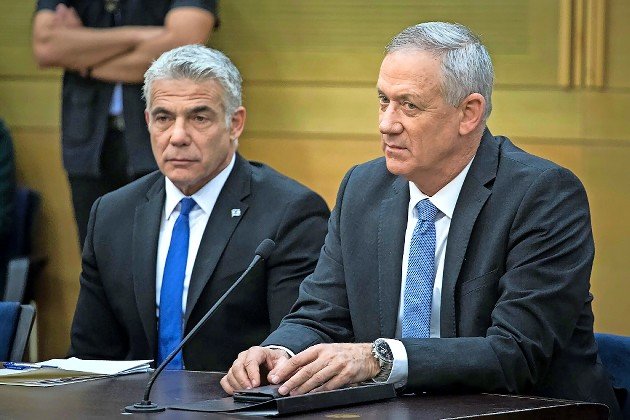 By treating Hamas — a terrorist organization ideologically committed to annihilating Israel and the entire Jewish people — as the responsible adult in the room, Israeli gave legitimacy to an actor that is morally, militarily, ideologically and politically illegitimate.”

Operation Breaking Dawn was a tactical success but a strategic failure that legitimized Hamas and undermined Israel’s position in the battle against Iran.”
By Caroline Glick

Operation Breaking Dawn was a textbook illustration of Israel’s tactical brilliance and prowess on the one hand, and strategic blindness on the other.

Tactically, Israel’s Iron Dome system allows its civilians to remain almost entirely unharmed while terror armies pummel Israel’s cities and villages with missiles and rockets. So too, Israel has developed precision-guided weapons and operational intelligence capabilities which in combination enable it to conduct pinpoint assaults against targets and destroy them with little to no collateral damage.

From Friday through Sunday, Islamic Jihad shot nearly a thousand projectiles at Israel. But largely thanks to Iron Dome, no Israelis were harmed by direct hits. In precision strikes, Israel was able to eliminate Islamic Jihad’s commanders.

However, while Israel’s leaders are right to trumpet the operation’s tactical, technology-based success, Operation Breaking Dawn was a strategic fiasco on multiple levels.

The first level of strategic failure is the operational one. Breaking Dawn was precipitated by Islamic Jihad’s decision to respond to Israel’s arrest of its senior operative Bassem Sa’adi early last week in Jenin with a threat to carry out a mass casualty attack on Israeli civilians and military personnel from Gaza.

According to Egyptian mediators, Israel agreed to consider releasing Sa’adi and perhaps another Islamic Jihad terrorist in exchange for a ceasefire. If the Egyptian announcement is accurate, then Islamic Jihad will be able to present its missile assault as a victory. By lobbing a thousand projectiles at Israeli cities from Gaza, the terror group was able to coerce Israel into freeing terrorists in Samaria.

Even better, from Islamic Jihad’s perspective, for the four days that preceded Israel’s initiation of Operation Breaking Dawn, the government ordered more than a million Israelis to remain in their homes and closed rail service and the major highways connecting population centers in southern Israel to the rest of the country. That four-day lockdown, based solely on Islamic Jihad threats, was the greatest victory the terror group ever achieved.

Israel’s operation demonstrated the depth of the strategic challenge Gaza poses. Islamic Jihad is a wholly owned subsidiary of Iran’s Revolutionary Guards Corps, which founded it in 1988 and still arms and commands its operations today.

Islamic Jihad used to be seen as a mere nuisance in the Gaza Strip. But this week it showed it has amassed an arsenal capable of presenting Israel with a massive security challenge. Even worse, it has just a fraction of the capabilities that Hamas enjoys.

Hamas is not a wholly owned subsidiary of Iran, but it is an Iranian client. Hamas receives funding and arms from Tehran. Its leaders are in direct, intimate contact with the Iranian regime, which they brag about. Hamas chief Ismail Haniyeh was in Tehran last April to participate in Iranian President Ebrahim Raisi’s inauguration. Hamas’ tens of thousands of missiles cover nearly all of Israel. Its anti-aircraft and anti-tank missiles pose a threat to Israeli ground and air operations in Gaza.

Iranian sponsorship isn’t the only thing Hamas and Islamic Jihad share. They are partners. According to media reports, there were Hamas officers in Islamic Jihad command centers all week long. Hamas approved every missile volley Islamic Jihad launched, and provided it with logistical support. Given the intimacy of their cooperation, the fact that Hamas didn’t use its own missiles to attack Israel is a meaningless distinction.

Indeed, it’s worse than that. Pretending that Hamas is not involved in an operation it actually enabled and participated in gives Hamas a free pass for waging war.

But for the Lapid-Gantz caretaker government, none of this mattered. The government and its attendant media insisted Hamas and Islamic Jihad are totally separate from one another, and even rivals. The government’s narrative claimed Hamas was acting like a responsible adult.

Between Friday and Saturday, the IDF’s job quickly moved from attacking Islamic Jihad to ending the operation as quickly as possible to avoid Palestinian civilian casualties that would “compel” Hamas to start shooting its own missiles at Israel.

In other words, the government put the onus on itself. Hamas would come in if Israel made a mistake. Hamas is responsible. It cares about its people. And it will only join the fray if Israel forces its hand.

This false narrative is doubly destructive given Hamas’ actual nature. Hamas isn’t a responsible governing authority. It’s a terrorist organization ideologically committed to annihilating Israel and the entire Jewish people. By treating Hamas as the responsible adult in the room, the government gave legitimacy to an actor that is morally, militarily, ideologically and politically illegitimate.

This is not to say that Israel should have opened a major campaign against Hamas. A caretaker government lacks the political legitimacy to initiate a large-scale conflict. But the government’s kowtowing to Hamas, like its anxious acceptance of Islamic Jihad’s ceasefire terms, was unnecessary and destructive.

Caretaker Prime Minister Yair Lapid and Defense Minister Benny Gantz’s behavior vis-à-vis Gaza is in keeping with the overall strategic blindness that has afflicted this government in relation not only to Iran’s Palestinian proxies Islamic Jihad and Hamas, but also Iran’s Lebanese legion Hezbollah and, indeed, Iran itself.

Lapid and Gantz are poised to accept a deal to transfer some of Israel’s sovereign economic waters to Lebanon. There are two concepts behind the deal, negotiated by the Biden administration.

First, most importantly and like the White House, Lapid and Gantz insist Lebanon is a political entity separate from Hezbollah. This is entirely false. Hezbollah is the most powerful military organization in Lebanon. It has swallowed the Lebanese Armed Forces, which operate at Hezbollah’s pleasure. And it has also swallowed the government, which will not do anything Hezbollah opposes.

The second concept, which flows from the first, is that by enabling Lebanon to develop natural gas fields in the eastern Mediterranean, Israel will empower the government against Hezbollah. This too is entirely false. Hezbollah controls the negotiations. “Lebanon” will not profit from the deal at Hezbollah’s expense. The deal will transform Hezbollah — and Iran — into players in the Mediterranean gas industry, opening up a whole new sphere of profit, as well as potential extortion and blackmail of Israel.

As for Iran itself, from the moment they formed their government with their erstwhile partner Alternate Prime Minister Naftali Bennett, Lapid and Gantz opted to subordinate Israel’s policies towards Iran to the Biden administration. They announced a policy of “no surprises,” which effectively gave the administration veto power over all Israeli operations against Iran’s nuclear installations and other offensive operations.

Since the Biden administration’s central Middle East policy is to reinstate Barack Obama’s 2015 nuclear deal with Iran, the implication of “no surprises” is that Israel agreed to subordinate its confrontational policy towards Iran to the US policy of appeasing Iran.

Lapid/Gantz’s predecessor and nemesis is opposition leader Benjamin Netanyahu. During his long premiership, Netanyahu also sought to avoid major military confrontations with Hamas and Hezbollah. But unlike Lapid and Gantz, Netanyahu did so while adhering to a strategic concept that had the virtue of not only being right, but effective.

Netanyahu recognized that the Palestinians, like Hezbollah, are part of Iran’s war machine. As Iranian Revolutionary Guard Corps General Asghar Emami said in a May 2021 interview, Iran doesn’t need to directly attack Israel because its proxies Hezbollah, Islamic Jihad and Hamas are on Israel’s borders.

Netanyahu adopted an integrated, three-pronged Iran strategy. He sought to deprive Iran of funds to diminish its economic capacity to fund its proxies. He built and used the capacity to carry out near-continuous acts of sabotage against Iran’s nuclear installations and personnel. And he led Israel in waging a full-scale diplomatic war against Iran.

One of the crowning achievements of Netanyahu’s strategy was his success in persuading then-president Donald Trump to withdraw from Obama’s 2015 deal with Iran. Obama’s deal transferred more than $100 billion to Tehran through sanctions relief.

Immediately after the deal went into effect in August 2015, Iran began funneling massive funds to Hamas, Islamic Jihad and Hezbollah, as well as the Houthis in Yemen, enabling them to escalate their wars against Israel and the Sunni states. By walking away from the deal and reinstating US economic sanctions on Iran, Trump set Iran on the road to poverty, and its funding for its terror proxies dried up. Had the policy been continued under Biden, Islamic Jihad would likely not have had a thousand missiles of varying ranges to lob at Israel over three days.

Iran crossed the nuclear threshold in recent weeks for two reasons: First, the Biden administration stopped enforcing sanctions and thus emboldened the Iranians to massively increase their levels of uranium enrichment and stockpiles of enriched uranium. Second, Israel dramatically scaled back its operations in Iran as part of the Lapid-Gantz-Bennett “no surprises” policy.

Netanyahu’s diplomatic war against Iran, even in the face of US animosity, is what drew the Arab states to Israel.

The 2015 nuclear deal threatened the Sunnis no less than it threatened Israel. Netanyahu’s unapologetic opposition to the agreement drew Saudi Arabia, the UAE, Egypt and Bahrain to Israel’s side.

As for the Palestinians, Netanyahu largely ignored them. And when he was forced to fight them, he made clear that they were first and foremost Iranian proxies. His argument was convincing, because it was accurate.

In 2014, recognizing the truth of Netanyahu’s claim, the UAE, Saudi Arabia and Egypt stood with Israel against Hamas, Turkey, Qatar and the Obama administration, which tried to force Israel to accept Hamas’ ceasefire demands.

Over the past week, Lapid and Gantz barely mentioned Iran, despite the fact that Islamic Jihad’s leader Ziad Nahalka was in Tehran the entire time. Their reticence was likely due to the fact that as Iran’s Palestinian proxy pummeled Israel with missiles and rockets, Biden’s negotiators were in Vienna, yet again begging Iran to accept sanctions relief in exchange for a nod to the 2015 nuclear deal.

By hiding the fact that Iran stood behind Islamic Jihad/Hamas’ entire assault, Gantz and Lapid returned the Palestinians to center stage, to devastating effect for Israel.

By giving Iran a free pass, Israel alienated its Arab allies. Instead of supporting Israel, the UAE is co-sponsoring a UN Security Council meeting to discuss Israel’s operation. Saudi Arabia published a full-throated condemnation of Israel’s operation against an Iranian proxy.

It is easy to understand the logic of a limited campaign. But by carrying it out in a state of strategic blindness, the caretaker government legitimized Hamas and undermined Israel’s position in the strategic battle of our times — against Iran.