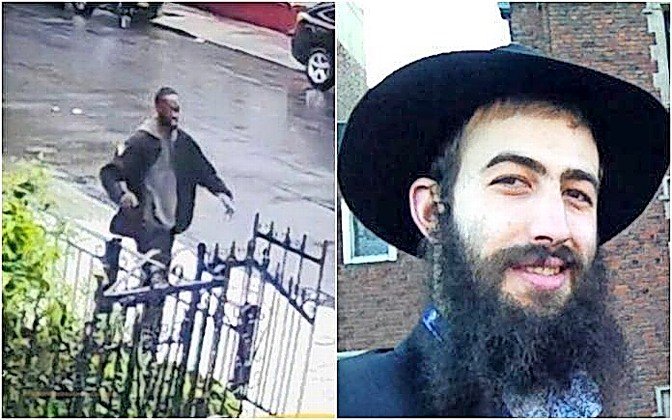 NYPD released a photo of the suspect in the anti-Semitic assault on Rabbi Yehoshua Lefkowitz.

A rabbinic intern at the Great Neck Synagogue was hospitalized after he was violently attacked in an apparent anti-Semitic assault last Friday in Crown Heights.

Rabbi Yehoshua Lefkowitz, 32, was approached by a man who asked, “What are you looking at?”

The man then punched him in the head and kicked him in the legs and told him, “The Nazis should have killed you Jews.”

Crown Heights Hatzalah responded to the incident, at 3 pm on President Street between Utica and Schenectady avenues, and transported Lefkowitz to a nearby hospital.

US Rep. Lee Zeldin of Long Island condemned the attack, calling it “the latest in a disturbing and unacceptable trend of anti-Jewish hate and violence that is spreading throughout our communities, nation and the world.”

“Instead of observing Shabbat at Great Neck Synagogue, Rabbi Lefkowitz was sent to the hospital beaten and bruised,” said Zeldin, a Republican candidate for governor.

“Practicing the Jewish faith should not be a life-threatening endeavor anywhere in the world, but especially not in the United States, where we cherish religious freedom.”

“Many elected officials empower it, and the justice system remains handcuffed,” Zeldin continued. “This has to end now.”

The NYPD’s Hate Crimes Task Force shared images of the assailant on social media, hoping the public can help identify him. The suspect, who ran from the scene, wore a black jacket, gray-hooded sweatshirt, black pants and black sneakers.

Rabbi Chanina Sperlin of the Crown Heights Jewish Community Council said “this is a very troubling and worrisome incident, especially that it occurred in broad daylight,” COLive reported.

“It is important that we find this individual right away and get him off the streets.”