Scoring points in the battle for hearts and minds is important, but that won’t pacify those whose only goal is Israel’s demise 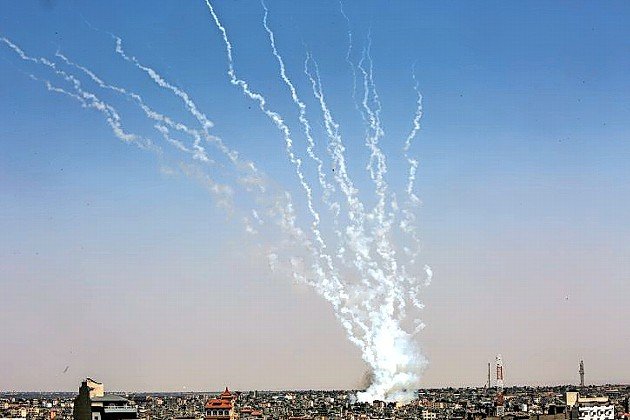 MID-CITY LAUNCH: Rockets are fired toward Israel from Rafah, in the Gaza Strip, on Aug. 7.
Abed Rahim Khatib/Flash90

Israel-bashers continue to treat the Palestinians as victims of Israeli aggression, as if 30 years of Israeli peace efforts and Palestinian rejectionism and terrorism had never happened.”
Commentary by Jonathan S. Tobin

If a ceasefire holds, the latest fighting between Israel and Palestinian terrorists in Gaza won’t have changed much in a conflict that’s already lasted a century. That’s something that should both discourage friends of Israel and hopefully focus them on the only issue that really matters when it comes to the ongoing debate about the struggle with the Palestinians.

That would be Israel’s right to exist, rather than on futile arguments about security or the best way to achieve peace with people who don’t want to make peace.

The Israel Defense Forces may have achieved its stated objectives in Operation Breaking Dawn. Palestinian Islamic Jihad (PIJ), the Iranian-backed terror group, has suffered losses, including the foiling of what was described as a planned major cross-border terror plot, as well as some of its personnel and infrastructure in Gaza. This was accomplished without causing mass civilian casualties — the worst such instance is almost certainly the result of a rocket aimed at Israel that fell short and hit their own people — among those living around the PIJ strongholds while the far stronger forces of its Hamas rivals, who rule Gaza, stayed out of it.

Still, more than 1,100 rockets and other projectiles were fired indiscriminately into Israel from Gaza by PIJ in the past few days. An even higher percentage of them were shot down by the Iron Dome missile-defense system than in past exchanges with Gaza. Though no Israelis were killed by rocket fire this time around, more than a million people throughout the southern part of the country, in addition to residents of Tel Aviv and Jerusalem, were forced to take shelter during these barrages with many spending the nights there.

As with several other such bouts of fighting in and around Gaza over the last 14 years, it ended with Israel offering the Palestinian terror groups “quiet for quiet.” It is, as almost all Israelis know, a problem without a solution.

When former Israeli Prime Minister Ariel Sharon withdrew every soldier, settler and settlement from Gaza in 2005, the stated assumption was that it was giving Palestinians a chance to create a laboratory for coexistence and that the experiment could be easily reversed if things went wrong. When Hamas seized control of Gaza from the Palestinian Authority in a bloody 2007 coup, that assumption was shown to be a colossal blunder.

Though Gaza has been an independent Palestinian state in all but name for 17 years, according to Israel’s critics it is still “occupied.” Every Israeli attempt to silence rocket fire from the coastal enclave or to halt cross-border terrorism — no matter how careful to avoid civilian casualties or how justified it might be — is treated as a war crime by the international “human-rights” community.

The Gaza withdrawal stands as a warning to the Israeli public of the folly of the “land for peace” formula. Absent a sea change in the political culture of the Palestinians, which still binds their leaders to an intransigent refusal to make peace or recognize the legitimacy of a Jewish state no matter where its borders might be drawn, that won’t change. Repeating Sharon’s Gaza experiment in the far more strategic regions of Judea and Samaria (the West Bank) or Jerusalem is viewed by the overwhelming majority of Israelis, including most of those who aren’t supporters of former Prime Minister Benjamin Netanyahu, as insane.

None of this matters to those who bash Israel. Nor does it really change the opinions of even those who claim to support it — like President Joe Biden and members of his party — but insist that it should still “take risks” for peace or keep trying to achieve a two-state solution that the Palestinians have repeatedly rejected.

Israelis can take satisfaction that the United States and many other countries issued statements during the recent fighting about Israel having a right to defend itself. Yet that won’t convince those who buy into the Palestinian narrative about “occupation” and its alleged human-rights abuses to think well of the Jewish state.

The UN Humans Rights Council will continue its kangaroo court investigation of the last conflict with Gaza that took place last May, and since it is an open-ended project, it will likely declare Israeli actions recently undertaken to top PIJ terrorism to be equally criminal.

Nor will it make an impression on the growing ranks of those in the United States who subscribe to intersectional myths about the Palestinian war on Israel being morally equivalent to the American struggle for civil rights or who accept critical race theory myths about Israel and the Jews having “white privilege” and oppressing people of color.

If you check the Twitter pages of Israel bashers in politics, the media or the chattering classes, you’ll find the same tired arguments treating the Palestinians as the victims of Israeli aggression, as if 30 years of Israeli peace efforts and Palestinian rejectionism and terrorism had never happened.

Not one anti-Zionist course being taught on an American college campus will be altered. Nor will the advocacy of groups like Amnesty International, Human Rights Watch, Students for Justice in Palestine, Jewish Voices for Peace or IfNotNow — all of which falsely claim that Israel is an “apartheid state” — be changed as a result of the actions of Islamic Jihad and their Iranian sponsors.

Arguments about the anti-Semitic BDS movement, efforts to restrict US military aid to Israel, or the unreasonable and criminal behavior of Hamas, PIJ or their “moderate” Fatah rivals running the West Bank who reward terrorists and their families with pensions aren’t affected by the facts about the conflict.

If you accept the false Palestinian narrative about Israel being born in sin as an expression of Western imperialism and colonialism, as those who buy into intersectionality and critical race theory do, then it doesn’t matter what the Israelis or their terrorist opponents actually do.

That’s important not just because it speaks volumes about those who regularly libel Israel from the editorial pages of major newspapers or from platforms on liberal cable news networks. It’s also something that both those who speak for Israel — and those groups and individuals who support it — must draw the correct conclusions from.

Talking about the need to ensure Israeli security or the tremendous care that the IDF takes to avoid civilian casualties, which is almost certainly unmatched by any army in the world, seem like important debating points in the discussion about the conflict. The same is true when you remind people about the withdrawal from Gaza in 2005.

But none of that matters to those who think ill of the Jewish state.

There isn’t even much evidence that it does much to rally Jewish opinion behind Israel, which is heavily influenced by biased media outlets and ignorance about the facts of the conflict.

If you accept, as so many Jews have, that it’s somehow unfair that Palestinians don’t have an Iron Dome, or that the perceived imbalance of power means that the terrorists and those they exploit are the underdogs, then history or the true reason for the stalemate is forgotten.

All of this means that while defenders of Israel should always debunk the lies of their opponents, they must also understand that their purpose should be to remind people that Israel has a right to exist and that the goal of its enemies is to deny that right. Once you establish that basic truth, you’re making clear that those who question the right of the Jews to one state aren’t merely wrong but practicing discrimination. Which is to say that they are anti-Semites.

So, rather than being bogged down in security arguments or bragging about the sacrifices Israel has made for peace, which only convince its critics that it is a thief returning stolen property rather than a country whose cause is just, friends of the Jewish state must speak primarily of Jewish rights and about how anti-Zionism is anti-Semitism. Everything else is generally a waste of time and effort.