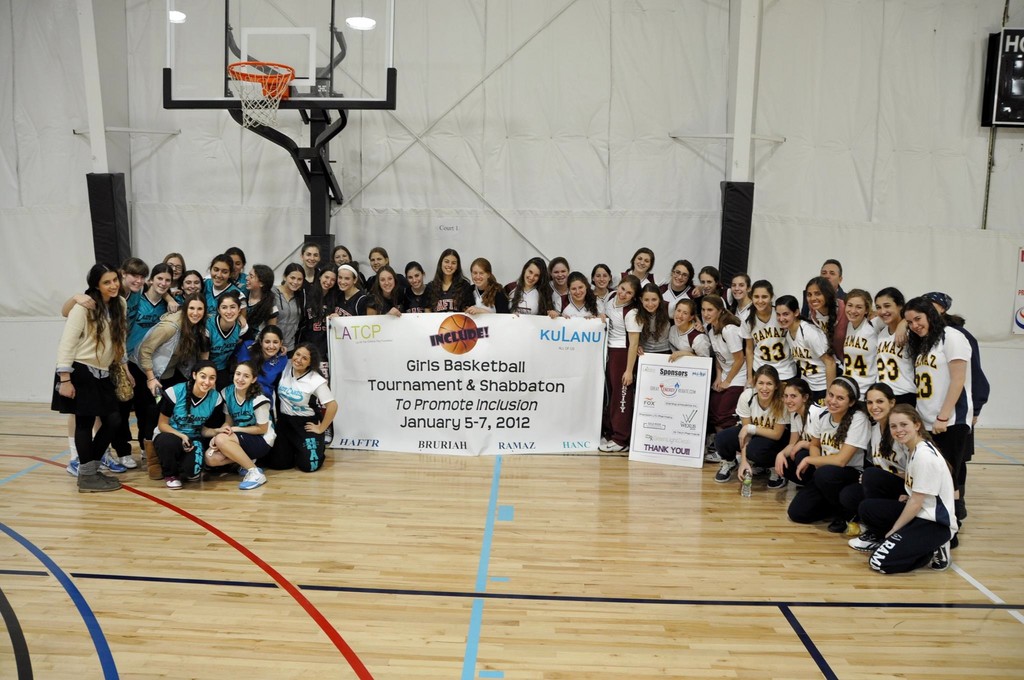 HAFTR’s Lady Hawks come in second place at “Include” tournament .
Courtesy of LATCP
By Michael Sosnick

This week HAFTR had the pleasure of hosting the 25th annual Scott Satran basketball tournament. The HAFTR Invitational Scott Satran Memorial Tournament is a bittersweet occasion. It brings together students from eight different yeshiva high schools to commemorate a HAFTR alumnus, Scott Satran, who passed away 25 years ago from cancer at the age of 20. Every year this event bonds the HAFTR community and seven other schools together in remembrance.

The schools that participated in the tournament this year and their respective teams are: HAFTR and the Hawks, HANC and the Hurricanes, Shaare Torah and the Stars, Rambam and the Ravens, DRS and the Wildcats, NSHA and the Stars, SAR and the Sting, and RTMA and the Thunder.

The tournament started with opening games on Thursday, January 5 and concluded with the championship on Sunday, January 8. The tournament is organized so that each team plays three games from Thursday until Saturday to place in Tier One and Tier Two. On Sunday morning is each Tier’s semi-final game and then Sunday night is the championships. HAFTR defeated HANC in the first game on Thursday, but lost to RTMA the next day. There was a beautiful Friday night dinner to which all of the teams in the tournament and the entire HAFTR community were invited. Robbie Satran, Scott’s brother, spoke during dinner to a captivated audience. Everybody was invited once again on Shabbos day to a wonderful lunch and then a Shalosh Se’udot, a third meal on the Sabbath. Eddie Satran, Scott’s father, spoke very compassionately during lunch. After Shabbos, on Saturday night HAFTR played again and defeated Rambam.

On Sunday morning the teams were split up into the two tiers. HAFTR qualified for Tier One along with DRS, NSHA, and SAR. Tier Two was comprised of RTMA, HANC, Rambam and Shaare Torah. In Tier Two, Shaare and RTMA made it to the championship where Shaare defeated RTMA by one point in a very close overtime game! It was a very fast paced and amazing game of basketball. Sol Wahba, a player on the Shaare Stars, won MVP for their tier. In Tier Two, HAFTR lost to SAR in the semi-finals by four points in a very upsetting, but high-quality game of basketball. Then, on Sunday night, DRS beat SAR in the Tier Two championship by only three points! There were many people in attendance and both teams hustled and played very hard. Yisroel Goldberg, of the DRS Wildcats, won MVP for his outstanding performance.

Everyone who played put their heart into these games but the All Stars were: Eric Shamama and Jason Schlessel from HAFTR, Mitch Blitman and Yoel Schrier from DRS, Michael Kirshblum and Jason Eisman from HANC, JJ Donner and Jordan Kaufman from Rambam, Jacob Matalon and Isaac Antar from Shaare, Zach Goldberg and Shaye Weiss from RTMA, Zach Dicker and Jonny Nulman from SAR, and Jeremy Zborowski and Benjamin Hakakian from NSHA.

The entire tournament was a great success. Thanks are due to Joey Hoenig, the athletic director at HAFTR, and Andi Koppelman, the assistant director of student life at HAFTR, who together worked tirelessly to put such a wonderful and awe inspiring weekend together. The spirit of the whole tournament, including Shabbos activities, served to perpetuate the memory of Scott Satran A”H.

The girls on HAFTR’s Lady Hawks also helped the community through a basketball tournament. This tournament was called “Include” and it included three other schools: HANC, Ramaz, and Bruriah. This tournament worked with Kulanu and Let All the Children Play to help include children with special needs in the Five Towns and in the greater Jewish tri-state area. These girls’ basketball teams invited the children from Kulanu and Let All the Children Play onto the court with them to play basketball. In the end, Ramaz came in first place and HAFTR came in a close second.

This all-inclusive weekend was a heart warming experience for all those involved. It brought many different people together to help others. It was very nice to do this through competitive basketball tournaments in which everyone had fun!