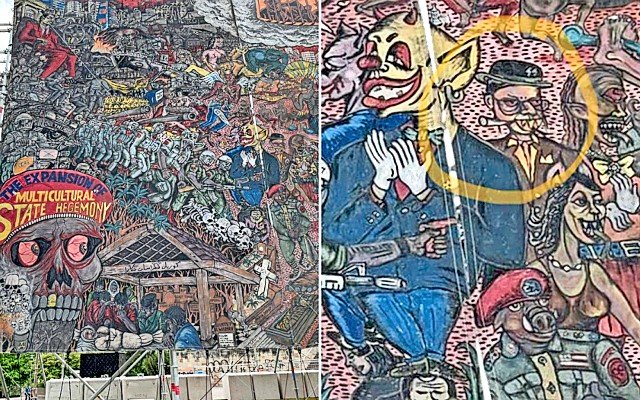 This portion of a mural at the Documenta 15 art festival depicts a presumably observant Jewish man (note the sidelocks, bloodsot eyes, fangs and black hat with the SS insignia).
By Orit Arfa, JNS

Anti-Semitic images at a leading art festival in Germany are being removed or covered up after German Jewish organizations and the Israeli embassy in Berlin came together to denounce the curation.

The images appeared at Documenta 15, a leading arts festival that takes place every five years in the German city of Kassel. The Jewish groups and top German officials, including Germany’s anti-Semitism commissioner at the federal level, Felix Klein, had stated that Jew-hatred on display is indisputable and inexcusable.

“Elements being portrayed in certain exhibits are reminiscent of propaganda used by [chief propagandist of the Nazi Party Joseph] Goebbels and his goons during darker times in German history,” said Shira Ben Tzion, spokesperson for the Israeli embassy in Berlin, in a tweet. “All red lines have not only been crossed; they have been shattered.”

The curation of Documenta was outsourced to an Indonesian group named Ruangrupa. Its support of the BDS movement, which Germany officially considers an anti-Semitic movement, was reflected in the choices of artwork on display, such as the Picasso-inspired “Guernica Gaza,” which parallels the actions of the IDF in Gaza with Nazi Germany’s air raid on the Spanish city of Guernica during World War II.

“The targeted destruction of Guernica with its civilian population was the sole objective of this Nazi war crime,” said the German-Jewish lobby, Werte Initiative, in a statement denouncing the festival. “To equate this with the actions of the Israeli army demonizes the State of Israel. In doing so, a perpetrator-victim reversal takes place that is clearly anti-Semitic.”

A large-scale mural features an image of a Jew with vampire-like fangs, a snake tongue, bloodshot eyes and an SS pin on his hat. In another image, the face of a man identified as a Mossad agent is shaped like a pig.

“This depiction is classic anti-Semitism under state sponsorship and an absolute breach of the dam,” said Elio Adler, chair of the Werte Initiative. “Those responsible must immediately ensure that this work of art is no longer to be seen.”

The work, too large to be removed, has been draped over with a cloth and accompanied by a complementary explanation, much to the chagrin of critics, such as Werte Initiative, who said that the work has been cast by the artists as a symbol of “the impossibility of dialogue.”

“The basis of this disaster is not a lack of dialogue, but anti-Semitism,” said Adler. It is now slated to be dismantled.

Documenta’s questionable choices were condemned across the board by major Jewish organizations, including the Central Council of Jews in Germany and the American Jewish Committee in Berlin, which has called on the festival’s director Sabine Schormann to be relieved from her duties. Her assurances that no anti-Semitic works would be displayed proved hollow.

While the controversial images and tone of the festival have been under scrutiny for several weeks, top German officials, like the Minister of State for Culture Claudia Roth and President Walter Steinmeier, are only now joining the voices expressing disdain.

“As justified as some criticism of Israeli policies, such as the building of settlements, recognizing Israeli statehood means recognizing the dignity and security of the modern Jewish community,” said Steinmeier at the opening ceremony of Documenta. “As Germany’s president I say for my country: Recognizing Israel is the basis and condition for debate here.”

Roth, meanwhile, has walked back her previous defense — in the name of freedom of artistic expression — against the allegations, saying in a statement posted on Twitter: “human dignity, protection against anti-Semitism as well as against racism and any form of misanthropy are the basis of our coexistence, and this is where artistic freedom finds its limits.”

But some critics question the sincerity of these German leaders.

“First, Roth made [the festival] possible and, of course, she knew about everything,” said Chaim Noll, a German-Israeli writer, in a call from his home in southern Israel. Roth, a veteran Green Party politician, came under scrutiny when she first took the position as culture commissioner in 2021 for her friendliness towards the Iranian regime as well as the BDS movement.

“It’s impossible that she didn’t know what was planned to be displayed at the exhibition,” said Noll. “But after it was displayed for several days, and everybody saw what they did and everyone posted photos on the Internet, now she utters her regret. But I don’t buy that. That’s the real scandal in my eyes.”

He thinks Germany needs to take a more appeasing stance towards Israel now that the country is becoming more dependent on Israel for weaponry and even natural-gas exports following Russia’s invasion of Ukraine. “They can’t afford at the moment to make Israel angry.”

The Documenta festival comes on the heels of other controversial, government-sponsored exhibitions that have sounded the alarm of pro-Israel activists. The first was “Hijacking Memory,” a decidedly left-wing conference that featured journalist Peter Beinart and other controversial Jewish critics of Israel. Opponents slammed it for its attacks on right-wing groups and even Israel for allegedly “hijacking” the memory of the Holocaust to promote the nation’s causes.

Goethe Institute also canceled the participation of a writer known for anti-Semitic comments in its upcoming conference on the “global right.” The controversy over these events has gone largely uncovered by mainstream media.

“I’m not sure it was worth the trouble to write about,” said Noll. “It’s the usual group of anti-Israeli Jews we know already from Europe. It’s always the same names, and as long as Claudia Roth is in this position, she will try to fund these usual suspects. She is really a hard-core anti-Israeli person, I think.”