Really, nobody is ignoring the Palestinians 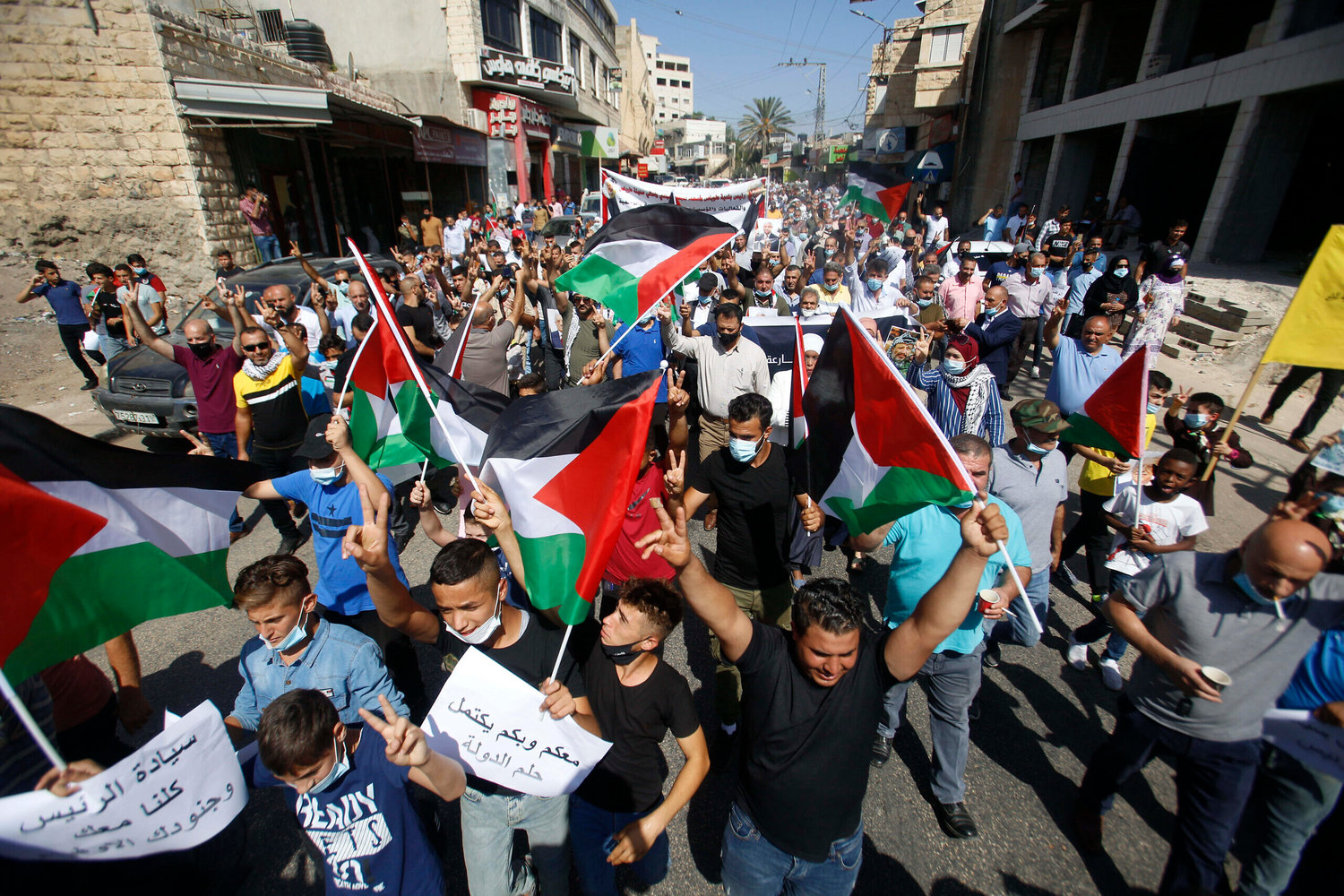 Palestinians hold flags during a rally in support of Palestinian President Mahmoud Abbas in the West Bank town of Tubas on Sept. 27.
Nasser Ishtayeh/Flash90

There is no occupation. No apartheid. No demographic danger. Israel has addressed the Palestinian Arab problem to the best of its ability.”
By Stephen M. Flatow

The common refrain heard from media pundits and left-wing critics of the Gulf kingdoms’ recognition of Israel is that it ignores the Palestinian Arabs. Here is how New York Times correspondent Michael Crowley began his article following the recent signing ceremony:

“Israel and two Arab nations signed agreements at the White House on Tuesday to normalize their relations, a step toward a realignment of the Middle East but one that failed to address the future of the Palestinians.”

This attitude is one-part spite, one-part ignorance and one-part cynicism.

Spite because critics of Israel just can’t stand when anything happens that Israel is happy about. So, they have to almost reflexively pour cold water on it.

Ignorance because some younger critics of Israel probably are genuinely unaware that Israel long ago “addressed the future of the Palestinians” — and implemented the best available solution.

And cynicism because most of the critics are completely aware of what Israel has done. They just don’t want to acknowledge it because it doesn’t suit their agenda.

When Yitzhak Rabin became prime minister in 1992, he faced a dilemma. On the one hand, he recognized that establishing a full-fledged Palestinian state in Judea-Samaria-Gaza would pose a grave threat to Israel’s existence. Israel would be just nine miles wide in its middle, living next to a state run by terrorists and dictators.

But on the other hand, Rabin didn’t want Israel to continue ruling over the Palestinian Arabs who reside in those territories. So he and his aides came up with the Oslo accords. Those agreements ended Israel’s occupation of the Palestinians and gave them something very close to statehood, but without endangering Israel’s existence.

So it was that in 1995, Rabin withdrew Israel’s forces from the cities in Judea and Samaria, where 98 percent of the Palestinian Arabs reside. The Palestinian Authority took over. In 2004, Ariel Sharon took it a step further and withdrew from all of Gaza. Hamas eventually became the ruler there.

Ever since, daily life in those territories has closely resembled what it would be like if they were officially called the “States of Palestine.” There is no Israeli governor or military administration. There are no Israeli troops stationed there. The only time Israeli soldiers enter PA areas is when they are chasing terrorists.

Schools are run by Palestinian principals and teachers. Courts have Palestinian judges. When elections are held, the candidates and the voters are all Palestinians. Both the PA and Gaza have police and security forces the size of armies. And Islam is the official religion of both regimes, according to both the PA’s “Constitution of Palestine” and the Hamas Charter.

There is just one thing Israel has not permitted, and it is in this respect the Palestinian Authority and Gaza are not quite states — they are not allowed to become a threat to Israel’s existence. Meaning that they can’t import tanks, planes, Iranian “volunteers” or North Korean missiles.

As such, Israel imposes a partial blockade on Gaza, preventing weapons and materials that can be used to make weapons (or terror tunnels) from entering. And Israel has set up a small number of checkpoints along its border with the PA areas. But Israel is not occupying the Palestinian Arabs. It is not ruling over them. It is not running their lives.

Naturally, Israel is not offering them citizenship. Why should it? The Palestinian Arabs are ruled by their own regimes, and they can vote there, if and when their leaders let them vote. That’s why the tired old clichés about the “demographic time bomb,” about Israel having to choose between territory and democracy, about the supposed threat of “apartheid,” are all complete nonsense.

There is no occupation. There is no apartheid. There is no demographic danger. Israel has addressed the Palestinian Arab problem to the best of its ability. It gives Israel security and gives the Palestinian Arabs self-rule in two entities that are close to statehood in every respect except those that would endanger Israel’s existence. It’s not a perfect solution. But in this imperfect world of ours, it’s the best solution available.