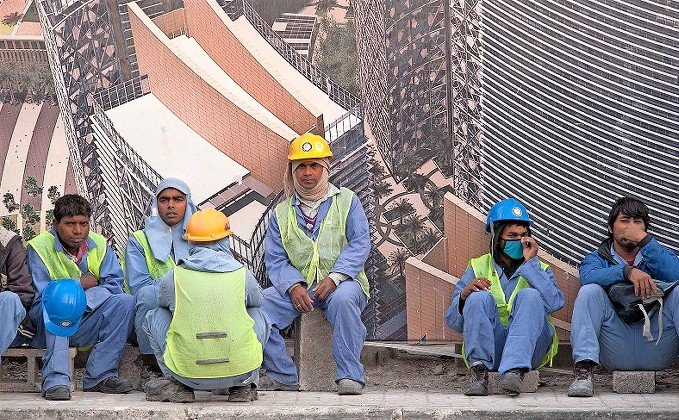 Migrant workers in the West Bay area of Doha, Qatar, waiting for a bus on Feb. 1, 2014.
Alex Sergeev via WikiCommons

When the winning team lifts the trophy after the final on Dec. 18, it will do so over the unmarked graves of more than 6,000 workers who died on the job so that the game could be played.”
By Ben Cohen

There was another significant announcement from an Arab capital last week about relations with Israel when Qatar, the wealthy Gulf nation that provides Hamas with financial and political support, confirmed that Israeli citizens would be permitted to attend the FIFA World Cup taking place there in November and December this year. According to Israeli media, up to 30,000 Israelis have already purchased their match tickets.

The decision to allow visitors with Israeli passports to enter Qatar for the duration of the World Cup reflects the broad trend in the region towards making peace deals with the Jewish state, as demonstrated in the last two years by the United Arab Emirates, Bahrain, Morocco and Sudan. While Qatar has notably not followed the example of these countries, neither has it gone the way of Iraq, whose parliament last month passed legislation that makes any contact with Israelis punishable with a lengthy prison sentence or even the death penalty. By allowing Israeli soccer fans to attend the World Cup, the ruling al-Thani family in Doha is signaling that it might want to develop relations even further once the tournament is over.

The Qatari announcement was positively received in Israel. Foreign Minister Yair Lapid declared on Twitter that the move was a “political achievement the fills the hearts of the fans” while Defense Minister Benny Gantz argued that it would improve the maintenance of “stability in our region.”

Once the tournament is over, though, it remains to be seen whether Qatar will continue to allow Israelis entry or whether it will revert to its established policy by barring them once more. No doubt, the Israeli government — along with the handful of Diaspora Jewish figures who have eagerly traveled on state-sponsored junkets to Doha in recent years, invariably returning empty-handed — will be hoping for the former.

The prospect of Israelis traveling to Qatar (and eventually, every Arab and Muslim country) for business or tourism appears to be more within our grasp now than at any other time since the creation of Israel in 1948. Every milestone in that process is simultaneously a blow to the rejectionist ideology that has prevailed in the Arab world for almost a century and a reminder that Israelis and Arabs, Jews and Muslims, can live and work harmoniously together, despite all the bloodshed and eliminationist rhetoric that has soiled previous decades.

However, as I’ve argued before, “the positive environment of peace can be as censorious of the truth as the negative environment of war.” For it remains the case that some very unpleasant truths about Qatar (and indeed, its neighbors) are in danger of becoming lost in the rush to embrace peace.

All of these countries have woeful records on human rights and free speech. All of them have been built using migrant laborers from African and Asian countries — construction workers, housemaids, cleaners and so forth — who subsist in conditions rightly described as a modern-day form of slavery.

The hotels in Doha where Israeli and other soccer fans will stay, as well as the stadiums where they will view the matches, were all built by workers who entered Qatar under the notorious kafala system that chains them to their employers and condemns them to unsanitary living quarters and lousy pay. The fundamental point is that thousands of these workers have been killed or severely injured while assembling the World Cup stadiums, with little or no compensation for their families back home.

The Qataris have had 12 years to prepare for this year’s World Cup, which was awarded to them by the former FIFA president, Sepp Blatter, in 2010. Blatter was ejected from his post in 2015 and banned for FIFA activities following a corruption scandal that consumed the global soccer authority, much of it related to the machinations and bribes that underpinned the Qatari bid. But Qatar itself has remained immune from the storm that rocked FIFA’s headquarters in Switzerland.

At no point in the intervening decade between Qatar being awarded the tournament and its staging this year was there ever any threat of the 2022 World Cup being hosted by another country. On the contrary, FIFA and its member nations have gone out of their way to indulge the Qataris, including, for the first time in the World Cup’s history, moving the tournament from the summer months to the winter.

Because it is deemed too hot to play soccer during the Qatari summer, domestic soccer leagues around the world are temporarily suspending their competitions so that players selected for their national teams can compete at the World Cup. While it’s a relief to know that highly paid, enviably fit footballers will not be forced to wilt under the burning sun, the same can’t be said for the migrant laborers who will be toiling through the summer months getting everything ready for kick-off on Nov. 21.

FIFA can still claw back some semblance of decency in the months between now and November. The world’s most popular sporting contest will generate some $6 billion. It is not unreasonable to demand that a chunk of those revenues — some human-rights groups have suggested a sum in the region of $500 million — be paid out to the migrant laborers and their families as meaningful compensation for the years of suffering they endured in Qatar.

So, yes, the fact that Israelis will be present at the World Cup (in the stands, at least, as the Israeli national team yet again failed to qualify) is a welcome development. But that is not the only lens through which to view the tournament in Qatar.

When the winning team lifts the distinctive World Cup trophy after the final on Dec. 18, it will do so over the unmarked graves of more than 6,000 workers who died on the job so that the beautiful game could be played. Paying compensation to the victims will make that iconic moment far less bitter.