These photos suggest that Sanad Abu Atlyeh may not have been as innocent as the NGO would have people believe. 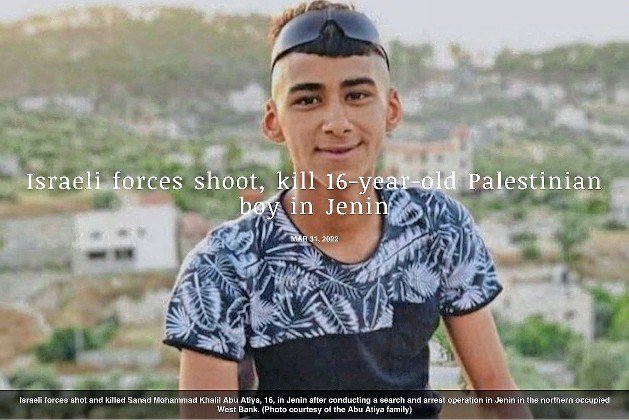 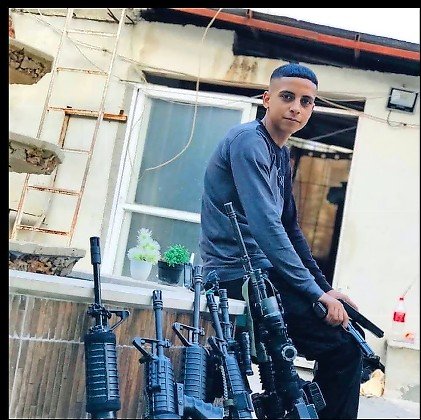 NGOs promote the smiles of fallen Palestinian youth, even those like Nadar Haytham Rayan, 17, whose online profile tells a different tale. 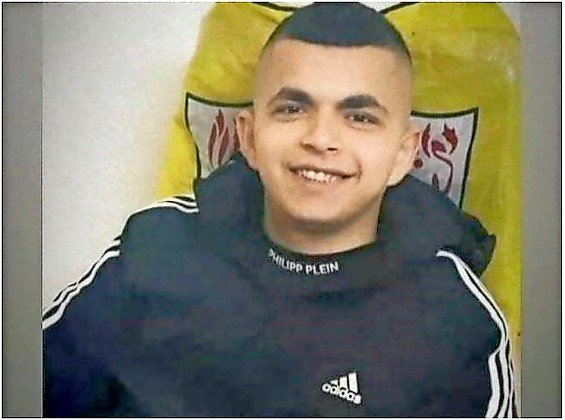 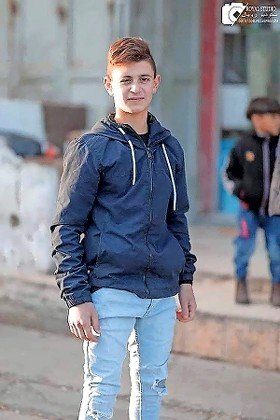 Palestinian NGOs take a hypocritical approach towards children’s rights. On the one hand, they claim to champion those rights and allegations of their abuse feature prominently in NGO campaigns against Israel. But these NGOs ignore the recruitment and use of Palestinian children by terrorist organizations, as well as the indoctrination of children to engage in violence.

Relatedly, Palestinian NGOs deny the very existence of Palestinian terror. They assert that entities which are internationally recognized as terror groups are merely “political parties” and violence against Israelis is a legitimate expression of the “right of resistance.”

As shown in detail in this article, terror-tied Palestinian NGOs — Defense for Children International-Palestine (DCI-P) and the Palestinian Center for Human Rights (PCHR) — regularly distort the circumstances surrounding the deaths of Palestinian minors in terror incidents. They ignore or minimize the violent attacks perpetrated by the minors that precipitated their deaths, and blame Israel for deploying self-defense measures to protect the victims of such attacks.

In situations in which the minors died in clashes with Israeli forces and violent rioting, the NGOs erase this essential element of the incidents. In addition, they make factual claims that conflict with reports from media outlets and official accounts.

Even in the few instances in which NGOs acknowledge the violent actions of Palestinian minors, they often condemn the response of Israeli forces while failing to criticize the terrorist groups that recruit these children and orchestrate the violent clashes in which they take part.

Ultimately, these NGOs seek to use allegations of violating children’s rights in their international campaigns to sanction Israel. In particular, the NGOs provide information to UN reporting mechanisms such as the UNICEF-headed Children and Armed Conflict (CAAC) Working Group. This is an attempt to have the IDF added to a UN blacklist of children’s rights abusers, alongside such terrorist organizations as the Taliban, Islamic State, Al-Qaeda and Boko Haram.

The following examines the circumstances surrounding the deaths of several Palestinian teenagers at the hands of Israeli security forces and the response to their deaths by the NGOs in question.

On March 31, 2022, 17-year-old Sanad Abu Atiyeh was shot dead by IDF forces during a gun battle in Jenin. According to the IDF, Abu Atiyeh was among three Palestinian armed men who fired at Israeli forces.

During his funeral march, Abu Atiyeh was wrapped in a Palestinian Islamic Jihad (PIJ) flag and wore a PIJ headband, a practice reserved for the terror group’s members. Prior to his death, Abu Atiyeh wrote on his Facebook profile, “The living martyr Sanad Abu Al-Saber. The soul shall not know rest until avenging the martyrs of Jenin refugee camp, Jamil Al-Amouri and Abdullah Al-Husari.”

Al-Amouri and Al-Husari were both members of the PIJ’s military wing, the Al-Quds Brigades, who were killed in gunfights with Israeli security forces.

In an official poster, PIJ referred to Abu Atiyeh as “the boy of [Islamic] Jihad,” and named him among other PIJ members. Multiple Arabic-language news sources corroborated that Abu Atiyeh was a PIJ “fighter” and member.

Multiple pictures of Abu Atiyeh carrying military-grade weapons circulated on social media following his death (some appearing on this page).

On March 31,  DCI-P reported, “Palestinian residents reportedly threw stones at the armored Israeli military vehicles as they withdrew from Jenin refugee camp. … An eyewitness reported that gunshots were fired from the refugee camp. … One of the armored Israeli military vehicles drove in reverse pursuing those who were fleeing. … An Israeli soldier exited the passenger side of the jeep. … The soldier shot [terrorist Yazan] al-Saadi … [who] fell to the ground about two meters (six feet) from a car that Sanad and the eyewitness were hiding behind. Sanad was shot as he approached al-Saadi in an attempt to render aid.”

DCI-P did not mention that Abu Atiyeh was one of three gunmen who shot at IDF soldiers, and also ignored his violent background and apparent affiliation to the PIJ.

PCHR noted the IDF report on the incident, but asserted without evidence, “PCHR’s investigations refute these allegations as those who were killed and injured were civilians.”

On March 15, 2022, 17-year-old Nadar Rayan was killed by Israeli forces in Balata. The Israeli Border Police stated that “a group of Palestinians hurled stones and firebombs at them” and that Rayan “opened fire on the officers as they left the camp.”

Israeli sources noted that “during the activity, a motorbike with two terrorists arrived, when one of the terrorists descended the motorbike and fired with a handgun at the Israeli undercover forces, who neutralized him.”

Following his death, Fatah released an official poster eulogizing Rayan and referring to him as “its hero martyr son.” Multiple pictures of Rayan carrying military grade weapons were distributed on social media after his death.

DCI-P claimed, “As Israeli forces withdrew from the camp in a convoy of at least seven armored military vehicles, Nader and another boy passed the military convoy on a motorcycle. … An eyewitness told DCIP that the motorcycle broke down, forcing Nader and the other child to get off the motorcycle. They then attempted to flee the area on foot. … An Israeli soldier fired at least three bullets at Nader and the other boy from inside his armored vehicle.”

PCHR reported, “A motorcycle carrying two children was passing behind the Israeli patrols. … IOF opened fire at the motorcycle, so the two children got off and ran … while IOF continued to open fire at them. After IOF’s withdrawal, a body (sic) of Nader Hitham Fathi Rayan (16) was found.”

According to the IDF, 14-year-old Mohammed Salah was killed on Feb. 22, 2022 by Israeli forces while he and two others threw Molotov cocktails at Israeli motorists near Bethlehem.

Following Salah’s death, the PFLP referred to Salah as “its comrade martyr” and “its comrade son,” adding that “the blood of the martyr that watered the earth of Palestine while defending its Arabness and the honor of its people will not be in vain.”

The terrorist organization also held a memorial event for him and published several official posters of Salah, calling him “its young comrade martyr.”

The NGO made no mention of Salah’s PFLP affiliation.

PCHR reported, “The Israeli Occupation Forces (IOF) killed a Palestinian child in al-Khader village, south of Bethlehem, after excessively and deliberately shooting at him, claiming that the child threw stones and Molotov Cocktails at settlers’ vehicles.” PCHR claimed that “these crimes are done without justification” and made no mention of Salah’s PFLP affiliation.

On February 14, 2022, Palestinians violently clashed with Israeli forces in the village of Silat al-Harithiya, opening fire on IDF personnel and lobbing stones, Molotov cocktails and other improvised explosive devices at them. Seventeen-year-old Fatah member Mohammed Abu Salah was killed by the IDF while participating in these clashes.

Following his death, Fatah’s Al-Aqsa Martyrs Brigades (a US-designated terrorist organization) published an official eulogy poster of Abu Salah, referring to him as “its son, the martyr hero,” who “ascended [to the heavens] … while defending our Arab Palestinian people and land.”

DCI-P stated, “After Israeli forces entered the village, an armed Palestinian man shot at the Israeli military vehicles and managed to flee. … After confrontations between Israeli forces and Palestinian protesters had abated, Mohammad and his 17-year-old cousin arrived at the scene, when Israeli forces suddenly and without warning began firing live ammunition at protesters who began to flee. … An Israeli sniper approximately 250 meters (820 feet) away shot Mohammad. … Mohammad was not participating in any clashes at the time he was shot, an eyewitness told DCIP.”

DCI-P failed to mention Abu Salah’s apparent affiliation with the Al-Aqsa Martyr’s Brigades and denied that he was participating in the violence.

On Feb. 14, 2022, PCHR published a report, according to which, “IOF … surrounded a house belonging to prisoner Mahmoud Ghaleb Jaradat. … A number of young men gathered around houses where the IOF were deployed around, started throwing stones at them. … IOF fired live and rubber bullets, sound bombs and tear gas canisters to disperse the protestors. This resulted in the injury of 7 protesters, including 2 children; one of the children targeted was shot with a live bullet. … The child was identified later as Mohammed Akram ‘Ali Taher Abu Salah (17).” PCHR also neglected to mention Abu Salah’s apparent affiliation with the Al-Aqsa Martyrs Brigades.

On Dec. 6, 2021, 16 year-old Mohammed Mousa rammed a car into Israeli guards stationed at the Te’enim checkpoint near Tulkarm, seriously injuring one. Mousa was shot dead by Israeli forces responding to the attack.

On Dec. 6, 2021, DCI-P reported that Mousa “allegedly committed a car-ramming attack at an Israeli military checkpoint.” DCI-P argued, “If a child is suspected of committing a criminal act, they should be apprehended in accordance with international standards and afforded due process of law,” ignoring the fluid and unpredictable nature of such attacks and the immediate need of forces on the ground to defend themselves and bystanders.

On Nov. 17, 2021, 16-year-old Omar Abu Asab stabbed two Israeli Border Police officers in Jerusalem. Following the attack, Hamas referred to Abu Asab as “its hero martyr son … a unique example of fearlessness and bravery” who died after he committed a “heroic stabbing operation in occupied Jerusalem.”

In response to the incident, DCI-P claimed, “Where individuals allegedly carry out a violent criminal act, they should be apprehended in accordance with international law and afforded due process of law.”