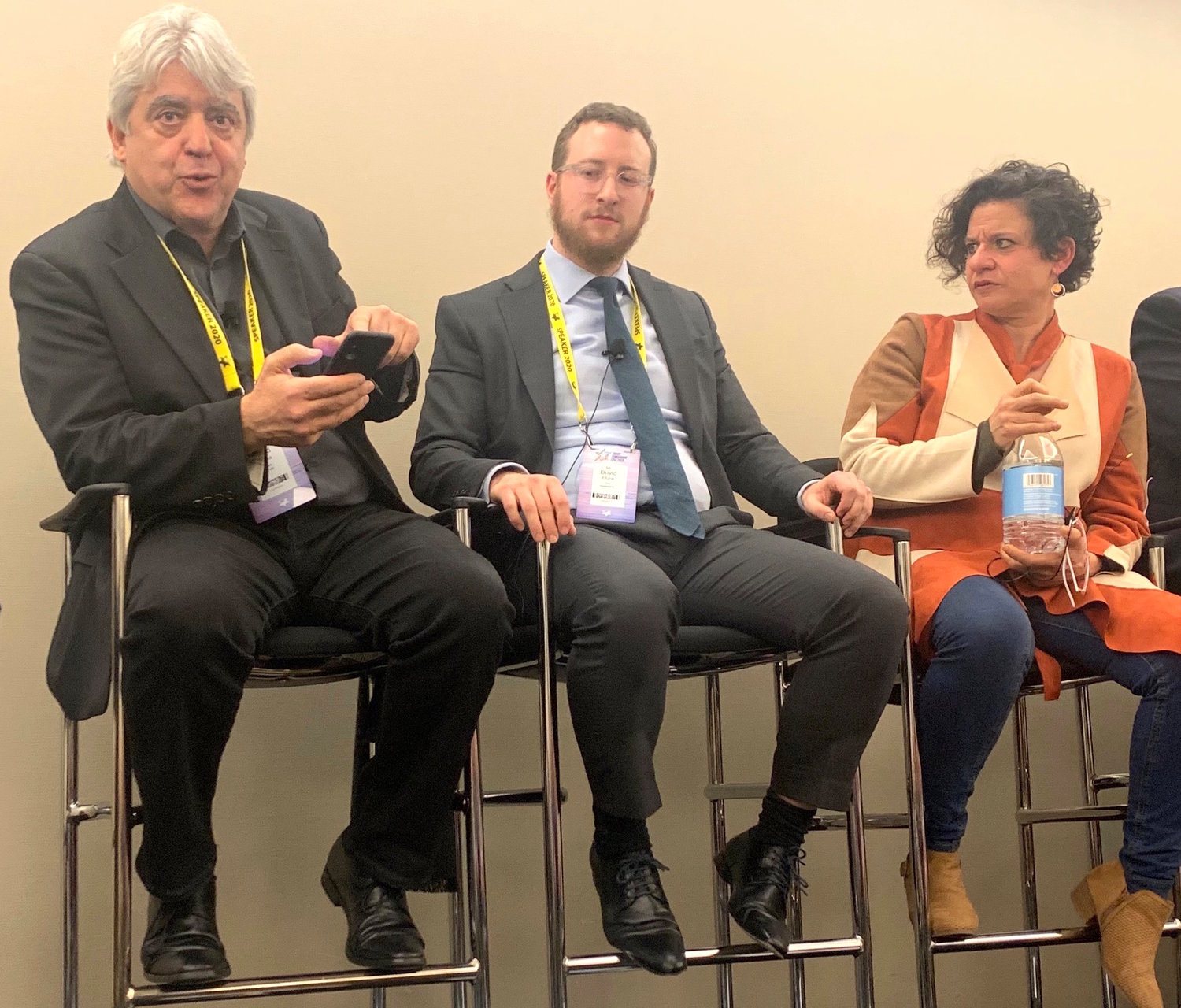 The author, David Suissa (left), participated in a panel at this week's AIPAC Policy Conference in Washington.
The Jewish Star / Ed Weintrob
By David Suissa

It was one of those weeks where every day brought another great idea for a column. First, I attended an insightful lecture by Rabbi Meir Soloveichik that connected the festival of Purim with Abraham Lincoln and slavery.

Then it was “Comeback Joe” Biden’s resounding primary victory in South Carolina that reset the Democratic primary race.

Then it was the AIPAC Policy Conference I attended in Washington, where the drama and anxiety were at a peak.

And, of course, there was how Prime Minister Benjamin “Bibi” Netanyahu pulled off his magic act in the latest Israeli “do-over” election. All great column ideas!

Oh, and did I mention the coronavirus that has dominated the airwaves and alarmed much of the planet? I was thinking of writing about the paradox of viruses, which can both unite and divide. They unite us because they don’t discriminate — a virus doesn’t care whether you’re a Republican or a Democrat, Jewish, Muslim, white, black, left, right, etc. These shared threats remind us of our shared humanity.

But because they’re so contagious, viruses also keep us apart. We’re more reluctant to get close to one another — literally. I saw a sign of that at the AIPAC conference, where many attendees were replacing handshakes and hearty hugs with delicate elbow bumps.

But no virus can slow a political news cycle, and this past week that cycle was more like a tornado. Especially among traditional Democrats, there is growing anxiety, if not panic, that an unrepentant socialist like Bernie Sanders will spell disaster for the party.

No wonder, then, that Biden’s victory the day before the AIPAC conference generated so much buzz.

Could an establishment old-timer rescue the party? Will the support of former rivals Pete Buttigieg and Amy Klobuchar help his chances? Will Mike Bloomberg’s billions make a dent or hurt Biden? (And now, after Super Tuesday, we may have some of theanswers.)

And let’s not forget the Israel factor, which further complicates the picture. If you love Israel, hate Trump and always vote Democratic, a candidate like Sanders who associates with anti-Semites can give you serious migraines. You end up asking: Whom do I dislike less?

Beyond Israel, the real threat many Democrats see in a Sanders candidacy is that his radical leftist views will lead to a blowout in November, keeping Trump in power and undermining congressional races. But it’s not clear that a moderate candidate would fare any better, given the enraged Bernie followers who would take revenge on the Democratic establishment for sabotaging their candidate, as they believe happened in 2016.

In the middle of this political anxiety, on the second day of the conference the buzz shifted temporarily to Israel’s third election in a little over a year. Would the third time be the charm or would Israel be doomed to yet another election? As I write this, Netanyahu is still one or two seats short of a majority. Oh, and he’s about to start a criminal trial on March 17.

Maybe that’s why I was looking forward to writing a Purim column – to give us a break from all this political craziness.

If there’s one Jewish holiday that’s good at giving us a break, it’s certainly Purim, when we’re supposed to be silly and wear costumes. For that one day at least, we can pretend to be someone else.

This notion of being someone else, though, is not so simple. For one thing, it assumes we already know who that “someone” is. Who am I? Am I the news junkie who couldn’t stop schmoozing with the crowds at AIPAC, or the reflective Torah student who savored a brilliant Purim lecture by Rabbi Soloveichik?

And how should I pick my Purim costume this year? By running far away from who I think I am, or by getting closer to who I’d like to be?

Well, since I only have one choice, I think I’ll pick the latter: I’ll pretend to be who I’d like to be. I’ll dress up as a reflective Torah student.

I know, it’s not as cool as dressing up as Bernie or Bibi — but it’s a lot better for my migraines.