'The Haftarah and its Parsha' 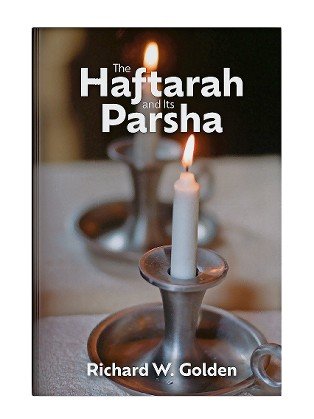 The new book from Mosaica Press, “The Haftarah and its Parsha." 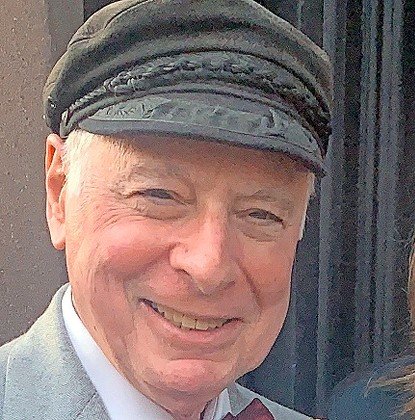 Richard Golden author of the newly released book “The Haftarah and its Parsha.”
Ed Weintrob, The Jewish Star
Previous Next
By Celia Weintrob

When did Jews start reading the haftarah?

If you were asked that question, you might recall a link to the Chanukah story, to a decree by Antiochus that the Torah itself could not be read in public.

But when Richard Golden, author of the newly released book “The Haftarah and its Parsha,” started examining the connection between the weekly Torah portion and its accompanying haftarah, he found little information on the subject.

Despite the haftarah’s antiquity and universality, we know little about its origin or purpose. No record appears to have survived informing us of the names, dates, and locations of the people who established it, and no record of the reasons for pairing particular verses from the books of the prophets with a particular parsha, other than what can be learned from the prophetic verses themselves.

His curiosity grew into a deep dive on the topic, with three years of research resulting in this book, which seeks to identify the relationship between each haftarah and its parsha while exploring how this connection remains pertinent today.

The Mosaica Press book, is available at Jewish bookstores and from Amazon.

Golden, a retired attorney, is Shabbos gabbai and a past president of Congregation B’nai Avraham, the Orthodox synagogue in Brooklyn Heights.

The Jewish Star spoke this week with Golden about “The Haftarah and its Parsha.”

Jewish Star: Why did you decide to write this book?

Richard Golden: As I’d read the parsha and haftarah each week, the question occurred to me, why is this particular haftarah associated with this particular parsha? There might be three or four important things mentioned in the parsha — why did the haftarah choose to refer to only one and not the others? Or even if you were looking at that one, why were these particular verses, from these books, deemed most appropriate? I looked for answers but I couldn’t find anything that was written on the subject. So I started researching it myself.

How long have you been working on this book?

I started having these questions several years ago. I reviewed commentaries on both the parsha and the haftarah verses. I was just satisfying my own curiosity, figuring out the answers for myself. It took two or three years before I felt I had the information I wanted. What finally enabled me to write the book was the COVID lockdown. I wasn’t out of the house for about a year which gave me the opportunity to look at what I’d written earlier and put it together.

What sources did you comb through to do this research?

Sometimes I quote the Babylonian Talmud, which is here in my library, and Rashi is readily available too. But many others are not. When I needed to, I would study with a partner to go over the material that I did not have easily accessible myself.

Why did you feel it was necessary to go outside the Jewish world for some of this information?

There is only one reference that I made to a non-Jewish source, and that was to the Christian Bible. My understanding is, what is stated in those books, from a historical point of view, is accepted as statements of fact — to be checked against other known facts, as every statement regarding events that happened a long time ago should be.

It’s stated in the Christian Bible that on Saturday morning in a congregation, after the recitation of the reading from the law there was a reading from the prophets. That is noted in a couple of different places, both in Palestine and in the diaspora. It’s an important way of knowing that reciting the haftarah was already accepted practice before the Hadriatic (Roman) persecutions, before 70 CE, which is a period these sources were talking about. I looked at those sources in the context of trying to establish when it became standard to read the Haftarah in synagogues on Saturday morning.

What is the commonly held belief as to when reading the haftarah began on a regular basis?

There is a belief by many Jewish commentators that the haftarah started as a response to the decree of the Syrian Greek ruler Antiochus, that the Torah could not be read in public, which at that time was already part of the Saturday service. And the penalty was pretty severe, it could be execution. The response to that, according to this theory, was that Jews on Saturday morning would read a portion of the prophetic books that would be reminiscent of the portion they would have read that day from the Torah. That’s perfectly plausible, but there’s no support for it in any contemporary records.

And then the question arises: When the persecution ended, which was only enforced for roughly three years, why did that practice continue when it wasn’t necessary anymore? If the haftarah readings started during that period, it should have ended when the persecution ended. It may have started again, later, for other, unknown, reasons.

My introduction discusses the period between the Greek and Roman persecutions, ideas about why reciting the haftarah became standard. Again, there’s no authoritative statement that says: today we started reading the haftarah, this is why we did it, and we expect this to be adopted all over the Jewish world. There’s nothing like that at all. We have to rely on whatever the record shows us or whatever commentaries were written afterwards.

What was the most surprising thing that you discovered while writing this book?

I find the haftarahs often address practical problems that are mentioned in the Torah. Like relations between husband and wife, for instance, and how to preserve that relationship. When that is a subject in the Torah, there is an incident related in the haftarah, reinforcing what the Torah says. Or when it comes time to replace leadership among the Jews, when Moses is about to die, how the Jewish people went about picking a new leader to succeed him. And the haftarah addresses similar circumstances. You realize what should happen when there’s a change in leadership from one generation to the next among the Jewish people. That struck me very forcibly.

Another thing was this: the things the haftarah spoke about back then resonate with us today. We still have the same reactions emotionally to the types of problems mentioned in the haftarah and the parsha.

What occurs to me from all of this is that human nature has remained constant for thousands of years, even though we have enormously different physical environments. For this interview, you and I are talking in different locations far away from each other, in real time. The expression “in real time” would not have been understandable to people who lived 2,000 years ago.

Do you have a favorite haftarah, now that you know them all intimately?

It depends on what’s happening in my life at the time. This is what’s wonderful about rereading the parsha and haftarah every week. Something you have read 30 times already, when you read it 31st time, you see something that you hadn’t noticed before, or a relationship that you hadn’t seen before. That’s because of what has happened in your life in the previous year since the last time you read it.

The same thing with the haftarah. I could say, right now, this is my favorite haftarah. Ask me the same question next year, it will be something different.

“The Haftarah and its Parsha” (216 pages, $19.99) is available at Jewish bookstores, from Amazon, and directly from Mosaica Press via www.haftarahparsha.com

Learning to love each other when we disagree

From its opening parsha, Torah tells us a story

The Exodus and Sodom: Similarities, differences

As we wrap our tefilin, we bind with our G-d