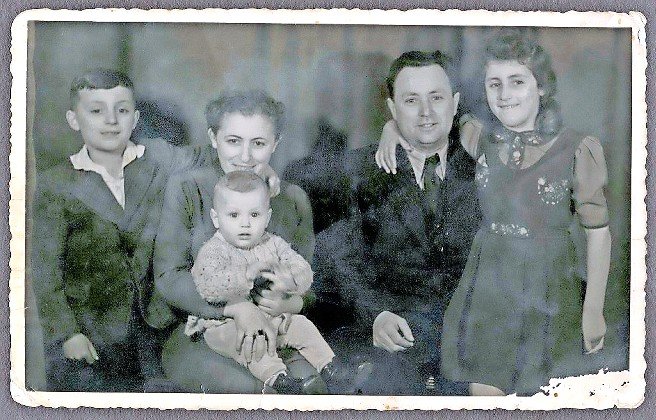 Susi Hilsenrath, now Susan Hilsenrath Warsinger (on far right, with her brother, Joseph, on the far left), was taken by a stranger to France, not knowing if she’d ever see her parents again. She doesn’t remember saying goodbye.
US Holocaust Memorial Museum

Shmiel Jaeger in 1934 with his family in Bolechow, Poland. Later, he wrote to family in America: “When you go out into the street or drive on the road, you’re barely 10 percent sure that you’ll come back with a whole head or your legs in one piece.”
Previous Next
By Alan Zeitlin, JNS

Ken Burns can’t recall ever learning about the Holocaust in school.

America’s most decorated documentarian, who boasts epic films like “Baseball,” “The Civil War,” “Jazz” and “The Roosevelts,” was asked by the United States Holocaust Memorial Museum if he might make a documentary on the Holocaust. He decided to do so. Directed by Burns, Lynn Novick and Sarah Botstein, “The U.S. and the Holocaust” is easily one of the best documentaries of the year. Chock full of fascinating facts, the film is both brilliant and balanced.

Burns remembers his father showing him a famed 1961 dramatic film about the trials of Nazis beginning in 1945 that included real footage.

“He made me watch ‘Judgment at Nuremberg’,” Burns told JNS. “The prosecutors pull down the shades and project the worst of the worst. He just asked me to look at it and understand what happened. … My father’s insistence was a searing memory. They did not hold back in the footage. There’s bulldozers, bodies and skeletons.”

Burns and Novick directed the 2007 documentary series “The War,” which had elements of the Holocaust. Burns said he was then approached by people with disinformation and conspiracy theories. That was partly a catalyst for making this film.

Answers to some big questions are juxtaposed with stories of Jews of the time, who were saved or slaughtered.

The moment where I cried the hardest was when actor Liam Neeson voiced Shmiel Jaeger, a man who moved to Delancey Street in Manhattan, found it to be unsatisfactory and returned to Poland. Years later, married with several children, his letter to his family in America asked for help to get him out of “this Gehenom” (Hell). In an earlier part of the film, he says in a letter to family members describing his plight, “when you go out into the street or drive on the road, you’re barely 10% sure that you’ll come back with a whole head or your legs in one piece.”

Did Burns cry or have big emotional reactions while making the film?

“It was seven years of a labor of love but also heartbreak. How could it not be? Sometimes, it was little, tiny moments. There was a journalist from Chicago named Edgar Mowrer. He understood what was going on in 1933. I don’t think he was anticipating the plan for the complete extermination of the Jews. But he was escorted out of the country by the Nazis, and while his minder was taking him to the train station, he asked him if he thought he’d ever come back to Germany, and he said, ‘with 2 million of my countrymen.’ I just burst into tears.”

Dorothy Thompson interviewed Adolf Hitler before he came to power for Cosmopolitan magazine and called him a little insecure man, but she read Mein Kampf. She let the world know that “not only are the reports about the atrocities unexaggerated, [but] they are underrated.” She wrote for The Jewish Daily Bulletin in New York, even though she was not Jewish, and this angered Hitler, who ordered her out of the country when she went to Germany.

We hear her say that “civilized people” didn’t believe Hitler would act in his anti-Semitism and warned that “Germany has gone to war already and the rest of the world does not believe it.”

As to the argument of why Roosevelt did not do more, we learn there was a real fear that if he pushed for more immigration of Jews, Congress might act to limit immigration or stop it altogether. The Hitler propaganda machine called him “Frank D. Rosenfeld” and the New Deal was called the “Jew Deal” with the anti-Semitic trope that the Jews were pulling his strings. We learn that Rabbi Stephen Wise met with Roosevelt and did his best to help Jews looking to come to America, as did several organizations, including the Hebrew Immigrant Aid Society.

Burns said for dozens of years, people have asked him why American planes did not bomb the train tracks leading to the death camps. Some wonder why they didn’t bomb the camps as well. The film shows it was a complex issue. The Nazis could have likely rebuilt the tracks fairly quickly. In terms of morality, who is to say one would have the right to bomb the camps and kill Jews in that act, in order to save others? And what if American pilots were shot down trying to save Jews? What would have been the American reaction?

The documentary includes a mention from Holocaust survivor and Nobel Prize laureate Elie Wiesel saying it would have been worth it.

Historian and current US State Department anti-Semitism envoy Deborah Lipstadt appears several times. On this question, she says even if it would not have stopped the murder of Jews in the death camps, it would have been worth it to make a statement. But what would have been the optics of Americans killing Jewish in death camps even if the intentions were good? Also, there weren’t precision bombs, and a one-off target bomb actually did land in a death camp.

“It’s a ‘lose-lose’ situation in a way,” Burns said of the difficult question. “People die.”

Burns said he had no idea when he started the documentary in 2015 that a few years later, the Tree of Life synagogue mass shooting in Pittsburgh would take place, followed six months later by the one in Poway, Calif., and then, in 2021, Jews would be beaten up in the street in broad daylight in New York and Los Angeles. He said due to his insistence, the film was released a year earlier than scheduled because it was needed to “enter the conversation.”

Lipstadt also notes that “the time to stop a genocide is before it happens.”

Botstein, whose father Leon is the president of Bard College, said family members on her father’s side were wiped out during the Holocaust. She said she wanted to show the emotional aspects of the figures, the difficult questions and how many situations were nuanced.

“The biggest challenge was trying to really thoughtfully interweave the events of the actual persecution of the Jews of Europe and the Holocaust with the question of what Americans, knew and when, and what they thought about it,” said Botstein. “Also, we wanted to show how America succeeded and how it failed.”

A measure of success came from bringing about 225,000 Jews to US shores — more than any other sovereign nation, and defeating Hitler in war with Russia and England to end the Holocaust.

A measure of significant failure came from not saving the lives of many when there was plenty of living space. Also stymying help for European Jews was the Johnson-Reed Act of 1924 stifled immigration, as it required visas, had difficult paperwork and would wind up being a barrier to saving lives.

The refusal to accept the St. Louis, a ship with 937 passengers, most of whom were Jewish, was a disturbing development.  The ship left from Hamburg and was set for Cuba until an anti-Semitic sentiment caused the Cuban government to have a change of heart. This gave the Nazis the opportunity to say they were honest in not wanting Jews, while democracies claimed to want them but really didn’t.

Novick, who interviewed a number of survivors in their 80s or 90s about their childhood experiences for the film, said she was especially moved by the story of Susan Hilsenrath Warsinger.

“The thing that really killed me was hearing what it was like when her parents made the decision that she and her younger brother would be taken to France,” said Novick. “This stranger came and took them, and she said in describing it that she doesn’t remember saying goodbye to her parents. As a mother, I thought about what it might be from the perspective of a child to be her in that moment and imagined what it might be like for a parent to do that, not knowing if they’re ever going to see their children again.”

While many know the story of Anne Frank, few know her father, Otto, had made significant efforts to get his family to safety. He was the only one to survive.

Nobody immune from persecution

Reports of murders of Jews were seen in newspapers; they were not often on the front page.

As for American villains, Breckinridge Long was an assistant secretary in the US State Department who implemented policies to slow immigration, and in 1944 would be removed from his position overseeing the Visa Division after he either misrepresented facts or lied.

On the radio, Father Charles Coughlin would spew anti-Semitism and scapegoat Jews. His program, heard by millions, was canceled in 1939. Madison Grant, voiced by Paul Giamatti, warned that taking in refugees would threaten America’s security and racial purity, saying that the Nordic race was superior. Sadly, no major movie studios took on the Nazis until Warner Bros. did so with “Confessions of a Nazi Spy” in 1939, starring Edward G. Robinson.

We learn that the Nazis, criticized for the treatment of Jews and the Nuremberg Laws, turned and pointed out the ill-treatment of blacks in America and laws that were unfair to them. It is claimed that Hitler may have believed that America would even tolerate the murder of Jews because of America’s treatment of Native Americans.

Of the characters we follow, a notable one is Guy Stern, who recalled Brownshirts, or Stormtroopers, beating up his father.

“It is a deep engrained feeling that your parents are your protectors,” Stern says in the film. “Now, there is no protector. Nobody is immune from persecution.”

As a teenager, he was sent to America and tried to raise $5,000 to save them. While he loved dancing with girls, baseball and listening to jazz, the responsibility weighed on him.

As for heroes, one was John Pehle, executive director of the War Refugee Board ran a secret US government program that saved tens of thousands of Jews. US Secretary of State Henry Morgenthau Jr. was careful not to seem to ask for special treatment for Jews, as he was Jewish, but when he found that the State Department suppressed reports illuminating the extermination of Jews, he was outraged at how they obstructed, lied and got in the way of sending funds that could have helped Jews.

Historian Peter Hayes says in the film that while we like to think of America as welcoming, shutting people out is “as American as apple pie.”

Stern says at the end of the film that if people can learn from the Holocaust, “perhaps we have on shield against its recurrence.”

Asked if he thought there could be another Holocaust, Burns would not comment but did say that he is concerned about what he sees.

“I’m worried about the increase in anti-Semitism,” he acknowledged. “G-d forbid, we would ever approach anything like that.”