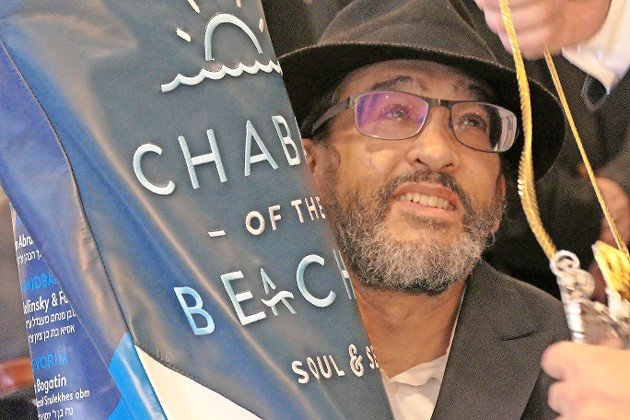 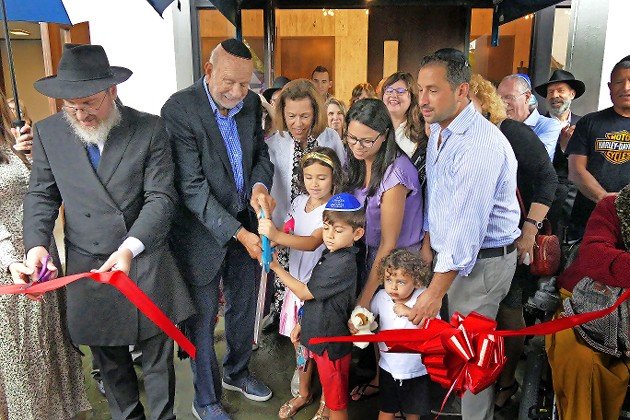 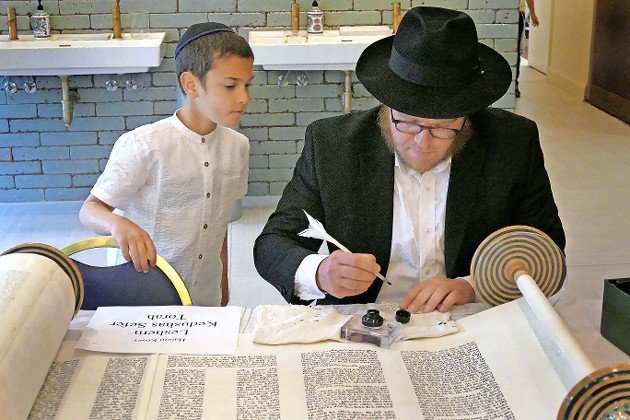 Moshe Goodman watches as finishing touches are applied to the Torah by Rabbi Chilik Weinfeld.
Joe Abate for The Jewish Star 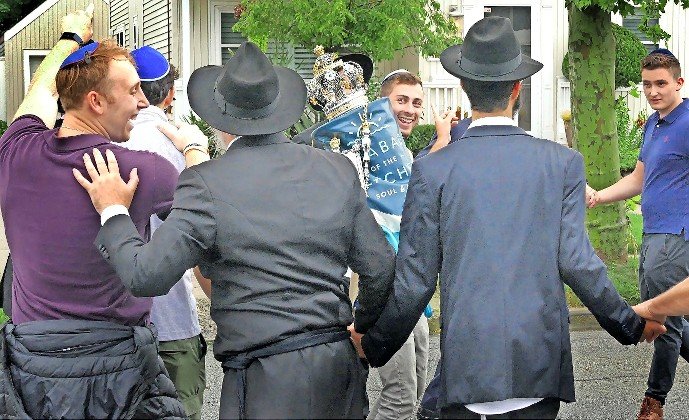 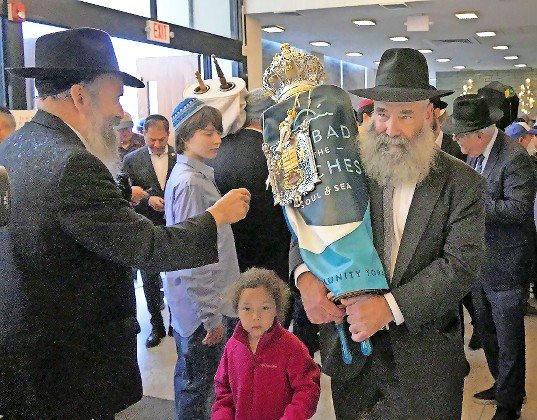 Dr. Doniel Buff, chairman of the Beaches Community Torah Initiative, carries the scroll into the synagogue for the first time.
Joe Abate for The Jewish Star 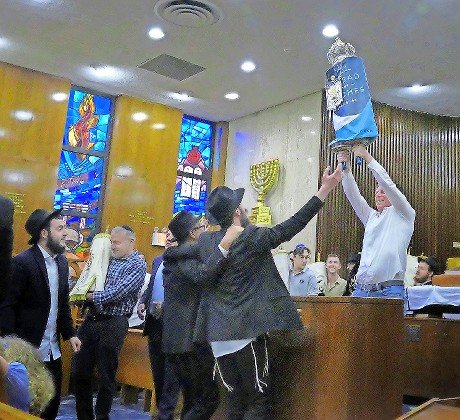 In the santuary, Philip Osrove lifts the Torah high into the air.
Joe Abate for The Jewish Star
Previous Next
By James Bernstein, Edior, Long Beach Herald

On a warm afternoon last August, Rabbi Eli Goodman of Chabad of the Beaches walked into his shul and was stunned to see that the Ark had been vandalized, and two Torahs and other religious items were missing. He immediately called the Long Beach police.

In the days that followed, Rabbi Goodman’s face was heavy with strain as he described his shock and feeling of loss for his synagogue and the rattled Long Beach community.

But on Sunday, the strain was replaced by a wide smile as Rabbi Goodman dedicated a new Torah to replace one of those stolen. The celebration, attended by over 100 people, also featured a ribbon-cutting to dedicate the new Norm and Elaine Brodsky Center for Jewish Life.

“This is like a wedding,” Rabbi Goodman told the gathering, explaining that the day marked the marriage of the new Torah and the congregation. “Every drop of ink (in the Torah) comes from the effort of everyone here.”

Some rain delayed plans to march through the streets with the new Torah. But Rabbi Goodman was quick to add that rain on a wedding day “brings good luck.”

It was a joyous day at the synagogue, on West Walnut Street in Long Beach, with members of the congregation taking turns participating with a scribe as he inked in the scroll’s final letters.

A Torah has 304,805 letters and each one must be written precisely for the scroll to be kosher. The high-stakes work, undertaken by a religiously observant Jew, costs between $50,000 and $60,000 and takes about a year. One-hundred-thirty Chabad of the Beaches congregants contributed to pay for the new Torah; some donated a few dollars and others thousands, Rabbi Goodman said.

A second Torah, funded by Norm and Elaine Brodsky, has been commissioned and will be completed in about a year, he said.

Yechiel Winfeld, an assistant rabbi at the synagogue, sat before the new torah and helped members of the congregation fill in some of the final letters. The scribe for this torah was Chaim Gourarie. Rabbi Goodman said it was the first torah Gourarie has written.

“There are very particular (religious) laws about how this has to be done,” Rabbi Winfeld said, referring to the writing of the characters. “It’s not [done] every day.”

On a table before him sat the new Torah, a yad used for pointing at letters when the scroll is read, and a crown and jewelry used as Torah decorations — all items stolen last summer but now newly replaced.

Phase one including construciton of the lobby and meeting area where Sunday’s celebration was held. A second phase is to include a multi-purpose space, a library and classrooms.

Music played throughout the morning as one congregant after another got the opportunity to participate in the writing of a letter in the Torah.

If the dark day last August was on anyone’s mind, it came second to the present and the future.

“For a lot of people, this is a very emotional day,” said Rabbi Winfeld. The day of the break-in, he said, “is in our memory. But as a people, we have been through so much. We’re not looking back. My grandparents are Holocaust survivors, but I never saw them not smiling. Our action now is going forward.”

The break-in took place Aug. 27, two weeks before Rosh Hashana. The vandalism sparked a speedy investigation by Long Beach Police and an exhaustive search by synagogue members who were joined by local residents who scoured the waters and the beach.

A few days after the break-in, a 23-year-old man was arrested and charged with burglary. Some residents told police they had seen a man in the ocean wearing some of the religious jewelry. Police said the suspect was homeless. He pled guilty and was sentenced to five months probation and ordered to stay away from the Chabad synagogue. No motive for the crime was established.

“Today is all about the future,” said Rabbi Goodman. “It’s about our ideals, which are kindness, decency and goodness.”

When the rain let up, Rabbi Goodman led a group of marchers along West Walnut Street to the boardwalk and back to the synagogue, singing as they walked.