Jews (not the Shoah, not the UN) created Israel 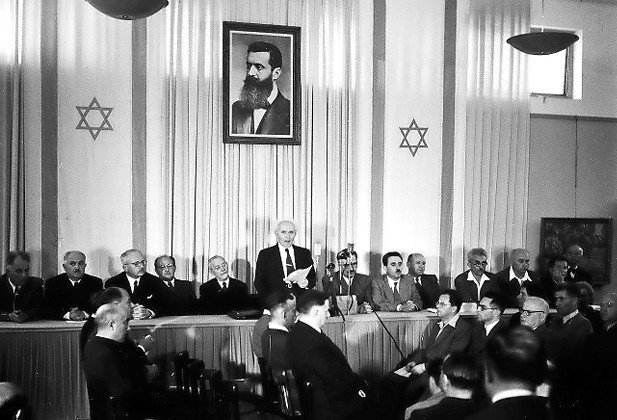 Four facts put the lie to the tidy narrative that the creation of Israel was a result of European guilt.”
By Ken Cohen, FLAME

In the course of a few days in January 1942 — 80 years ago — Hitler’s henchmen, including SS chieftain Reinhard Heydrich, Adolf Eichmann and other top members of the Third Reich, conferred at a villa in Wannsee, Germany to engineer the “Final Solution” to the “Jewish problem.”

The notorious Wannsee Conference succeeded in creating an efficient, industrial-scale approach to the Holocaust. Its extensive chain of death camps and gas chambers accomplished ultimately — unimaginably — the murder of 6 million Jews

But this horror neither prevented the birth of the Jewish state nor did it — contrary to the narrative of many Israel haters — provide an excuse for Israel’s formation.

Ironically, many of those who oppose the State of Israel today blame its existence on the success of the murderous plans drawn up at Wannsee. Israel’s enemies minimize the righteousness of its birth in 1948 by attributing the Zionists’ achievement to global sympathy over the loss of Europe’s Jews, as if the most devastating genocide in world history would not justify the formation of the first Jewish state.

This objection to Israel conjures up the image of the United Nations and a few Western nations imposing a Jewish nation on native Arabs living in Palestine. This version has Israel created in a fit of guilt by the world’s nations because they stood by as the Holocaust unfolded. Israel is, according to the myth, a guilt-offering to compensate for the world’s indifference to the slaughter.

Indeed, one of the most pernicious lies about Israel’s creation is that it was born due to the Holocaust, a result of the United Nations Partition Plan of 1947. The truth is, Israel was created by the Jews themselves as a result of more than a half-century of organizing.

As Israel’s Prime Minister Naftali Bennett recently said, reflecting on Wannsee’s significance: “The State of Israel isn’t ours ‘thanks to’ the Holocaust but because the Land of Israel was, is and will always remain the home of the Jewish people.”

The myth continues that Holocaust guilt reached a pinnacle on Nov. 29, 1947, when the UN General Assembly voted to partition the British Mandate for Palestine into Jewish and Arab lands. Thus, the narrative insists, Europe soothed its torment over the Jews at the expense of Arabs.

1) Jews are the indigenous people of Palestine, preceding Arab arrival by some two millennia and having maintained a continuous presence and several periods of sovereignty in this land over some 3,000 years, since the Kingdom of David in 1,000 BCE.

2) The Arabs, who did not define themselves as Palestinians until 1964, have never had sovereignty — or even control — over Palestine.

3) The formation of the State of Israel in Palestine was preceded by determined Zionists and Zionist organizing that began officially in 1897 with the first Zionist Congress — 45 years before the shame of Wannsee.

4) A distinct ambivalence — and even outright opposition — towards a Jewish state in Palestine predominated in many nations, including Great Britain and the United States.

While Great Britain deserves credit for the 1917 Balfour Declaration, it quickly worked to undo its effects, violating its League of Nations-granted mandate by carving out two-thirds of the land for what became Jordan. Then, it promulgated the infamous 1939 Palestine White Paper which virtually eliminated Jewish immigration to Palestine.

Issued just months before Hitler’s war was launched, the White Paper cut off European Jewry from the only place in the world to which they could flee. Other countries wouldn’t shelter them — much less welcome them. In the ensuing world war, the Jews were trapped in a continental slaughterhouse, which the Wannsee Conference had made far more efficient.

After Germany’s defeat, the Allies created the United Nations, which did nothing to help Jewish survivors to reach Palestine from their squalid refugee camps in Europe. There was no call to Britain to lift the White Paper’s limits on immigration to Palestine, where a civil war erupted between Jews and Arabs — with each also attacking the British.

Britain, exhausted by World War II, announced in early 1947 that it was relinquishing its UN Mandate for Palestine. Thus, the 1947 UN vote to partition Palestine was just an empty gesture: The only thing clear was that some kind of division of Palestine was certain once the British withdrew.

Most agreed that declaring a Jewish state would create yet another bloodbath for the Jews, who were then a distinct minority in greater Palestine, and were vastly outnumbered by the surrounding Arab nations, all of whom pledged the eradication of the Zionist presence.

Caring more about relations with Arab nations than the survivors of the Holocaust, the Allies all imposed arms embargoes against the Jews of Palestine. The partition plan did nothing to protect a Jewish state in Palestine, and those who ratified it cared not a whit about the survival of the Jewish community.

The State of Israel was declared on May 14, 1948, moments after the last British troops left. The UN resolution hadn’t called for Jewish statehood, and many foreign politicians thought it was unwise, including the American Secretary of State, George Marshall.

The European powers, the United States and the United Nations prepared to watch a continuation of the Holocaust as Israel was swarmed by Arab armies.

Israel survived — and has flourishedv— because of the incredible commitment, leadership and courage of its own population (then just a few hundred thousand), facing millions of Arabs and five invading armies.

In fact, there was no inevitability of Israel resulting from the Wannsee Conference in 1942. And no toothless UN General Assembly Resolution birthed Israel in 1947.

The courageous leaders and people of Israel created — and fought at a huge cost of blood and treasure to create — the State of Israel in 1948.

On Tisha B’Av, facing a new siege of Jerusalem

Conduct fitting the honor of the Jewish people