It’s time to stop lying to ourselves about Qatar 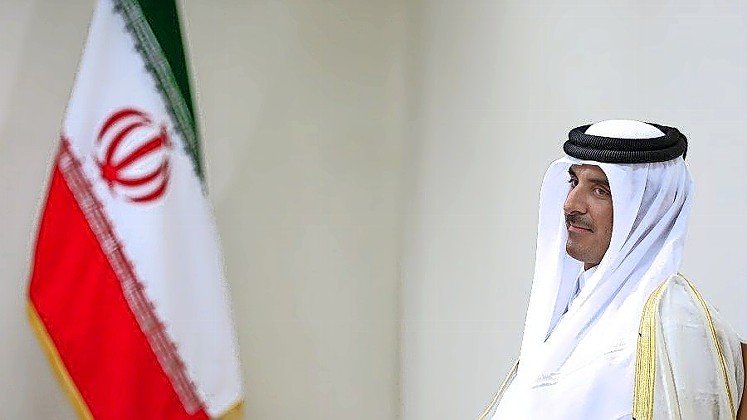 On the one hand, Doha plays a pivotal role in waging the global jihad against the United States and the free world. On the other hand, it showers them with gifts.”

Al Jazeera, controlled by Qatar, has been the home network for Al Qaeda both before and after the Sept. 11 attacks, for Hamas, for Islamic State and other Muslim Brotherhood-aligned terror groups. Without Al Jazeera, the forces of jihad and Islamic terrorism would never have risen as they have over the past 25 years.”
By Caroline Glick

The news that President Joe Biden has decided not to remove Iran’s Islamic Revolutionary Guard Corps from the State Department’s list of foreign terrorist organizations shouldn’t have come as a very big surprise. A majority of senators oppose removing the largest and most lethal terror group in the world from the list. And if Biden had caved in to Iran’s demand to remove it, he would have endangered the 2015 nuclear deal, which as far as Biden and his advisers are concerned is the be all and end all of their Middle East policy.

What Iran will receive to make up for the IRGC staying on the list is still unclear. But two things are clear. First, the administration is completely committed to the 2015 nuclear deal. This position, which is not subject to change, is indefensible on its face, and not merely because the deal guarantees that the largest state sponsor of terrorism will have a nuclear arsenal in eight years at the very latest. And it is indefensible not merely because the deal gives the UN Security Council’s stamp of legitimacy to an illicit nuclear weapons program developed by a UN member state that is pledged to annihilate another UN member nation.

The Biden administration’s unyielding commitment to the 2015 nuclear deal is indefensible because it is irrelevant. It has been overtaken by events.

According to Israeli Defense Minister Benny Gantz, Iran has already stockpiled a sufficient quantity of uranium to produce a nuclear weapon. Last week, the Wall Street Journal reported that the Iranian regime systematically lied to UN nuclear inspectors about all aspects of its nuclear program. The Journal‘s report made clear — and not for the first time — that Iran’s commitments to limit its nuclear operations are worth less than the paper they are written on.

If we know that Iran already has sufficient quantities of uranium to build a bomb, and we know that Iran went to extraordinary pains to hide the breadth of their program from UN inspectors, then we can assume that Iran has larger stockpiles of enriched uranium than we are aware of. Moreover, we can rest assured that no agreement that requires Iran to scale back its nuclear capabilities or activities can serve as a credible non-proliferation deal, because Iran has no credibility.

The 2015 deal is also irrelevant because although the economic benefits Iran would gain from the abrogation of US economic sanctions are significant, Iran is already doing very well financially. This is true, first and foremost, because the Biden administration isn’t enforcing key components of the sanctions regime.

Thanks to unsanctioned energy exports to China, Iran’s oil and gas exports have already reached their pre-sanctions level from 2018. So too, the embargo the United States placed on Russian oil and gas, coupled with the United States’ reduced oil production, has caused energy prices to skyrocket, netting Iran record profits. Given this state of play, it is far from clear why Iran would have any burning interest in returning to the 2015 deal.

All the same, if the United States is able to entice Iran to accept the cancellation of US sanctions in exchange for empty Iranian promises to curtail limited aspects of its nuclear operations, the credit for that dubious US “achievement” will go to Qatar.

Over the past few weeks, in everything related to the 2015 deal, the spotlight has been on Qatari Emir Tamim bin Hamad Al Thani.

Al Thani returned from a state visit in Tehran recently full of tales that he had clinched an agreement with the ayatollahs that paves Iran’s return to the nuclear agreement.

In March, Al Thani enjoyed a spectacular visit to the White House. Immediately after he met with Biden, the administration designated Qatar a major non-NATO ally — a valued distinction that Israel, for instance, carries. The weird thing about Qatar though is that unlike Israel, Qatar isn’t a US ally. Qatar is Iran’s ally. Qatar is the world headquarters of the Muslim Brotherhood.

But then again, the Qatari regime is awfully generous and friendly to America.

There is a great deal of confusion about Qatar and where it stands in relation to the forces of jihad in the world. To dispel the confusion, we need to go back in time to 1996. That year, the Qatari regime undertook two major initiatives. It founded the Al Jazeera satellite television network and opened Al Udeid Air Base, which it gave to the US Air Force to use as its Central Command, responsible for directing all US air operations in the Middle East and South Asia.

Since its inception, Al Jazeera has served as the most powerful mouthpiece in history for the Muslim Brotherhood and its message of global jihad. The network served as the home network for Al Qaeda both before and after the Sept. 11 attacks, for Hamas, for Islamic State and other Muslim Brotherhood-aligned terror groups. It has also served as an apologist for Iran by, among other things, not covering the mass anti-regime protests inside Iran.

Without Al Jazeera, the forces of jihad and Islamic terrorism would never have risen as they have over the past 25 years.

Al Jazeera isn’t an independent actor. It is controlled by the Qatari regime, whose Islamic and foreign policies are identical to Al Jazeera‘s editorial line. Among other things, Qatar is Hamas’s international headquarters and largest financier. Qatar was the Taliban leadership’s operations base during their 20-year war against America. Qatar sheltered Al Qaeda terrorists and financiers before and after 9/11.

Qatar’s decision to found Al Jazeera was a natural move for the emirate. As David Reaboi, author of “Qatar’s Shadow War: The Islamist Emirate and its Information Operations in the United States,” explains, “The relationship between the Brotherhood and Qatar goes back to the 1960s, when the tiny emirate brought Egyptian chief Muslim Brotherhood jurist Yusuf al-Qaradawi to Doha [after then Egyptian president Gamal Abdel Nasser expelled him from Egypt] in order to create a massive program for Islamic education that would come to serve as state ideology.”

As soon as Al Jazeera was founded, Qaradawi received top billing on the network to propagate his jihadist message to the entire Arabic-speaking world. For decades, his “Life and Islamic Law” program was watched by tens of millions of Muslims worldwide. There he propagated the doctrine of jihad, and indoctrinated his viewers to hate Jews and support the cause of their annihilation.

Reaboi adds, “Because of the Qatari state’s intimate relationship and ideological connection with the Brotherhood, it has become very difficult to see where one ends and the other begins.”

In other words, at its core, and from almost the outset of its independence, Qatar is a terror-sponsoring and terror-financing jihadist emirate.

This brings us to Al Udeid Air Force Base. While disseminating the message of global jihad and supporting terror groups worldwide, as well as Iran, the Qataris also made themselves indispensable to the Americans. They built the Americans a state-of-the-art base at their own expense, at a time of heightened tensions between Saudi Arabia and the United States. The Americans were happy to receive the gift. And plenty of other valuable presents followed: to the US armed forces, to the private sector and to American elites in all walks of life.

And so began Qatar’s double game.

On the one hand, Doha plays a pivotal role in waging the global jihad against the United States and the free world. On the other hand, it showers them with gifts. Qatar opened campuses for US universities and think tanks in Doha. It opened factories that hire thousands of American workers in key states. It regularly invites influential communal and thought leaders on all-expenses paid luxury tours of Doha. It spends millions on lobbyists in Washington.

During the George W. Bush administration, the US’s dependence on Al Udeid base saved the regime from criticism and sanction after the 9/11 attacks and during the wars in Iraq and Afghanistan. During the Obama administration, ties reached new heights as Barack Obama and his advisers worked to realign the United States towards the Muslim Brotherhood and Iran and away from its traditional allies, Israel, Egypt and Saudi Arabia.

The Trump administration had a golden opportunity to cut ties with Qatar. In 2017, Saudi Arabia, Egypt, the United Arab Emirates and Bahrain cut ties with Qatar and blocked all air and land traffic to the emirate due to its alliance with Iran and the Muslim Brotherhood, which both pose existential threats to those countries. Rather than side with its allies, the Trump administration first sat on the fence and later mediated “peace” between the sides. The Biden administration, which is restoring the Obama administration’s sought-for realignment towards Iran and the Muslim Brotherhood, is also expanding US-Qatari ties.

This brings us to Israel. This month, Al Jazeera used the death of its journalist Shireen Abu Akleh in Jenin during a firefight between Palestinian terrorists and IDF forces to create a new blood libel against the Jewish state. The network’s actions served as a reminder of just how poisonous a role Qatar plays in the war against Israel. Yet rather than respond with a full-throated assault on the jihad network and the regime that controls it, Israel’s government is following the Biden administration’s lead and treating Qatar as a “moderating force” in relation to Hamas and more generally.

Later this year, Qatar will host the World Cup Soccer Championship. Qatar allegedly paid FIFA officials millions in bribes to buy their votes to beat the United States in the contest to host the games. Rather than tell Israeli soccer fans that with all due respect to their love of the game, Qatar is Hamas’s headquarters and Iran’s best friend, and they should watch the games on TV rather than risk a trip to the terror capital, Israel is trying to organize direct flights to Doha during the games. Moreover, government officials enthusiastically parrot the absurd claim that Qatar may soon join the Abraham Accords, despite the fact that the Qataris have done everything possible to undermine Israel’s peaceful ties with its neighbors.

Reaboi notes, “But for Qatar’s sponsorship, the Muslim Brotherhood movement would be dead in today’s Islamic world.”

It’s all as clear as day: Qatar is a bitter enemy and a danger to Israel. It is time that we see the light and act accordingly.