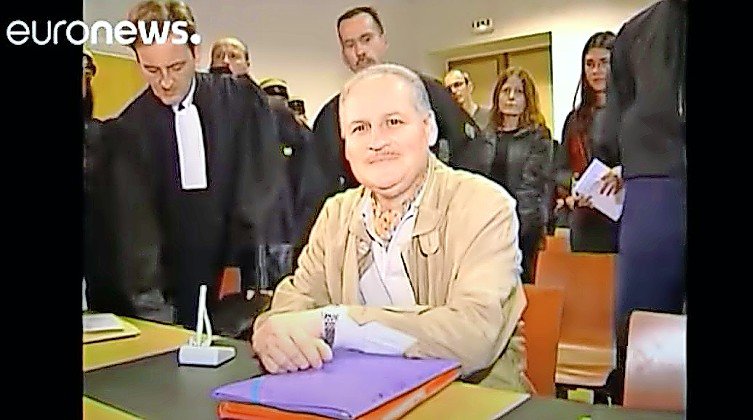 Ilich Ramírez Sánchez, aka Carlos the Jackal, appears in a French court in 2011.
By Yaron Niski and Danny Liber, Israel Hayom

Ilich Ramírez Sánchez, known as Carlos the Jackal, is an international terrorist who for decades was the most wanted fugitive in the world. Born in Venezuela to a wealthy family, his father was a devout communist who hated the West and — over the objections of his wife — even named his son after Soviet leader Vladimir Ilyich Lenin.

Carlos got involved in political struggles at a young age; by his own confession he was 15 when he first kidnapped and murdered someone. His terror activities led to the deaths of over 1,500 people, mostly while working for the Popular Front for the Liberation of Palestine, to which he was first exposed after getting expelled from university and joining a PFLP training camp for foreign volunteers in Jordan in 1970.

He experienced firsthand the events of Black September, when King Hussein had thousands of Palestinians massacred. Carlos fought on the Palestinian side, and later joined the PFLP.

During this time, he terrorized targets in Israel and Europe. All major intelligence agencies tried to capture him, but he managed to elude them for 20 years, hiding in countries such as Syria, Jordan, Iran, Iraq and Sudan.

He was close to such leaders as Iraq’s Saddam Hussein and Libya’s Muammar Gaddafi, and as a mercenary terrorist, collaborated with other Arab leaders against the West and Israel.

In 1994, after two decades on the run, Carlos was captured by French agents in a daring mission and has since been imprisoned in France.

Directors Yaron Nisi and Dani Liber interviewed Carlos on the occasion of the release of the second season of “Enemies,” a docu-action series on the secrets of Arab leaders viewed through the eyes of Israeli intelligence services.

They are working on a series to depict the years-long pursuit of Carlos. Below are some excerpts from the rare interview.

Q: Can you begin by telling us who you are and from where you are speaking to us?

A: My name is Ilich Ramírez Sánchez, and the media calls me Carlos the Jackal. I am from Venezuela, my Venezuelan parents have long passed. I am a communist, just like my father, a Stalinist communist. I believe in God, I am a Sunni Muslim. I believe in the goal of Palestine. I was the first non-Arab person to join the Palestinian struggle. I have killed at least 83 people myself, and between 1,500-2,000 have been killed at my command.

Q: Why have you been dubbed Carlos the Jackal?

A: Throughout my life, I’ve had more than a hundred fake passports. One of the first ones I used, while on a mission in Europe, was a Peruvian passport made in Baghdad, and the name written on it was Carlos Andrez Martines Tores. After the shooting mission, which was published in the media, they started calling me Carlos. I was dubbed “the jackal” later, inspired by the novel “The Day of the Jackal,” which was found among my belongings in a hotel room on one occasion I fled. My Palestinian name is Saleem Muhammad.

Q: How did you come to be involved with the PFLP?

A: I come from a very interesting family. My father was an anti-Zionist and a communist. My mother was a social democrat and she was very pro-Jewish but anti-Zionist. She said the Jews had been slaughtered by the Germans, by the Nazis, and should be protected. It was very strange, but my parents had opposing views. I was involved in anti-Western groups back in Venezuela. In 1970, the Palestinians had a combat training camp in Jordan, so I said to my friends I would go first and from there we’ll go to Venezuela and fight the guerilla war. I went to Jordan in July 1970. I was the only foreigner. I am their hero, one of the survivors; I was a great fighter. Afterward, I joined the PFLP, so this is how I unintentionally became the first foreign member since November 1970. The Palestinian fighters respected me a lot.

With time, rumors of Carlos’s “success” began to reach the Arab leadership, who viewed him as a seemingly innocent South American who could accomplish great things for them, and so began a relationship between Carlos and Gaddafi.

Q: When did you first hear about Gaddafi?

A: When he came to power, it was on the news. Our paths crossed a few times, but he was completely paranoid, you know. He feared everyone and everything. He didn’t sleep at night. He was with people at night. During the day, he would go out, and was never at home.

Q: You lived there, right? Did you have a house?

A: No, I didn’t have a house. There was a hotel there with small houses that the Italians had built, and when I was in Libya, I would stay there. It was convenient. There was the beach and good food and they would bring the food to me. I was there for several months. The Libyans needed help. We advised them on various matters and were asked to train Gaddafi’s forces. There was a Nazi officer there who had been a professor at a university in Germany and he tried to make an atomic bomb for Gaddafi, I remember that. That was very funny.

Q: And what did Gaddafi have to say about Israel?

A: Don’t forget, Gaddafi was a patriot. He worked for the Arab cause and wanted to liberate Palestine. He was against Israel, against the State of Israel.

Q: How much money would you say Gaddafi gave Palestinian organizations to fight against Israel?

A: Over the years, Gaddafi transferred hundreds of millions of dollars for the Palestinian uprising. He wanted to get rid of the State of Israel, of course.

The most dramatic operation in which Carlos and Gaddafi collaborated was the abduction of Organization of the Petroleum Exporting Countries (OPEC) ministers in Vienna in 1975, an operation which turned Carlos into one of the most recognizable terrorists of the time.

He and his men infiltrated a government building armed with Kalashnikovs and grenades, broke into the room where the ministers were holding a conference and took over the building. Carlos managed to do the unthinkable: take hostage a staggering 60 people, mostly senior Western diplomats, get a bus to the airport, and fly to Libya with all the hostages aboard.

The goal of the operation was, according to Carlos, twofold. First, to abduct and execute the oil ministers of Iran and Saudi Arabia, two countries Gaddafi personally hated and which supported the lowering of oil prices, whereas he wanted to see them go up. Second, to secure the release of Palestinian terrorists.

As part of their demands, the kidnappers managed to get Australian media to broadcast a statement of support for the Palestinian struggle every hour. They also demanded that Palestinian prisoners jailed in Israel be released in exchange for the hostages.

Three people were killed and 11 wounded during the takeover of the government building by Carlos and his men.

“I shot one of the people there and managed to calm the winds. Then we divided the hostages into two groups: those we considered enemies, including the Iranians, Saudis and their friends the Lebanese, Algerians and the Iraqis. I told everyone to be quiet or we would kill them. Austrian police tried to break into the building and started a shootout. A policeman was injured, as was one of our members,” he recalled.

It was later claimed that he had taken advantage of the fact that Gaddafi had fled and negotiated the release of the hostages vis-à-vis Western countries. Carlos is said to have pocketed tens of millions of dollars and even taken an enormous bribe not to assassinate the Iranian and Saudi ministers.

After the incident, the PFLP, which did not like Carlos’s methods, expelled him from its ranks. He set up his own terrorist organization, whose members were available for hire, for anyone who was in need and could afford it.

And yet, Carlos described Gaddafi as “an honest and brave man, but he was completely paranoid, and I remember one of his associates showed me the medicine he took. When I saw it, I told him not to take it. It was dangerous and addictive, very dangerous. Gaddafi took it and went crazy, and in the end, was completely hooked on these drugs. It’s very sad. Those who gave him the drug and let him get addicted are the ones who betrayed him.”

Q: Can you give us a few examples of his paranoid behavior?

A: Gaddafi never slept at the home of his second wife, who was very sweet, and the children were very generous, and always said hello when we went to the beach. He used to sleep in his car, which was not luxurious. He used to travel to southern Tripoli plantations, where he slept. When he would wake up, he would tell his driver to move a few meters away from there. He was completely paranoid. He thought someone wanted to kill him, to blow him up. In some way, he was right, but this was his way of doing things.

Q: What did the world think about him?

A: I am not sure he was internationally revered. I think because he helped and gave millions of dollars to everyone, and that is why they associated with him, but people did not like him so much. He was a strange person.

Q: And what did the Libyans think about him?

A: I think he was very popular in the Libyan streets. He worked for the Palestinian struggle and his people, and what he did for Libya is unbelievable. Libya became a peaceful country, everyone could go to school — men and women alike — and women could go to university. Every man or woman who finished a Libyan university could travel anywhere in the world to further their studies, and the state paid for everything. But I don’t mean to defend him; he made too many mistakes. He did not listen to me and was killed in a horrible way.

Gaddafi was assassinated on Oct. 20, 2011, by militants of the anti-Gaddafist National Transitional Council, which ruled Libya for a brief period of time after the civil war.

Carlos claims that the Mossad was also involved in efforts to harm him, and even recruited an agent who was close to him. In 1975, the French intelligence succeeded in capturing Carlos’ contact with the PFLP, and he offered to give up Carlos.

According to Carlos, this person was recruited by the Mossad. The informant and two unarmed police officers went to a PFLP hideout apartment, where Carlos was hiding. Carlos realized he had been betrayed, eliminated the three men, and fled the apartment.

The informant was shot in the face at point-blank range. According to Carlos, he saw agents in the building across the street watch the events. He claimed those were Mossad agents. He said they hurried out of the building to capture him, but he managed to escape through the roof and reach another building. It was one of many times he succeeded in fleeing.