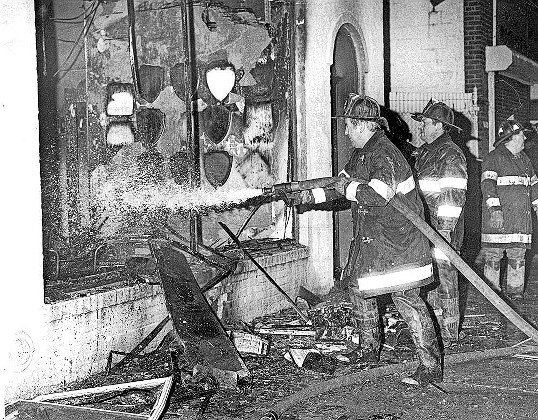 Firefighters use a hose to tackle the blaze through the front window of The Riverdale Press' storefront office on Broadway.
Gretchen McHugh / The Jewish Star 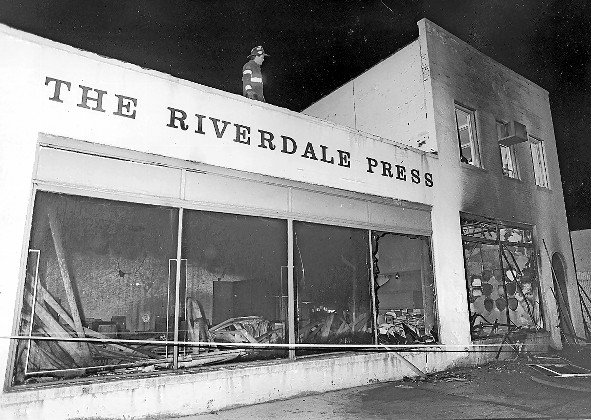 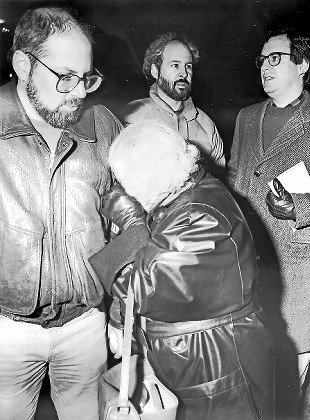 Celia Stein cries next to her son Richard in the aftermath of a firebombing on The Riverdale Press' Broadway office that took place on Feb. 28, 1989. Celia founded the paper with her husband David in 1950.
Gretchen McHugh / The Riverdale Press 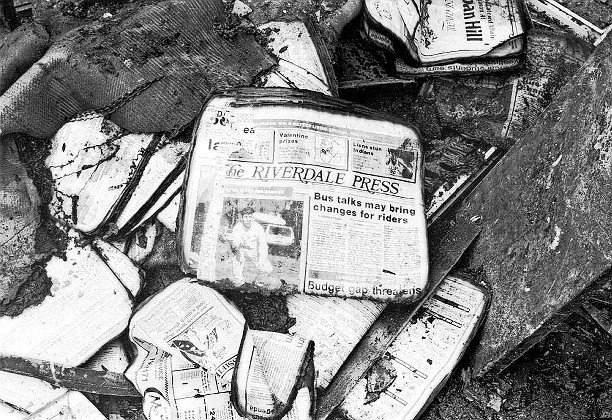 Charred copies of The Riverdale Press rest among burned detritus in the newspaper's Broadway office in the aftermath of the Feb. 28, 1989, firebombing.
Abe Kantor
Previous Next
The Jewish Star

After Iran’s Ayatollah Khomeini demanded, on Feb. 14, 1989, that author Salmon Rushdie be murdered, America’s chain bookstores ran for cover, hiding or removing Rushdie’s The Satanic Verses. There were fatal riots around the world and the book was burned; anyone associated with it felt threatened by the ayatollah’s fatwa, a religious edict.

When Paperbacks Plus, a small independent bookstore in Riverdale stood firm and refused to remove the book, The Riverdale Press published an editorial in its Feb. 23 edition defending the right of free speech, praising Paperbacks Plus and criticizing the national chains. (Click here to read that editorial.)

A terrorist — never apprehended — reacted not with a letter-to-the-editor or op-ed submission, but with a firebomb. The newspaper’s office, then a storefront at 6155 Broadway, was destroyed.

The editorial that triggered the explosive wrath was headlined, “The tyrant and his chains.”

“The chain store executives excuse their surrender to the ayatollah by expressing concern for the well-being of their employees,” editor Buddy Stein wrote. “But by knuckling under, they’ve put others at risk. If a threat can knock the books from the shelves of the ‘Big Three,’ terrorists may reason, think what a bomb in an un- pliant bookstore could do.”

Instead, Buddy was standing in front of the charred building that just hours before had been the home to The Riverdale Press. His mother — who proudly purchased the building with her husband more than two decades before — wept at his side at the sight of the destruction.

A reporter tapped Celia on the shoulder. “What’s going to happen next?”

Celia quickly gained her composure and didn’t miss a beat. “Next,” she snapped, “we’re going to put out a paper. We’ve never missed a deadline, and we’re not going to start now.”

“Our offices were entirely destroyed. The fire was so hot that it melted the telephones and computers in front of the office where the firebombs hit,” Buddy recalled. “This was deadline day, we went to press Tuesday afternoon. Fortunately we had a production facility that was separate from the news office and we relocated there and we brought out that paper on time the next day — with the only front page editorial ever published in my time as editor [30 years] and it was titled, ‘We shall not be silenced’.”

In an act of defiance, nearly every community newspaper in New York State and many around the country reprinted The Riverdale Press editorial.

Nine years later, Bernard Stein won a Pulitzer Prize for editorial writing on politics and other issues, including an editorial with the headline “Why Rushdie matters.”

During a program on WNET-TV titled, “When the Bronx was burning over Salman Rushdie’s book,” Buddy said he hadn’t considered that writing the 1989 editorial  posed any particular risk.

“That was an ‘apple pie and motherhood’ editorial as far as I was concerned.”

He said he had called Paperbacks Plus to ask what they intended to do “and the proprietor responded, I think these were her exact words, ‘We just had a meeting. We’re scared to death, but we’re going to sell that book’.”

The editorial, he said, “was not a defense of The Satanic Verses” — Buddy had not yet read it. “It was a defense of our right to read it and make up our minds. But then I read it, and I think it’s a superb book.”

Buddy said he “wrote an editorial on the anniversary of the bombing every year for 10 years. I did that for two reasons. Rushdie was in hiding and I felt it was important to remember that, and to ask people to offer their support for him. The second reason was to show those that bombed the press that they didn’t win.”

Few remnants, outside of yellowed newspapers and a few singed reference books remain from the firebombing, observed then-editor Michael Hinman in a article published in 2019. A severely burnt award plaque from the New York Press Association — kept as a representative of all the award plaques lost in the fire — hung for many years in Buddy Stein’s Fieldston home. A melted conglomeration of rubber stamps, coins and keys found in the receptionist’s desk drawer is something Richie Stein still holds on to.

Those responsible for the firebombing were never found. A $50,000 award offered by Mayor Koch and New York City’s biggest dailies at the time for information leading to the perpetrators’ arrest was never claimed.

“I am just so grateful that nobody got hurt,” Richie Stein said. “No fireman got a beam on his head. Nobody was walking by and got hit with an accelerant. Those are things that go through your mind.”

Larry Dublin, who was a Riverdale Press staffer in 1989, is probably the most grateful for that. He remembers a couch that used to sit right near the front window, and more often than not, it would serve as a place for him to sleep when he had to stay late some Monday nights.

“That couch was incinerated by the fire,” Dublin said. “Whoever threw that Molotov cocktail probably didn’t think there would be anyone in the offices that late. But it was a Monday night, and I could’ve very well been there. I’m just incredibly grateful that I wasn’t.”

“It wasn’t easy to continue,” Buddy said. “It was scary. We had cops at my home and at Richie’s home. Policemen stationed in front of our homes, 24 hours a day, for two or three weeks after the bombing.”

The weary leader gave all of them a very generous out, letting each of them walk away if they so chose, without any penalty.

“Not one of them took us up on that offer,” Buddy said.

The Riverdale Press is now published by Richner Communications Inc, parent company of The Jewish Star and the Long Island Herald Community Newspapers.