Eikha as testimony to resilience, perserverence 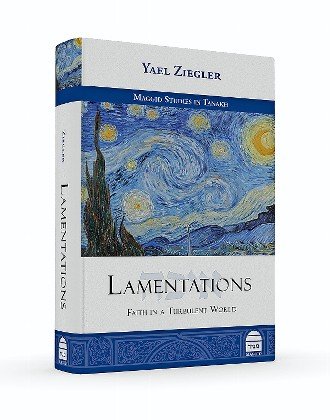 In “Lamentations: Faith In A Turbulent World,” Dr. Yael Ziegler interweaves careful literary analysis combining traditional and academic scholarship with attention to religious themes. She illustrates that Eikha is a testimony to the resilience of faith, allowing people to persevere through adversity and emerge with a more meaningful relationship with G-d, with their nation, and with themselves.

Ziegler is an assistant professor of Bible at Herzog Academic College, a senior lecturer at Matan Jerusalem, and author of “Promises to Keep: The Oath in Biblical Narrative,” and “Ruth: From Alienation to Monarchy.”

The following excerpt is the introduction to first chapter of this book, “A Desolate City”:

The opening of the book of Eikha reveals a melancholic and lonely scene. Jerusalem sobs in anguish amidst the sights and sounds of the aftermath of destruction. Formerly a bustling metropolis, Jerusalem is now nearly desolate; the sounds of the priests mourning and the young women grieving echo in the abandoned city. Jerusalem’s citizens abandon the city plodding wearily toward unknown fate. Jerusalem remains alone with her misery and memories of better times.

Is there a logical progression of ideas in this chapter? Perhaps not. It is possible that the absence of order best captures its timbre. The initial experience of grief is not cogent and analytic, but rather chaotic and turbulent. The chapter’s attention flits from the desolate city to the hordes of itinerant exiles, the jeering enemy, the apathetic passersby, and back to a humiliated city. Portrayals of G-d vary widely, alternating between a G-d who actively punishes the city, an elusive G-d who refused to take note of Jerusalem’s pain, and a righteous G-d whose edicts are just. Erratic movement between one notion and its opposite illustrates the chapter’s frenzied churn of emotions.

Nevertheless, Eikha’s initial chapter strives to grasp the reason for this calamity, eventually attributing it to Jerusalem’s sins. This effort involves a steady movement toward recognition of responsibility, a conclusion that allows Jerusalem to make sense of the madness.

Two distinct routes lead to accountability, running parallel to the two separate speakers of the chapter: the third-person narrator (verses 1-11b) and Jerusalem’s first-person account (verses 11c-22). The third-person narrator easily brandishes the notion that Jerusalem’s sins led to this punishment (1:5), an assertion that tempers our compassion for the beleaguered city.

The narrator’s accusation gains traction in verse 8 with a stark proclamation of the city’s guilt: “Jerusalem has surely sinned!” This denunciation shakes Jerusalem out of her silence, and she interjects in verse 9 with a howl of pain (“Look, Lord, at my affliction!”)

When Jerusalem picks up the narrative in verse 12, she initially focuses more on her unbearable sorrow and on G-d’s overbearing anger than on her culpability, to which she only alludes (1:14). Gradually, Jerusalem comes to recognize divine justice, acknowledging her own rebelliousness and boldly proclaiming G-d’s righteousness (1:18). In the final verse of the chapter, Jerusalem explicitly references her sins, concluding her arduous journey toward an admission of guilt.