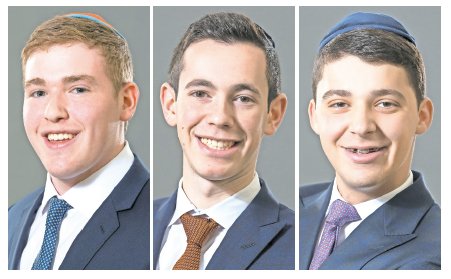 Valedictorian Jacob Penstein (left) was singled out from the start by his diligent disposition and academic acumen. Jacob is well-read, eager to engage in dialogue and clear in his views. Jacob has become an incredible leader in chesed and character, making DRS a holier place through a program he launched with YACHAD, coalescing his two passions — learning and chesed. He will continue his growth next year at Yeshivat Har Etzion.

Salutatorian Yehuda Frankel (center) excels in many areas. He earned a place in the highest shiur, working hard to develop his skills, and spreads Torah to others through the school’s newsletter. Yehuda is a volunteer at Friendship Circle and i-Shine, always looking to lend a hand. Athletically, he is an integral member of the DRS hockey team. And, of course, he has risen to great heights academically. Yehuda has left his mark on DRS with his refined middot tovot, characteristic smile, and outstanding kochot. Next year he will achieve great things at Shaalvim — and beyond.

Keter Shem Tov awardee Joseph Greenberg  (right) is a shining example of the Mishnah: “Ther world stands on three things — Torah, avodah and chesed.” Joe learns with hasmadah, davens beautifully and is a well-known doer of chesed. Whether running the Kulanu mishmar program or coaching kids in flag football, Joe  goes all in. He was a key contributor to DRS’s Mock Trial team and always has a kind word to say. Joe was voted junior and senior class president, and will see continued success in Yeshivat Netiv Aryeh.