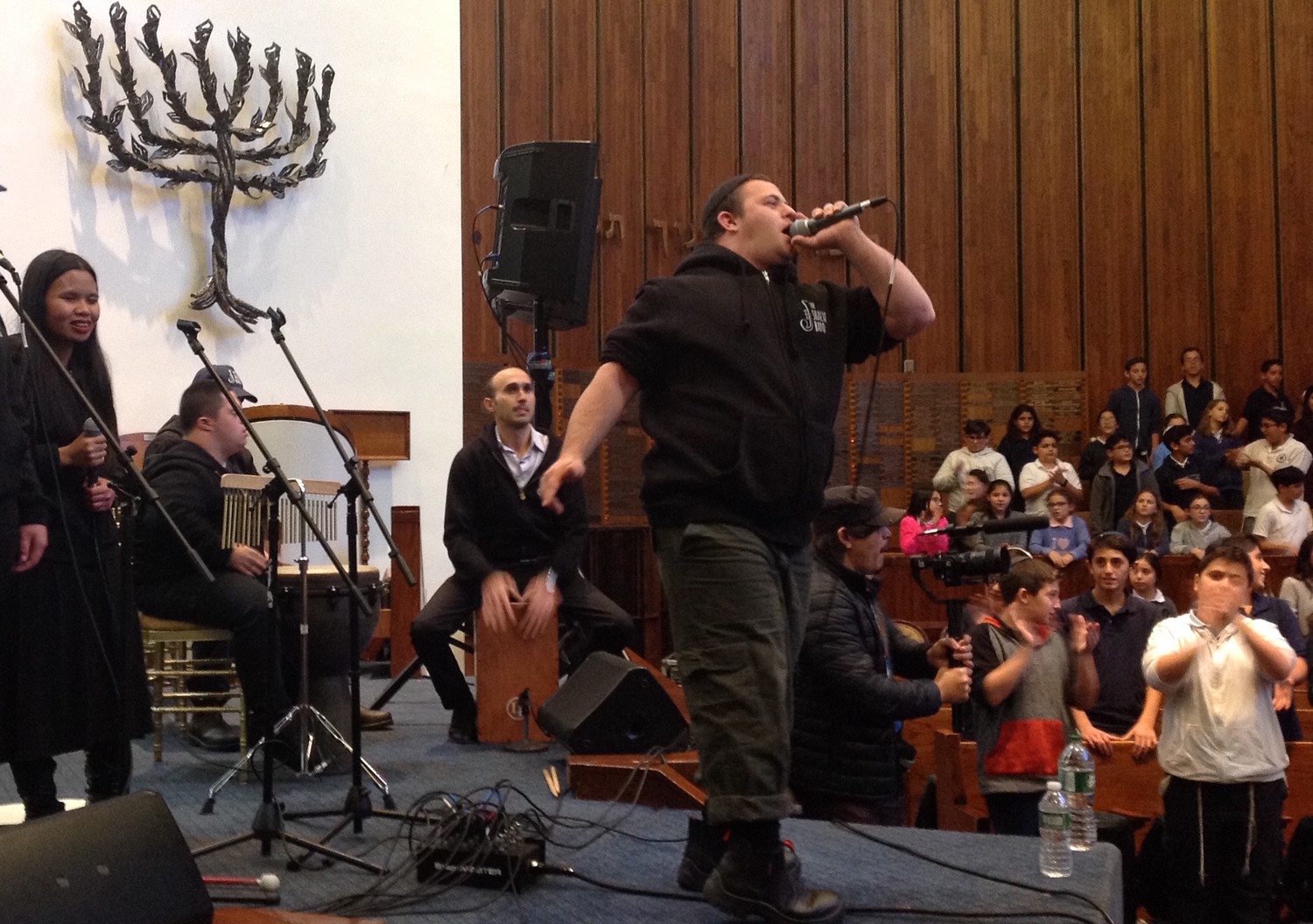 Yair Pomburg raps during a performance of the Shalva Band at the North Shore Hebrew Academy in Great Neck.
Ben Sales
By Ben Sales, JTA

Middle schoolers at the North Shore Hebrew Academy in Great Neck went wild when Dina Samteh hit her high notes, jumping out of their seats, cheering and clapping.

Samteh, 20, is blind, so she can’t see their conga line-style dancing. But she can hear and feel it.

Next to her, Yair Pomburg, 26, throws his entire body into beating the bongo drums, then steps forward and raps, in Hebrew, to the Israeli peace song, “Od Yavo Shalom Aleinu.”

Over the course of a 75-minute concert last week, the seven members of the Shalva Band play everything from the Disney hit “Let It Go” to Matisyahu’s “One Day” to Adele’s “Someone Like You.”

In many ways, this Israel band staged a typical, high-energy Jewish music concert for teenagers, and the crowd is feeling it from start to finish. The singers belt out Israeli songs, religious songs and a smattering of pop before concluding with “Hatikvah,” the Israeli national anthem. By the middle of the set, the kids are out of their seats and crowding the floor.

What makes the Jerusalem-based Shalva Band unique is that its members are people with disabilities — Pomburg, for example, has Down syndrome. Others have Williams syndrome and cerebral palsy.

“Since I began singing, I had a dream of being on stage and singing all the time and making people happy.”

Samteh and her bandmates appear to have met that goal. The Shalva Band is on its first international tour, with more than a dozen stops at day schools and fundraisers in the United States, Canada and Mexico. After a week back in Israel, it’s on to the United Kingdom and Russia.

The band was founded 12 years ago by Shai Ben Shushan, a drummer who had sustained a head injury in special forces combat. He had to live six months with his mouth surgically shut, after which he re-learned to speak and eat.

The experience of disability led Ben Shushan to volunteer with Shalva, an Israeli organization that provides a range of services to people with disabilities, including therapy, arts programs, job training and advocacy work. At that time, its directors had noticed several kids with standout musical talent and tapped Ben Shushan to form a band.

Shalva Band members range from their late teens to mid-20s; some have been practicing together since they were 6. They say they love making music — but also perform just to prove they can.

“Every individual with or without disability has some capabilities, and it’s critical to focus on those if you want a person to have any meaning and fulfillment,” said Kalman Samuels, a co-founder of Shalva. “These band members were chosen because they showed musical ability.”

Ben Shushan spent a year teaching the kids music — they began with basic melodies and rhythms — before the band was ready to begin performing  in Israel. A professional musician himself, he said directing the band comes with unique challenges: For example, it took Pomburg two years to get his first drum beat down. Now, however, Ben Shushan calls him “one of the best drummers I know.”

On the international tour, the band is traveling with a support staff of more than one person per band member, including a musical therapist who also backs up as a flautist.

Ben Shushan said the key to success is sensitive time management. “You want to know their abilities, but you need to know when to stop, to say it’s too hard,” he said. “It takes sensitivity to their feelings. If you see someone is having a hard time, you need to strengthen him.”

But the overwhelming impression of the Shalva Band while on the road is that it is a hardworking group of musicians hoping for their big break.

Following their concert at the North Shore Hebrew Academy, the band members load their instruments in the back of a van and pile in, bantering or putting on headphones and tuning out. As Ben Shushan debriefs them en route to their next gig, he sounds less like a teacher and more like a manager pushing his musicians just a little harder: He chides the lead singers for paying too little attention to rhythm. He tells the group to focus less on the crowd and more on the music. He warns them not to wear out their voices.

“I know it feels like I’m drilling into you,” he said, sighing. “But you’re at a level now where you can take it.”

The band performs more than 50 times a year around Israel, but is not yet profitable. Samuels estimates that Shalva invests $120,000 in the band a year. This two-week trip alone will cost upwards of $60,000. World Center for Jewish Education, an organization that works with schools to improve their Jewish studies curricula, helped organize the trip and connected the band to the schools where it performed.

Ahead of the trip — which began Oct. 25 and includes stops in Montreal, Toronto, New York, New Jersey and Mexico City — the band practiced for up to eight hours a day. Ben Shushan hopes eventually to put out an album and get the group on the radio. The band has several videos on YouTube.

Despite their commitment, for some of the band members, music is just a hobby. Pomburg, for example, works at a soap factory and waits tables at Cafe Shalva, the organization’s in-house coffee shop.

Still, others have enjoyed moments in the spotlight so much that they hope to go pro. Samteh, who joined the Shalva Band five years ago, has performed with leading Israeli musicians and traveled abroad several times to sing. At first, Samteh said, she found it difficult to share the stage. But now she can’t imagine doing it alone.

“To sing with other people, you have to learn to listen,” she said. “In the beginning it was hard, but now it’s really successful. Now I don’t know how I would sing without them.”