Crying for Argentina after 28 years, as the AMIA killers continue to kill 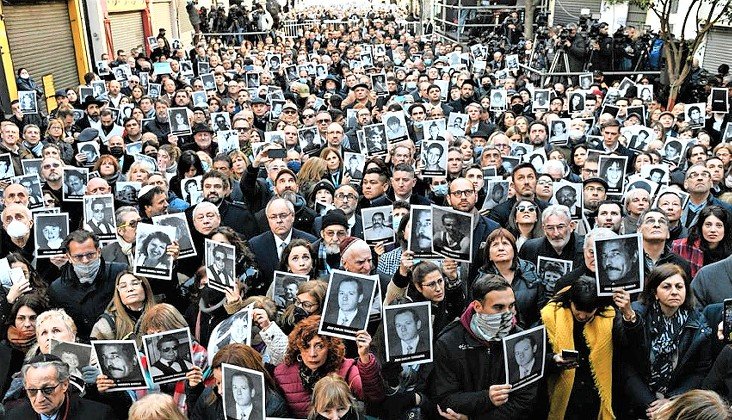 Thousands attended a memorial event in Argentina dedicated to the 85 people killed and 300 others injured during the 1994 AMIA bombing in Buenos Aires, July 18.

Thousands of people attended a memorial event in Argentina on Monday dedicated to the 85 people killed and 300 injured when the AMIA (Asociación Mutual Israelita Argentina) in Buenos Aires was bombed on July 18, 1994. An 86th person, prosecutor Alberto Nisman, was murdered in 2015 as his investigation of the case reached its climax. It was the single deadliest anti-Semitic attack since the Holocaust.

Twenty years after the AMIA bombing, also on July 18, terrorists in Bulgaria targeted a bus full of Israeli tourists, killing five Israelis and one Bulgarian — including a pregnant woman — and injuring more than 30.

Iranian tentacles were found touching both events — as well as in the bombing of the Israel embassy in Argentina two years before the AMIA attack, killing 29.

In September 2020, two Hezbollah terrorists were convicted in absentia for the Bulgaria bombing. No one has ever been tried for the AMIA attack.

As participants in the Buenos Aires memorial event waved black-and-white photos of the victims, a siren was sounded at 9:53 am, the exact moment when a van laden with explosives was detonated 28 years ago.

“How can we explain that none of those responsible for such an atrocity have been able to be captured?” AMIA President Amos Linetzky asked rhetorically. “How can so much impunity be explained?”

Linetzky pointed out that “the swine, the wretches” accused of staging the bombing, for whom red arrest alerts were issued by Interpol, continue to travel freely around the world. He said that earlier this year, one of the accused attackers stood with the Argentine ambassador at the inauguration of the Nicaraguan president.

Linetzky noted that prosecutor Alberto Nisman — who turned up dead with a bullet in the head — had denounced the “Iranian infiltration in the region mainly through its alliance with Venezuela.”

Argentine President Alberto Fernandez did not attend Monday’s ceremony but wrote on Twitter: “28 years after the attack on AMIA, we once again say ‘present.’ For the 85 people murdered that morning, for their families and for all Argentina.”

Earlier, Fernandez met with AMIA authorities at the president’s office and reiterated his commitment to fighting anti-Semitism, officials said.

Among those in attendance on Monday was US Special Envoy to Monitor and Combat Antisemitism Deborah Lipstadt.

“High-level Iranian government officials were directly implicated in the attack, directing Hezballah terrorists to carry it out,” Lipstadt wrote on social media. “The United States stands with Argentine Jews — and all Argentines— in seeking accountability for the horrific actions of that day. The callous murder of civilians cannot stand, and the United States is committed to countering Hezbollah, and Iran’s, malign influence.”

State Department spokesperson Ned Price released a statement on Monday commemorating the attacks in both Argentina and Bulgaria, saying “the two Hezbollah attacks, carried out with Iranian support, devastated hundreds of families.”

He noted that justice has not been served in either case.

“The United States is committed to countering Hezbollah and Iran’s malign influence. The funding, training, weapons and other support Iran provides Hezbollah support complex and heinous terrorist attacks like these. The callous murder of civilians must not stand,” he said.

During one of many commemorations around the New York area, Avi Weiss of the Hebrew Academy of Riverdale began, “Twenty-eight years. Days pass slowly, years quickly, and yet the pain is more piercing than ever.”

“The Bible records G-d’s searing rebuke of Cain after the murder of Abel, the first murder in world history: “kol demei achicha tzoakim eilai min ha’adamah (the voice of your brother’s bloods cry out to me from the ground),” Rabbi Weiss continued. “Why bloods?

“And so we gather to remember, to resolve, in the words of Job: “eretz al techasi dami, ve’al yehi makom lezakati (O earth, do not cover my blood; let there be no resting place for my outcry).”

This report was assembled from multiple sources, including a dispatch by Faygie Holt of JNS.