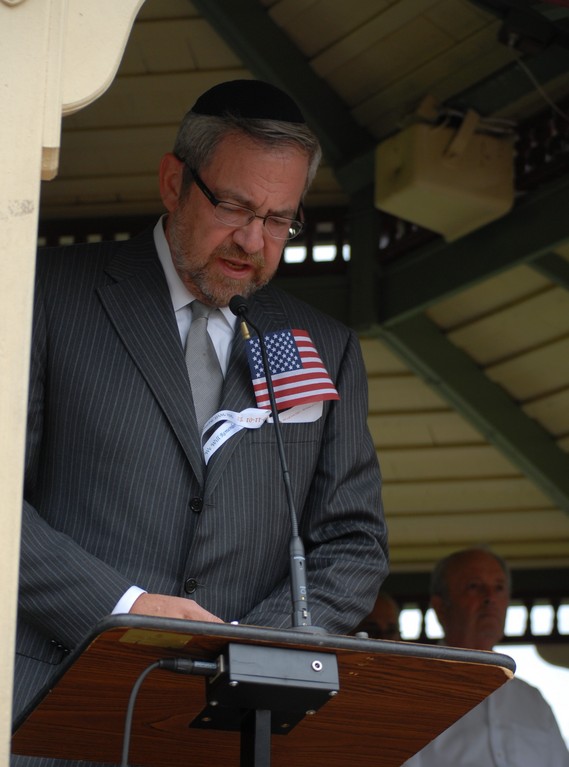 Rabbi Kenneth Hain of Congregation Beth Sholom in Lawrence, gives the invocation at the Cedarhurst 9/11 commemoration
Photos by Isabel Slepoy 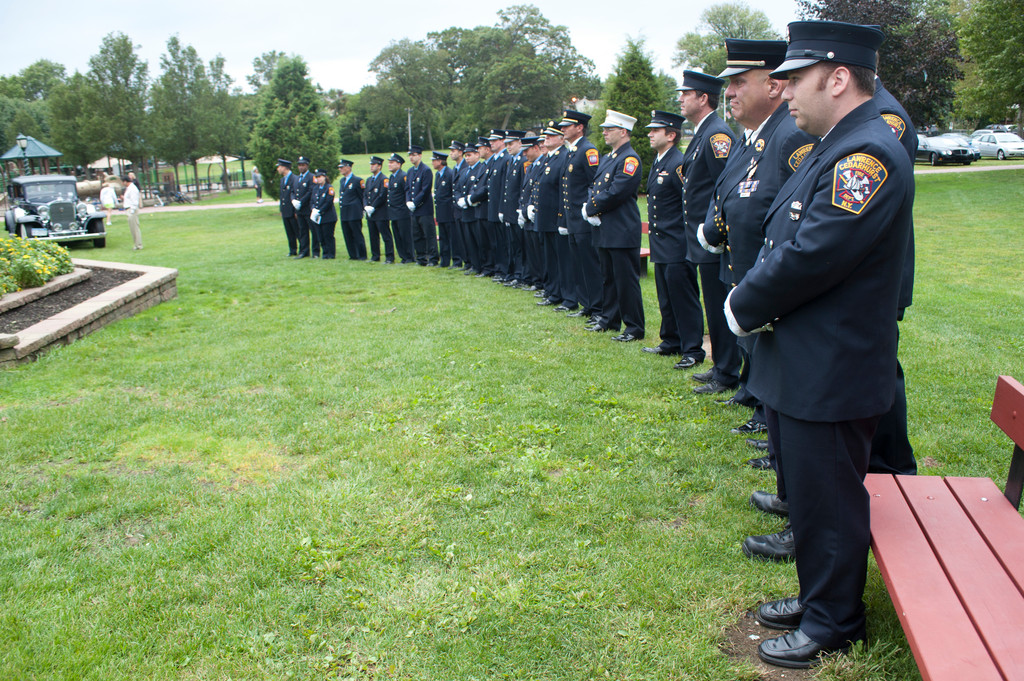 A crowd of a hundred gathered in Andrew J. Parise Cedarhurst Park to reflect on the tenth anniversary of the September 11 attack on the World Trade Center, hearing from local elected officials, clergy and survivors. “This is for the Jewish people a month of reflection and today we engage in this holy activity,” said Rabbi Kenneth Hain of Congregation Beth Sholom. “We ask for remembrance of a terrible tragedy, innocent lives of people who did nothing wrong but go to work on that Tuesday morning.”

Among the spectators, Cedarhurst resident Gizella Elbaz remembers working for Verizon on the 12th floor of the south tower of the World Trade Center. Having witnessed the 1993 garage bombing of the complex, which killed six people, Elbaz immediately fled from the building. She returned a week later to survey the damage. “In that first week, I went from shiur to shiur, the shul and the support of my family helped me,” Elbaz said. “On that Rosh Hashana, I thought about why I survived.”

As the towers burned, Bruce Blakeman looked up in disbelief as the north tower burned. “I could not imagine the incompetence of a pilot crashing into the city’s biggest building,” said Blakeman, who served as a commissioner for the Port Authority of New York and New Jersey, which owned the property. “My fears were realized with the second airplane crashing into the south tower. We had to figure out how to get people home and lodging for people stuck at the airports.”

The Lawrence Philharmonic Orchestra, a group comprised of local students and older residents, performed a mix of patriotic compositions by John Philip Sousa and Broadway classics by George Gershwin. Trombonist Philip Kalban remembers that fateful morning in his Midtown law office with his partner Herman Badillo, watching the towers burn on television. “We were watching in horror, my daughter saw the building go own and it affected her tremendously,” Kalban said. Looking at the rebuilding, the Woodmere resident said that it was emblematic of the city. “New York has a tremendous amount of life in it and it revitalizes itself constantly.”

Harry Pfeffer worked at Prudential’s downtown office, escaping by foot across the Brooklyn Bridge. Returning a week later to his office, the sight of debris and uniformed troops brought the imagery of war to the city. Looking ahead, there is one name that Pfeffer wished to see retired. “We should stop calling it Ground Zero, that’s emptiness. It’s the World Trade Center.”

June 1967 - The decision to capture the Old City

You’d be surprised to learn who profited from Jewish Death