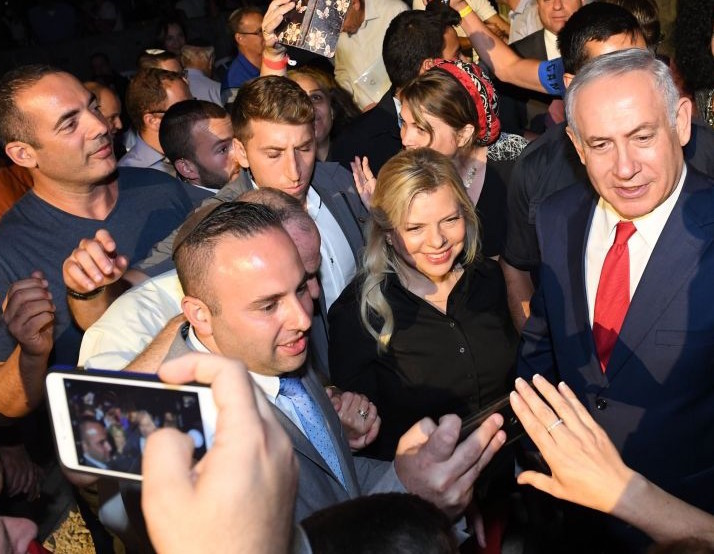 Prime Minister Netanyahu and his wife, Sara, at an event in Barkan, Sama-ria, marking 50 years of settlements in Judea and Samaria.
Kobi Gideon/GPO
Combined Sources

Speaking to thousands at the Barkan Industrial Park in northern Samaria, Netanyahu said that the Jewish state would not evacuate any more settlements.

“There will be no more uprooting of settlements in the land of Israel,” he said at an event commemorating the 50th anniversary of Israel’s reentry into Judea and Samaria. “This is the inheritance of our ancestors. This is our land.”

Netanyahu noted that in the past, when Israel withdrew its citizens and settlements in peace bids, the evacuated areas became launching grounds for rockets aimed at Israeli communities.

He recalled how the demolition of 21 settlements in Gaza and four in northern Samaria in 2005 led to a major increase of violence against Israel.

“It has been proven that it does not help peace,” he said. “We’ve uprooted settlements. What did we get? We received missiles. It will not happen again.”

He added: “To those who want to uproot what we’ve planted, [I say] we will deepen our roots.”

“Samaria is a strategic asset for the state of Israel,” Netanyahu said. “It is the cradle of our people and the key to our future. Because from these high hills, the heights of Mount Hatzor, we can see the entire country, from one side to the other.”

The hilltops of Samaria overlook Route 6, one of Israel’s major highways, and Ben-Gurion Airport, Netanyahu said.

“So we will not fold,” he said. “We are guarding Samaria against those who want to uproot us. We will deepen our roots, build, strengthen and settle.”

Netanyahu said, “This is the land we inherited from our forefathers. This is our land. We have returned here to remain for eternity.”

“We are leading this great endeavor together,” Netanyahu said of the partnership between his office and the residents of Judea and Samaria. “There is no government that has done more for the settlements than this government under my leadership.”

“The land in Samaria is crying out for new settlements,” he said. In particular, Dagan, as a former resident of Sa-Nur who lost his home in 2005, asked Netanyahu to allow his council to rebuild those four northern Samaria settlements.

Netanyahu’s visit to Barkan is the third at an official event in the West Bank in recent weeks. Earlier in August he spoke at a ceremony establish a new neighborhood in Beitar Illit and in June, he spoke at ceremony inaugurating a new medical school at Ariel University.