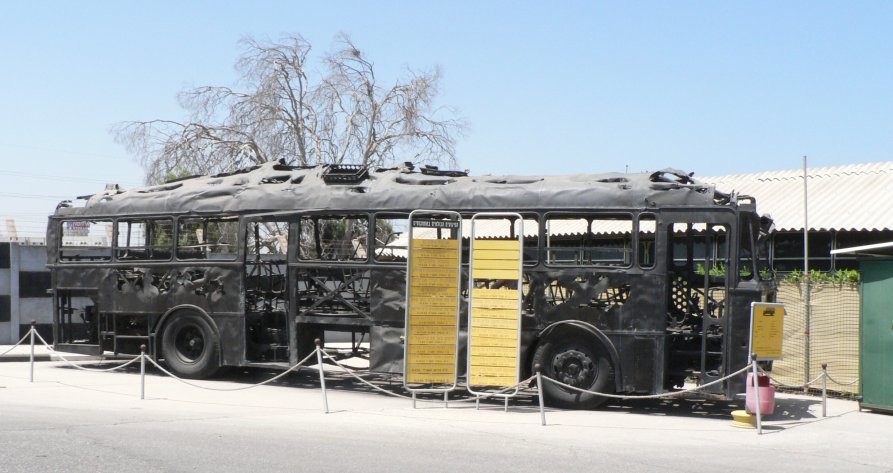 The remains of the Israeli bus hijacked by Palestinian terrorists in 1978.
MathKnight via WikiCommons
By Stephen M. Flatow

European countries are not exactly known for their love of Israel. Yet recent actions taken by the governments of Norway and Belgium suggest that, in at least one important respect, those two nations have gone much further than the U.S. in confronting the problem of Palestinian incitement against Israel.

Belgium, which has been giving the Palestinian Arabs more than $20 million annually, announced this week that it “will put on hold any projects related to the construction or equipment of Palestinian schools.” This followed a report by Palestinian Media Watch that a Belgian-funded Palestinian school, the Beit Awwa Basic Girls School, has changed its name to the Dalal Mughrabi Elementary School.

For those who don’t recognize the name, Mughrabi was the leader of a squad of Fatah terrorists who landed on Israel’s shore, just north of Tel Aviv, on March 9, 1978. There was another young woman on the beach that morning. Gail Rubin, an American Jewish nature photographer, was photographing rare birds near the water. Gail’s work had been exhibited at the Jewish Museum in Manhattan, and other major venues. She also happened to be the niece of Sen. Abraham Ribicoff (D-Conn.).

One of the terrorists, Hussain Fayadh, later explained to a Lebanese television station what happened next: “Sister Dalal al-Mughrabi had a conversation with the American journalist. Before killing her, Dalal asked: ‘How did you enter Palestine?’ [Rubin] answered: ‘They gave me a visa.’ Dalal said: ‘Did you get your visa from me, or from Israel? I have the right to this land. Why didn’t you come to me?’ Then Dalal opened fire on her.”

As Gail lay dying on the beach, Mughrabi and her comrades strolled over to the nearby Coastal Road. An Israeli bus approached; they hijacked it. During the ensuing mayhem, they murdered 36 passengers, 12 of them children. Mughrabi was killed by Israeli troops. Hussain Fayadh, who survived, was sentenced to life in jail, but then released in a prisoner exchange — and was later hired as a senior adviser to Palestinian Authority President Mahmoud Abbas.

A spokesperson for the Belgian Foreign Ministry told the Algemeiner this week, “Belgium unequivocally condemns the glorification of terrorist attacks [and] will not allow itself to be associated with the names of terrorists in any way.”

Norway does not want to be associated with Mughrabi, either. Earlier this year, the PA decided to name a women’s center in the town of Burqa after Mughrabi. The Norwegian government, which had contributed $10,000 to the center, demanded — and received — a full refund.

The U.S., however, has taken no such steps to restrict the aid it provides to the PA. The Trump administration gave the PA $344 million this year. Congress tried to pass legislation (the Taylor Force Act) to take away the portion of the aid that the PA gives to imprisoned terrorists and the families of suicide bombers. But the administration insisted on adding a bunch of loopholes that will render the legislation almost toothless.

I’m not aware of any Belgian or Norwegian citizens who were harmed by Dalal Mughrabi. Yet those governments have acted appropriately to oppose glorifying her. The U.S. has much more reason to penalize the PA for honoring Mughrabi: she murdered the niece of a U.S. senator. Yet America has done nothing on this issue.

If the murder of Gail Rubin is not reason enough, here’s another. Palestinian Media Watch reports that the PA not only has named five schools after Mughrabi (and 26 others after other terrorists) — it has also named three schools after the Nazi collaborators Haj Amin el-Husseini and Hassan Salameh.

That’s right, Nazi collaborators. From World War II. The war in which 405,399 American servicemen gave their lives. In other words, 405,399 reasons for the Trump administration to tell the PA: you won’t get another dime from American taxpayers until you stop honoring those who collaborated with America’s enemies in World War II.

Thank you, Belgium and Norway, for leading the way in the fight against honoring and glorifying Palestinian terrorists. I hope and pray my own country will follow your lead.

Stephen M. Flatow, a vice president of the Religious Zionists of America, is an attorney in New Jersey and the father of Alisa Flatow, who was murdered in an Iranian-sponsored Palestinian terrorist attack in 1995.