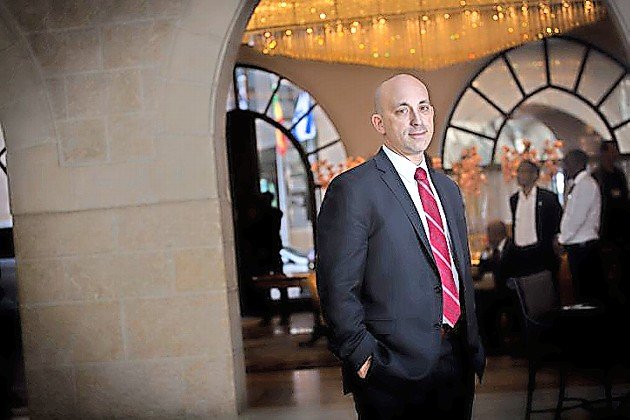 The ADL’s pathological refusal to state the truth about Amnesty indicates that in the campaign against the existence of the State of Israel, the ADL is not on the side of the Jews.”
By Caroline Glick

One of the more curious responses to Amnesty International’s Israel Apartheid report last week came from the Anti-Defamation League. On Monday, the heads of Amnesty held a press conference Jerusalem to present the main “findings” of the “investigation” they conducted regarding the status of Israel’s existence.

It turns out that after years of “careful study,” Amnesty’s entirely professional “researchers” determined that Israel has no right to exist. The Law of Return, which grants automatic citizenship to Jews after 2,000 years of homeless wanderings, is a type of apartheid. Israel’s Jewish identity is apartheid, they said.

The purchase of private land by Jews in sovereign Israel and in Judea and Samaria is apartheid. The use of government land by Jews is apartheid. Enforcement of the laws of the state on non-Jews—you guessed it — is apartheid in the eyes of Amnesty’s hard-nosed, totally unbiased “investigators.”

Amnesty concluded as well that since Israel is an apartheid state that has no right to exist, it is guilty of crimes against humanity and (it almost goes without saying), of war crimes. Unlike the wretched, cruel, greedy and avaricious Jews, the Palestinians are as pure as the driven snow. The word “terror” only appears three times in Amnesty’s 210-page tome, and is never mentioned as a means to explain any defensive action Israel has undertaken.

As was to be expected, Amnesty used its new “Jews are criminals” report to renew its call for Israel and its citizens to be tried for war crimes before the International Criminal Court in The Hague. The “human rights” group also rode its blood libel wave to renew its call for economic sanctions and an arms embargo against Israel. Amnesty capped its bloodlust off with a call for Israel’s destruction through the immigration of millions of hostile, foreign-born Arabs allegedly descended from Arabs who left Israel during the 1948 pan-Arab invasion of the nascent Jewish state.

Amnesty’s report was roundly condemned as anti-Semitic propaganda by Israel’s Foreign Ministry and Jewish groups in the United States and worldwide. You don’t need to be an anti-Semitism researcher (or a Jew) to recognize that Amnesty’s report flowed from the same hate-infested swamp as “The Protocols of the Elders of Zion.”

And this brings us to the ADL’s response. The Anti-Defamation League, which has an annual budget of around $100 million, is supposed to be the leading Jewish organization in the Diaspora in the fight against Jew-hatred. But Amnesty’s declaration of war against the Jewish state placed the ADL in a bind. Just a bit over a year ago, the ADL defended Amnesty.

In October 2020, then-Secretary of State Mike Pompeo announced his plan to list Amnesty, Human Rights Watch and Oxfam as anti-Semitic organizations due to their efforts to advance the anti-Semitic boycott, divestment and sanctions campaign against Israel. Pompeo’s plan was in keeping with the Trump administration’s overall policy for fighting anti-Semitism. In December 2019, then-President Donald Trump signed an Executive Order that provided civil rights protection to Jewish students persecuted by BDS campaigns on their campuses.

Given the central role Amnesty and other phony human rights groups play in the political war for the destruction of the largest Jewish community in the world, Pompeo’s planned move was not just reasonable, it was imperative. But rather than applaud him for his resolve, the ADL attacked Pompeo and his plan.

A month later Pompeo made it the official policy of the State Department to treat organizations that support BDS as anti-Semitic groups. But by that time, Trump had lost his reelection bid and the wind had come out of the sails. Pompeo’s statement did not mention which specific groups were anti-Semitic. So, thanks in large part to the ADL, Amnesty and its anti-Semitic comrades dodged the bullet.

On the surface, the ADL’s condemnation of the Amnesty report could have been written by the Zionist Organization of America. But a close look at the ADL’s response makes clear that the organization, which is supposed to lead the struggle against anti-Semitism, hasn’t changed its position since it defended Amnesty from Pompeo’s charge of anti-Semitism.

As the ADL put it, Amnesty’s report was “an effort to demonize Israel and undermine its legitimacy as a Jewish and democratic state. In an environment of rising anti-Jewish hate, this type of report is not only inaccurate but also irresponsible and likely will lead to intensified antisemitism around the world.”

So the report wasn’t anti-Semitic per se, but simply irresponsible. Amnesty didn’t factor in how its blood libels might be interpreted by people who (unlike Amnesty) actually hate Jews.

The ADL statement maintained its line — that Amnesty was irresponsible, not bigoted against Jews — through to the end. The statement concluded, “Amnesty International’s rhetoric is irresponsible. These are not simply abstract words but the kind of spurious charges that, time and again, have placed Jews in danger around the world.”

There are two explanations that pop to mind regarding why an organization that is supposed to be dedicated to fighting Jew-hatred would dismiss as “irresponsible rhetoric” a call for the annihilation of the largest Jewish community in the world by a massively powerful international organization.

The first way to explain the ADL’s behavior is that this was an attempted cover-up. The fact is that the ADL facilitated the Amnesty report, as well as similar reports published by Human Rights Watch and B’Tselem last year. All three reports libeled and demonized Israel as an “apartheid state.”

When the ADL torpedoed Pompeo’s plan to designate Amnesty, HRW and Oxfam as anti-Semitic organizations, it gave them carte blanche to escalate their anti-Semitic campaigns. Had the ADL put aside its progressive politics and hatred for Trump for just a moment to support rather than undermine Pompeo, it is highly likely that these groups would have reconsidered their plans to escalate their war against the Jews.

The cost-benefit analysis of siding with terrorists and Nazi-like Jew-haters from Ramallah to Tehran would likely have looked very different once the US State Department designated these anti-Semitic groups as anti-Semitic groups. Moreover, had Pompeo gone through with his plan, even if Amnesty et al. had stayed on course and published their apartheid slanders, the impact of those slanders would have been a weak flutter of the waves they are making today.

And the Jews — from Israel’s Foreign Ministry to the last Jewish group in the Diaspora — would have had far better ammunition in their efforts to discredit the tsunami of lies flowing out from these groups. Given the ADL’s role in facilitating the massive escalation of the faux human rights’ communities’ war against the Jews, it makes sense that it has decided to pretend that nothing is happening.

Another possible explanation for the ADL’s refusal to acknowledge that Amnesty International is an anti-Semitic organization and that its “Jews are Nazis” report is endemically anti-Semitic is that the ADL has abandoned its mission of fighting anti-Semitism and replaced it with a mission of advancing anti-Semitism — at least of the progressive variety.

Last week, Daniel Greenfield of Frontpage Magazine revealed that the ADL had hired an activist named Tema Smith to serve as its director of Jewish outreach. Smith’s hire is newsworthy because Smith has a long record of anti-Israel, pro-terror and anti-Jewish postings on social media. In other words, she has a long record of anti-Semitic activism, which Greenfield documented.

During the Hamas war against Israel in 2014, Smith posted and endorsed an article that justified Hamas’s abduction and murder of three Israeli teenagers and its massive missile onslaught against Israeli population centers.

In 2020 she wrote, “Here’s the thing: Jews *have* to be ok with Palestinians *explaining* why some turn to terrorism.”

On several occasions, Smith insisted that there is no black anti-Semitism and that it is racist for Jews to claim that there is. She said that Jewish opposition to the deeply anti-Semitic Critical Race Theory stems from Jewish racism.

As for Islamic Jew-haters, Smith has on several occasions defended the jihadist who brutally murdered 66-year-old Sarah Halimi, a retired nursery school teacher, in her Paris apartment, and then threw her out the window.

The ADL’s new Jewish outreach director even attacked the U.S. Holocaust Museum for its criticism of progressive superstar Rep. Alexandra Ocasio Cortez after Cortez obscenely compared detention centers for illegal aliens along the border with Mexico to Nazi concentration camps.

In its squirming condemnation of the Amnesty report, the ADL noted rightly that by negating the Jews’ right to sovereignty within Israel’s 1949 armistice lines, Amnesty “not only delegitimizes the Israeli state enterprise and the Jewish right to self-determination in its historic homeland, but also undermines the vision of a mutually negotiated solution to the Israeli-Palestinian conflict that will provide security, dignity, and self-determination to both peoples.”