Agudah’s Rabbi Shafran on the immigrant kids: Us, them, and the ‘Deep State’ 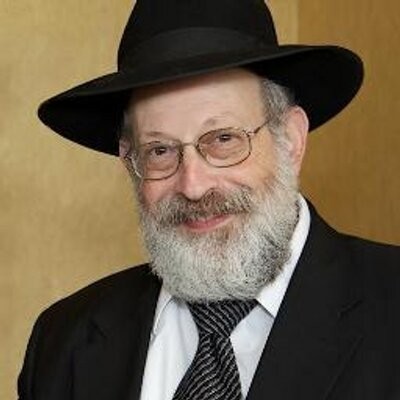 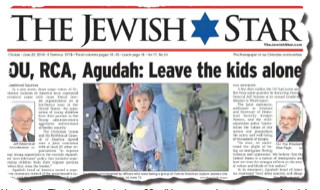 Here’s how The Jewish Star’s June 22 edition covered statements by Agudah, the OU and the RCA on the immigrant children.
Previous Next
By Rabbi Avi Shafran

Rabbi Avi Shafran, public information director of Agudath Israel of America, writes a weekly column for Hamodia, which declined to publish this submission. He posted it at RabbiAviShafran.com and it is reprinted here with permission.

The two-thirds of the American populace that objected to the policy of removing children from their illegal immigrant parents at the southern border emitted a collective sigh of relief last week. President Trump, in a stunning turnabout, signed an executive order intended to stop the practice.

Although there are logistical and legal issues still to be resolved, and subsequent presidential tweets to try to reconcile with the executive order, the president demonstrated the courage to publicly jettison his repeated claim that he was powerless to act, that only a larger action by Democrats in Congress could end the separation policy. He deserves credit for that move.

Before his reversal, though, the administration’s policy was to treat people who entered the country illegally as felons rather than civil violation offenders (first-time illegal entry is a misdemeanor). Children, even very young ones, were taken from their parents against their will, and the policy was broadly decried. Among the decriers was Agudath Israel of America, which expressed its “deep concern and disappointment” over the resultant “profound suffering and pain to both parents and children.”

The Agudah statement acknowledged that the “problem of illegal immigration is a serious one, and we support reasonable efforts by the administration and legislature to effectively stem the flow of would-be immigrants who have not been accepted through the legal immigration system.” But it contended that “seeking to enforce our statutes does not relieve us of [our] moral obligation” to prevent “the extreme anguish, fear and trauma born of separating undocumented immigrant family members, which is particularly harmful to children.”

The reaction to Agudath Israel’s statement was broad and diverse. There were many expressions of gratitude for its issuance, from both members of our community and others. But there were a number of negative reactions too. I serve as the Agudah’s liaison with the media and public, and so those reactions landed in my inbox, some with quite a thud.

They confirmed something that (as regular readers of this space well know) has pained me for years: the prevalence of gross, fervent and unthinking partisanship.

A legitimate question asked by several people was why the Agudah felt the need to comment on the situation at all. The organization does not, of course, regularly comment on events that lack direct impact on the Jewish community.

The knowledge, though, that wailing children were being taken from their parents was wrenching not only to a broad swath of the larger American public but to a wide swath, too, of Klal Yisrael — rachmanim, after all, bnei rachmanim. So it was not inappropriate for us to register our pain. And, with scores of religious groups registering their own protests of the policy, some of them quite harshly, it was felt that, should the Agudah say nothing, it would be assumed to approve of the policy.

Striking, though, was the lack of information that underlay some other (often vociferous) complaints. Several people, “informed” presumably by news sources that richly deserve the adjective “fake,” insisted that “the law” requires family breakups, and that the policy of considering unlawful entrants to be criminals had been in place under previous administrations. When I explained that there was and is no such law, and that the policy of automatically considering illegal entrants to our country deserving of incarceration and the seizing of their children was mere weeks old, they seemed taken aback.

Others apprised us that a “deep state” plot, or Democratic Party conspiracy, was clearly at play; others were upset that we dared “attack” a sitting president, although we took care in our statement to not even mention the president or attorney general, and lamented only the upshot of an unfortunate policy. When, in past years, the Agudah issued statements critical of the Obama administration for joining the U.N. Human Rights Council or fostering the Iran Deal, no complaints, to the best of my memory, were registered.

Some correspondents, seemingly having read only part of the statement, interpreted the Agudah’s expression of humanitarian concern as advocacy for “open borders.” As if there are only two options: wrenching kids from their parents’ arms, or having the country overrun by a horde of Aztec invaders.

The acutely politicized, black-and-white, “us-and-them” and often woefully misinformed mentality in parts of our world is lamentable. Intelligent, informed opinions on current events cannot be gleaned from talk radio hosts or blatantly partisan news organizations. Astuteness requires middos tovos, the consideration of different points of view and the application of that most important of skills: critical thinking.

And their lack poorly serves the mission of Klal Yisrael.