A lesson from Rav Schwab in the ultimate redemption 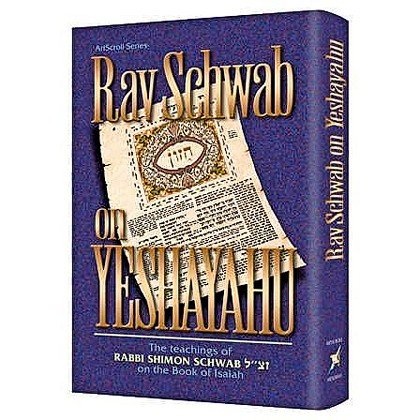 Beginning with Shabbos Chazon and until the Shabbos before Rosh Hashana every haftorah comes from the book of Yeshayahu.

This column considers a book published by Artscroll in 2009, “Rav Schwab on Yeshayahu,” the first detailed tradition-bound commentary on Isaiah that appeared in English. Edited by his son Moshe, it features the shiurim on Yeshayahu given by Rabbi Shimon Schwab zt’’l at his beloved shul, Kahal Adas Yeshurun.

Rav Schwab’s technique illuminates an ancient text and enhances its relevance to our people in this time of distress. Several examples demonstrate the genius of Rav Schwab’s method.

“When G-d comforts Zion, and brings about the geulah [salvation], it will not be a partial redemption, in which only a part of our problems will be solved,” explains Rav Schwab. “Rather, when the geulah comes, it will be final and complete, encompassing all of Israel’s ruins; it will be total redemption.”

“With the final geulah, the historic process of the world will have achieved its purpose: that mankind return to Gan Eden. … The geulah will signal the dawning of the era in which mankind, led by Israel, will have come full circle, and return to the status of Adam HaRishon while he was in Gan Eden. In this sense we can say that ‘for G-d has comforted  Zion’ means that when G-d comforts Zion at the time of the geulah, the lost Gan Eden will be restored, but this time Zion will be the Gan Eden.

“After its sins are atoned for, and Israel finally finds its nechamah, the lost Gan Eden will be back on earth — and it will be in Zion.”

This optimistic redemptive tone leads to the verse’s conclusion, “Rejoicing and happiness will be found there.”

Rav Schwab concludes with a drash: “At the final geulah, sasson, outward rejoicing and simcha, a sense of inner happiness, will become permanent.”

This eschatological sentiment expressed by Rav Schwab is both timely and prophetic.

A version of the column was published in 2010.