Baking matzah, from the “Birds’ Head Haggadah.” Imagine the figure at left exclaiming, “Shmurah Matzah $50 a pound? No way!” 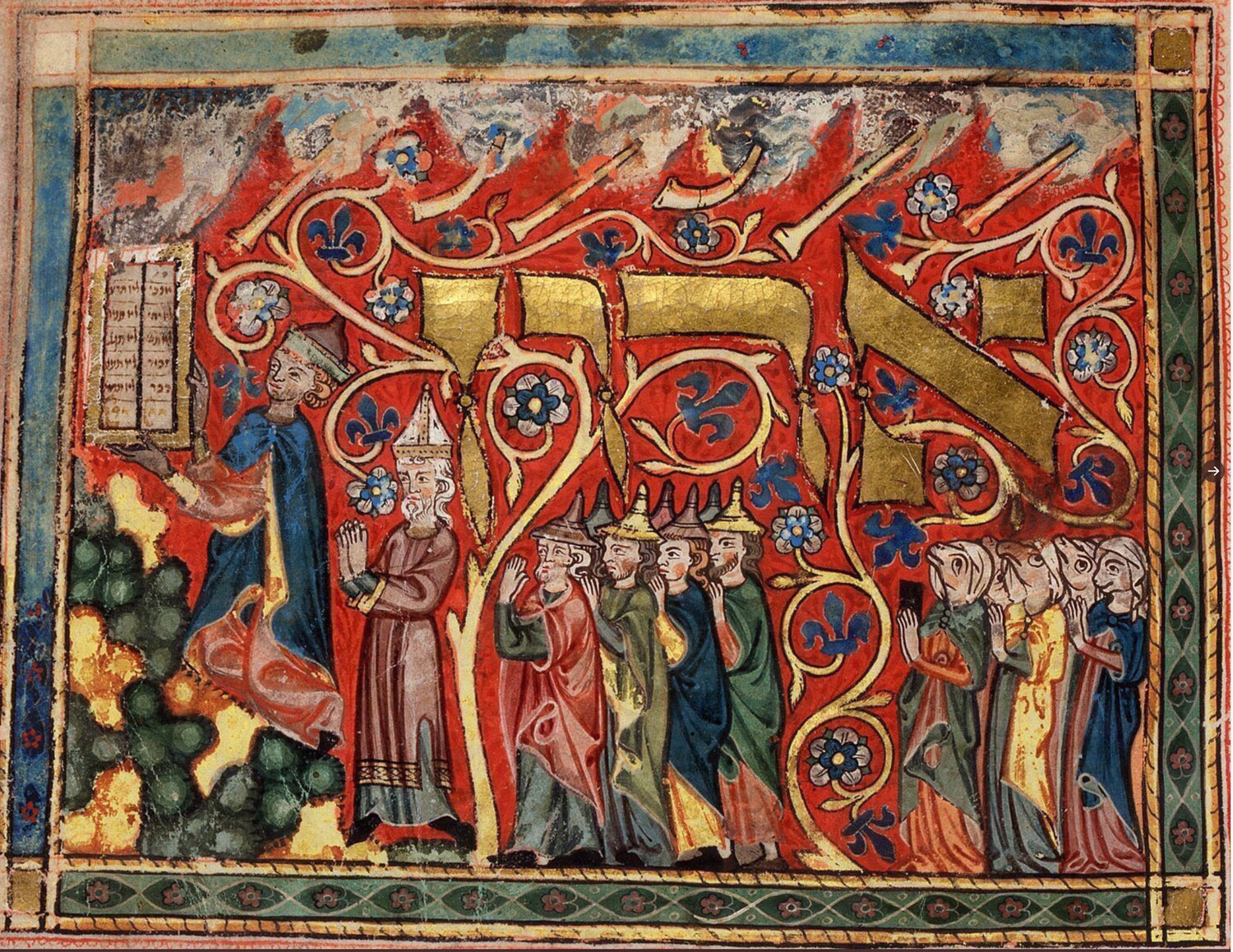 Image from the Tripartite Mahzor (Britism Museum).
Previous Next
By Henry Abramson

They stand with hands clasped, eyes raised heavenward in silent devotion. The leader appears to hold a small siddur, perhaps guiding her sisters in prayer as their husbands (recognized as Jews because each wears the mandatory “Jew’s Hat,” a regulation emerging from the early 13th-century Church) stand behind a disproportionately large figure of Aaron crowned with a white mitre as they watch Moses receive the Ten Commandments at Sinai.

The women, graceful in their demure poses and flowing robes, are strangely represented in a zoomorphic fashion: human bodies with animal heads. What is the meaning of this strange transfiguration?

This is not the only representation of zoocephalic (animal-headed) Jews in the history of illuminated medieval manuscripts. Perhaps the best known is the mysterious “Birds’ Head Haggadah,” also a product of early 14th century southern Germany, in which many (but not all) of the figures are represented with the heads of sharp-beaked birds (perhaps, as per the suggestion of Professor Marc Epstein, as griffins).

But the Tripartite Mahzor (so called because it was divided into three parts and preserved in Budapest, London, and Oxford) is unusual in that it is specifically women, not men, who are portrayed with animal heads.

Scholars have advanced several theories for this unusual, and relatively brief-lived, phenomenon. Noting that the figures are certainly not unsympathetic in presentation, Zofia Ameisenowa suggested the possible influence of a Christian tradition of depicting righteous individuals in this manner, a theory that is reinforced by the occasional use of non-Jewish artists to illustrate manuscripts.

Others, like Ruth Melnikoff and Heinrich Strauss, have argued that the images are indeed antisemitic (in this case, misogynistic as well), although that theory is hard to square with the fact that these images decorate very expensive Jewish books, treasured by their wealthy owners.

The most persuasive argument, however, was advanced in a recent book chapter by a Hungarian scholar, Zsofia Buda, who pointed to the dual influences of a 12th century responsum by Rabbi Ephraim ben Isaac of Regensberg (cited by the Maharam, 610) and a pietistic movement that briefly swept the region known as the Hasidei Ashkenaz.

Dr. Buda writes that Rabbi Ephraim ben Isaac, in contrast to many medieval rabbis who forbad the artistic representation of the full human form, permitted such art so long as the faces were intentionally distorted, for example with animal heads. This approach seems to have affected the few Jewish manuscripts that emerged from southern Germany in the early 14th century, then deeply affected by the teachings of the Hasidei Ashkenaz as preserved in a book still widely studied today, the Sefer Hasidim. Despite the name, the medieval German Hasidim had little in common with the 18th-century movement led by the Ba’al Shem Tov: the Hasidei Ashkenaz were noted for their rather harsh ascetic practices.

Why only the women?

Dr. Buda opines that the female zoocephalism of the Tripartite Mahzor was an effort by the artist to conform to rabbinic prohibitions against ogling at women.

Rather than risking the possibility that viewers of the richly illustrated pages might gaze inappropriately at the Jewish women on the page — yet not wishing to demean them by diminishing their beauty — the artist chose an unusual compromise, portraying them as angelic mammals and birds. Strange but probably true.

All of which might provide some interesting discussion around the Shabbos table this week, particularly given the practice of removing female representations from publications, not unknown even today.

Henry Abramson, a resident of the Five Towns, serves as a Dean of Touro College in Brooklyn.