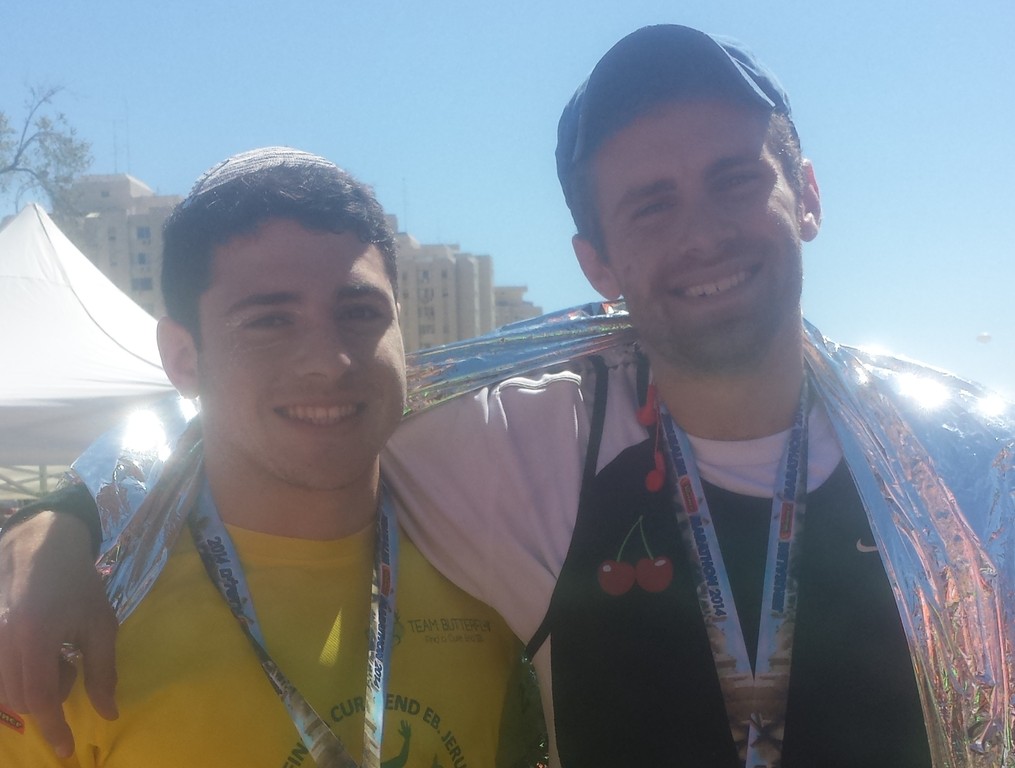 Chaim Shulman of Woodmere (l) and his madrich at Yeshivat Hakotel, Chanan Kupietsky, after completing the Jerusalem Marathon.
By Malka Eisenberg

The Jerusalem Marathon. It’s one of the world’s toughest, but you can’t beat the view. Or the inspiration.

Chaim Shulman, 18, a Woodmere graduate of Mesivta Ateres Yaakov, completed his first marathon on Friday as a member of Team Butterfly, an organization promoting awareness of Epidermolysis Bullosa (EB), raising $600 for the group. He is currently a student at Yeshivat Hakotel in Jerusalem.

“I started training in November. I went running after night seder (study period) with my chevruta (learning partner), doing ten miles, half marathon stuff. I ran with my shanah bet (second year) chevruta — he wanted to get in shape for the army and I wanted to get in shape for the full marathon. I ran with my rosh madrich (head counselor) [who is] ex special forces in the army in Sayeret Duvdevan.”

Epidermolysis Bullosa, a group of skin conditions that are either inherited or caused by a mutation, is characterized by painful and disfiguring blistering all over the body. Those with the disease lack a protein that binds the layers of skin together. People who are born with EB have a 60 percent risk of death by age 15.

Team Butterfly was founded by David Beiss of West Hempstead who has EB. Beiss learned at Yeshiva Torat Shraga in Jerusalem last year and is currently a student at Yeshiva University.

The hilly route is planned to pass through some of the major sites of Jerusalem — the Knesset, Hebrew University, the Old City, Armon Hanatziv, Ammunition Hill, the Israel Museum, the city center, and ends at Sacher Park.

“It’s a nice run,” Shulman said. “Great scenery. You can really see the pasuk (sentence from Psalm 125), ‘Yerushalyim harim saviv lah’ (the mountains surround Jerusalem),” he said. “The top of Har Hatzofim (Mount Scopus) has an incredible view. You understand why they call it that. You see the whole Yerushalayim. You see the Tanach (Torah) come to life, you feel it.”