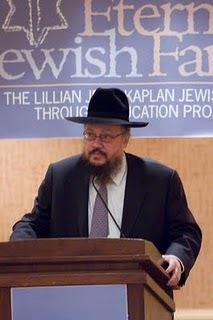 With the public revelation of Orthodox conversion guru Rabbi Leib Tropper as a caught-on-tape predator, the Orthodox Jewish community is grappling with a sexual scandal of Madoffian proportion.

On Monday, the Rabbinical Council of America issued a statement about what the bloggers who broke the story have begun calling “Tropper-gate”:

“We are deeply appalled, saddened and pained by reports that have reached us concerning alleged inappropriate behavior on the part of the chairman of the rabbinic committee of the Eternal Jewish Family, Rabbi Leib Tropper,” said the RCA. “What we have heard, if true, violates the fundamental elements of all that Judaism holds sacred.”

Conversions facilitated by Tropper remain valid, said the RCA statement, echoing a p’sak [halachic ruling] by HaRav Reuven Feinstein, chair of Eternal Jewish Family’s Halachic Committee. In his own statement, Rav Feinstein did not discuss the accusations against Tropper but said, “The resignation of Rabbi Tropper in no way casts any cloud over the validity of any conversion performed by a Bais Din affiliated with or supported by EJF.”

Speaking to a reporter by telephone on Tuesday afternoon, Rabbi Barry Freundel, chairman of the Geirus Policy and Standards Committee of the RCA, pronounced himself “appalled” by the allegations.

“It’s basically someone in a position of power taking advantage of someone in a much weaker position; that has happened in many walks of life.”

The Rabbinical Council has internal mechanisms designed to prevent similar abuses, he said. “I can’t swear nothing like this can happen but I can tell you, the way we set it up, you have a sponsoring rabbi and the court that works with them, the committee, the Beis Din of America; you have a whole series of individuals. It doesn’t flow through one person and it’s not one person in control.”

Tropper’s fall from grace was meteoric, occurring over the span of a few days. The founder of the Monsey-based Eternal Jewish Family organization announced his resignation on December 12. It had taken effect two days prior. Shortly after Shmarya Rosenberg, the blogger behind Failed Messiah, began posting links to unauthenticated recordings between Tropper and Sharon Orand, a Florida woman in the process of  conversion to Judaism. The tapes explicitly detail an intimate relationship between the two, as well as intimate activities that apparently also included Tropper’s wife. This past Thursday, the New York Post printed the story with the headline, "Tal-mood for love... Rabbi tries to share hottie."

Tropper has been at the center of previous controversies, though none of this magnitude or so destructive to himself, personally. As an individual he was responsible for pushing for a rabbinic ban on the work of Rabbi Natan Slifkin, known as the “Zoo Rabbi,” who has written books that cite halachic sources for evolution. Rabbi Slifkin declined to comment for this article. As head of Eternal Jewish Family, Tropper sought to create a unified conversion standard in the United States and Israel. He cast doubt on conversions performed by a number of prominent American Orthodox rabbis and solidified his own position as the go-to person for Orthodox conversions. In 2006, rejecting long-standing Halachic practice, Tropper retroactively voided a woman’s conversion because she was seen wearing pants in public.

Tropper recently had a very public break with one of the backers of EJF, industrial billionaire Guma Aguiar, who accused Tropper of misappropriating funds intended for the organization. He currently is suing Tropper for millions.  Tropper has denied the accusations and claimed that Aguiar assaulted him.

A former business associate of Tropper shared a recollection with a reporter that could shed light on how Tropper managed to accumulate so much power in the world of Orthodox conversions: payoffs, he claims.

“They do pay off rabbonim large sums of money. Like in the hundreds of thousands of dollars. These rabbonim, for what it’s worth, this should be looked into in general. They accept a stipend for their haskamah [approbation]; I have a big name give me money and I’ll endorse you. It doesn’t sound right and not what a rav should be doing.”

All mention of Tropper has been scrubbed from the EJF website. It was initially announced that HaRav Elya Ber Wachtfogel, Rosh Yeshiva of the Yeshiva of South Fallsburg, would assume Tropper’s responsibilities at EJF, but he denied that and several days later it was announced that Rabbi Chaim Blum would be the interim director of the organization.

An anti-lashon hora group run by Tropper in midtown Manhattan was profiled in the New York Times in 1999.

“In the beginning of the Torah, Adam blames Eve, and Eve blames the serpent,” Tropper was reported to have said, “and it has never stopped since then.”

Editorial: Keep an eye on the zealots

Opinion: Will Weberman case be a catalyst for change ?