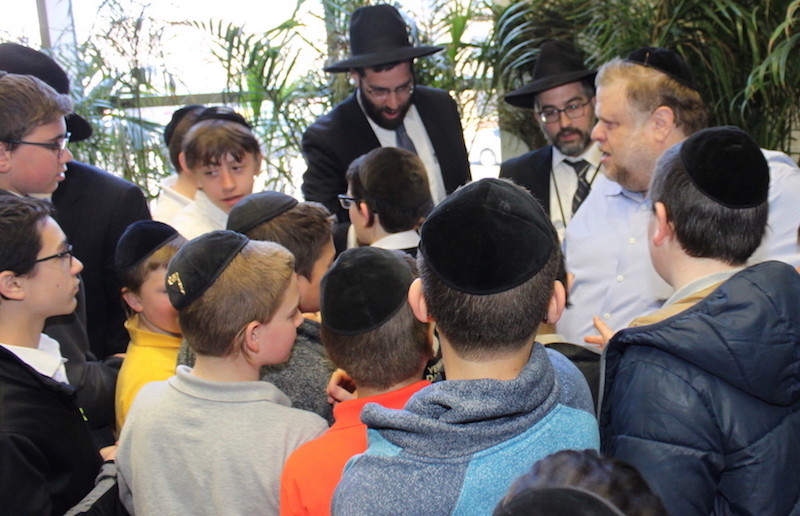 Yanky Brach is greeted by students after the surprise presentation at Yeshiva Darchei Torah. From right: Brach; Rabbi Dovid Frischman, menahel of YDT’s middle school; and Rabbi Avrohom Bender, a rebbi and menahel at YDT. 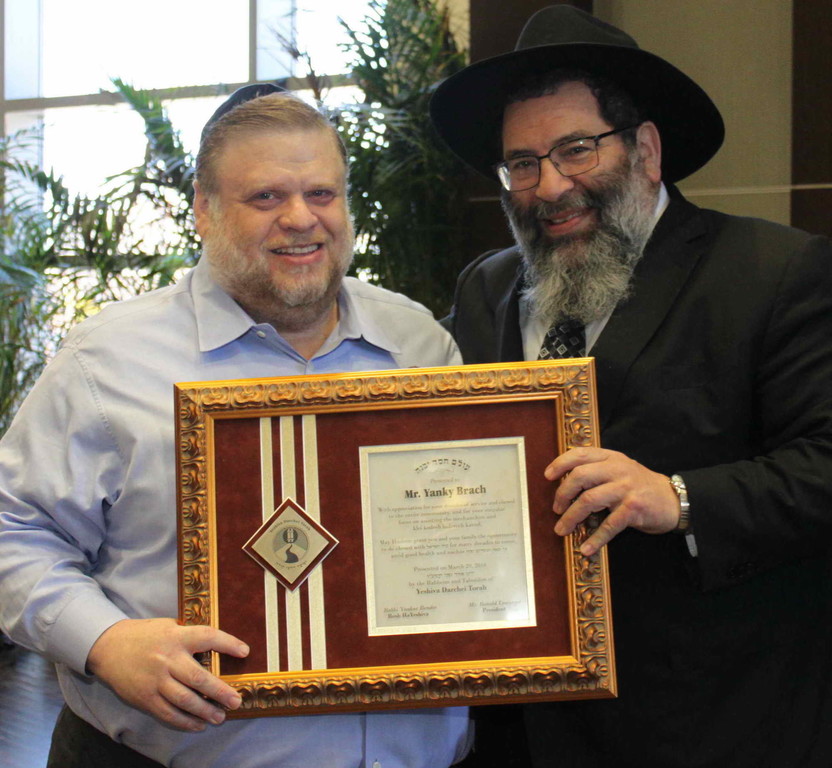 Previous Next
By Benzion Kaplan

In the Diamond Bais Medrash at Yeshiva Darchei Torah in Far Rockaway, a crowd ranging from sixth graders to kollel yungeleit and rabbeim waited patiently for the arrival of Yanky Brach, to present the proprietor of Brach’s Supermarket with an unexpected honor.

Brach has used his business, which is now being sold, to quietly accrue profits that transcended the financial. With special pricing for yeshivos and across-the-board discounts for rabbeim and kollel yungeleit, he had made his own investment in the spiritual growth of the Far Rockaway and Five Towns community.

Brach was escorted into the assembly by Rosh HaYeshiva Rabbi Yaakov Bender. Rabbi Dovid Bender, Rosh Kollel of Darchei’s Kollel Tirtza Devorah, said that through his actions, Brach was demonstrating his firm adherence to a fundamental of Yiddishkeit: that Torah is our lifeblood, so talmidei chachamim should be accorded respect.

A clearly moved Brach accepted a plaque and addressed the crowd. He recalled the legacy of his father and role model, Shmuel (Sam) Brach, a”h, then remarked that although Yeshiva Darchei Torah has grown tremendously since he enrolled his first son over 20 years ago — from a small set of structures and a few hundred talmidim to today’s magnificent campus that serves over 2,000 students — the essential ingredient in the yeshiva’s chinuch approach had not diminished.

“You cannot take the heart out of Darchei,” he declared with visible emotion.

The yeshiva publicly expressed its gratitude to the Brachs, a family that is a role model of chesed, while hundreds of talmidim absorbed living lessons in the importance of hakoras hatov — and appreciating Torah — that they will not soon forget.