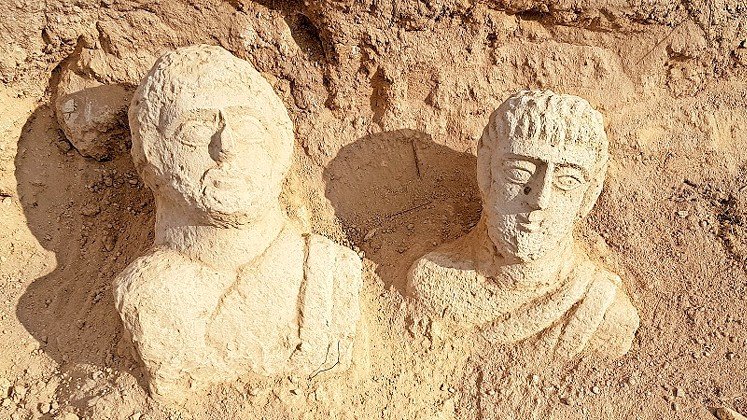 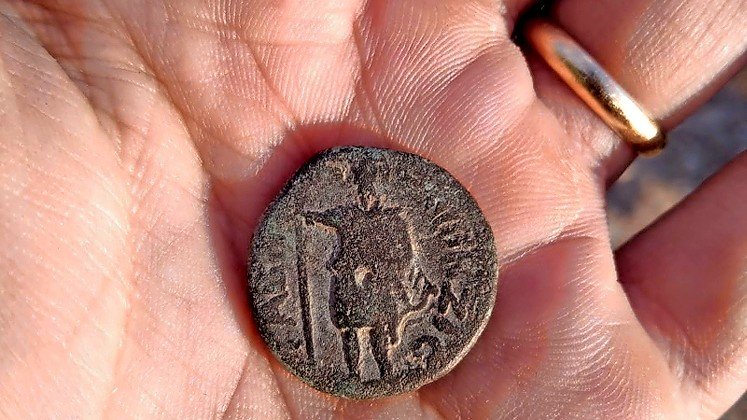 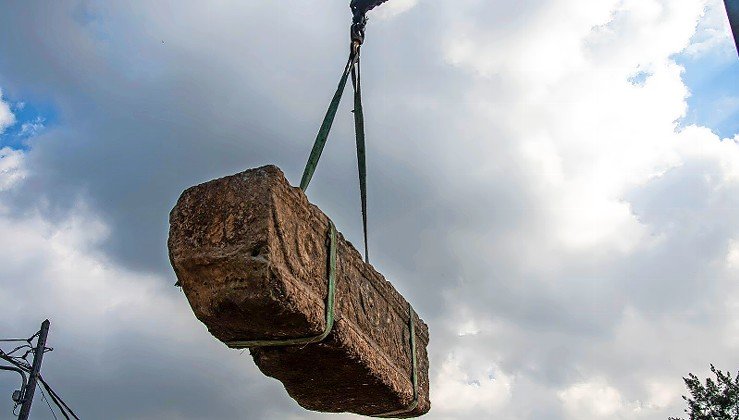 An ancient sarcophagi, unearthed at the Ramat Gan Safari Park, hangs high off the ground. 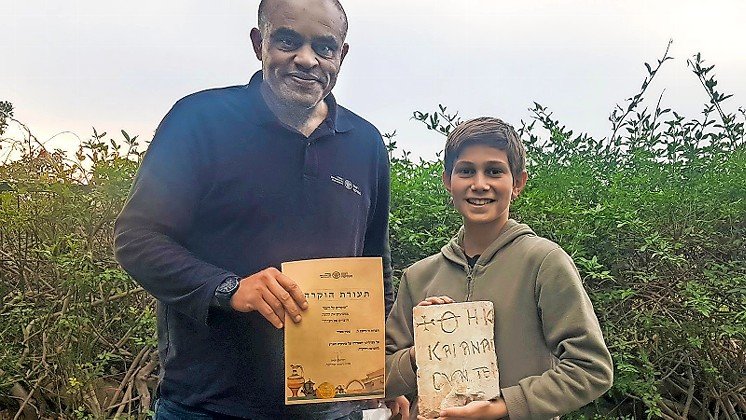 IAA archaeologist Karem Said hands Stav Meir a certificate of appreciation for alerting the authorities to a historical find. 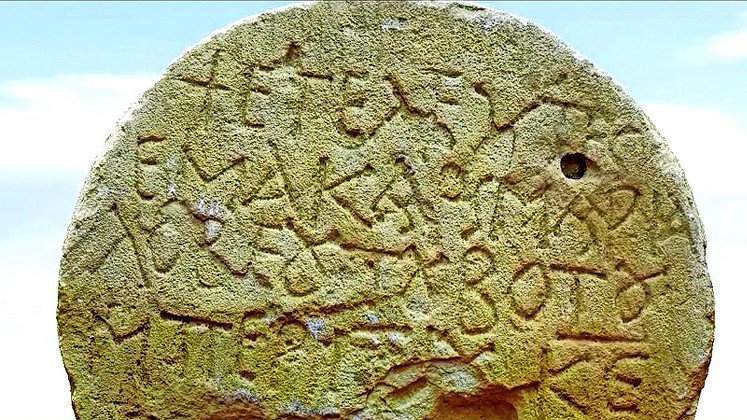 Ancient tombstone referring to a blessed Maria, unearthed in Nitzana in southern Israel. 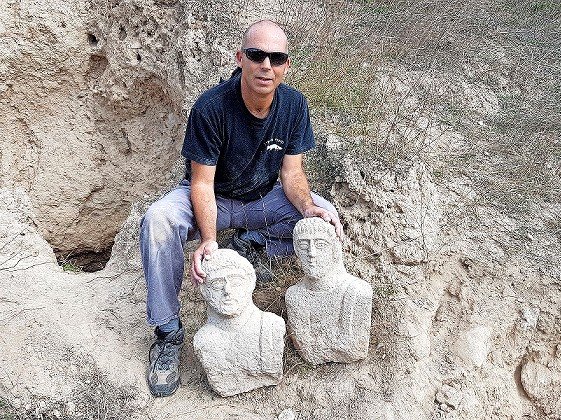 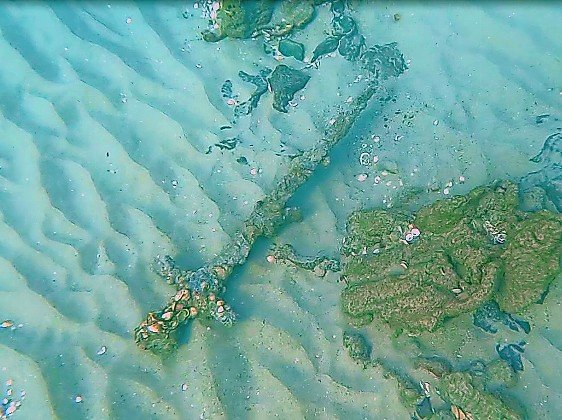 Crusader sword on the seabed. 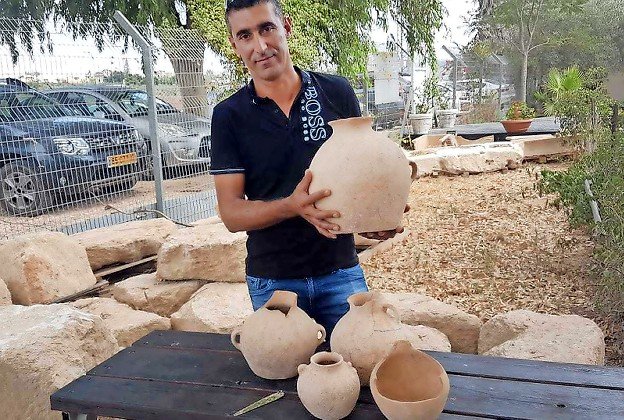 Electrician Ahmed Nassar Yassin with the ancient treasures he found. 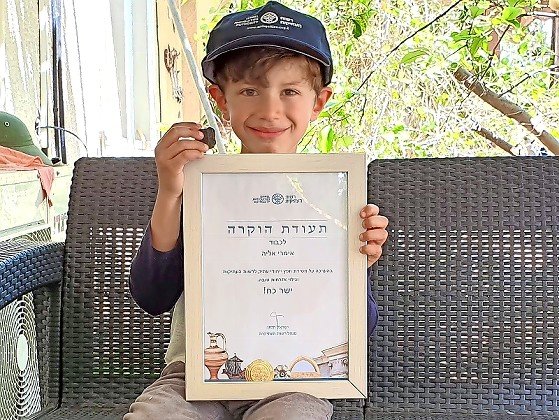 Imri Elya with an ancient tablet and a certificate of recognition from the Israel Antiquities Authority. 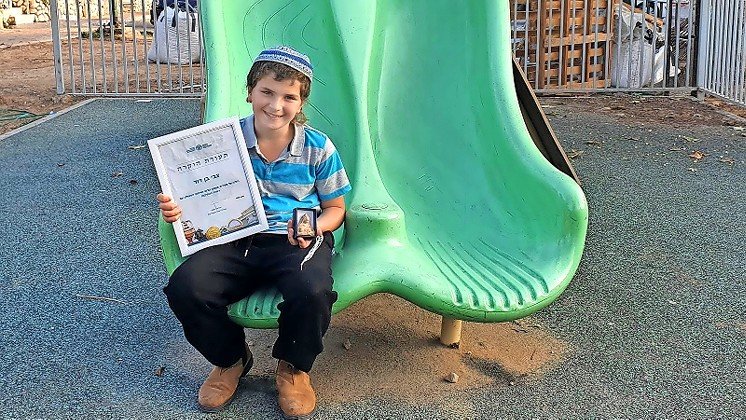 11-year-old Zvi Ben-David holds his certificate of appreciation for good citizenship for turning in an ancient figurine find. 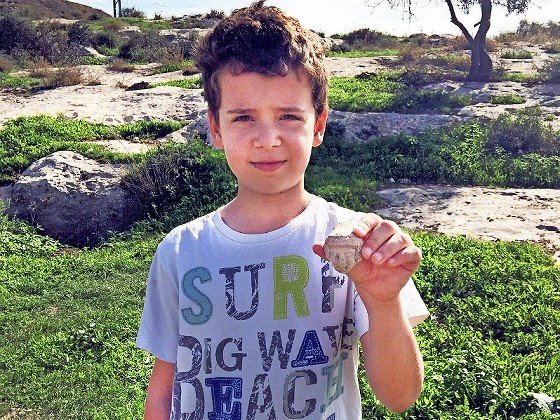 It’s no secret that Israel is brimming with amazing archeological finds, ranging from huge palaces to marble toilets.

While some of the discoveries are the result of backbreaking archeological digs, many others were simply stumbled upon by people going about their business.

And we’re not just talking about the odd coin or two — like the 11-year-old girl who unearthed a 2,000-year-old silver coin this week — but about mind-blowing and history-changing artifacts such as the Dead Sea scrolls, first unearthed by Bedouin shepherds in the 1940s.

Since then, countless people have unexpectedly come across ancient treasures, enriching our understanding of the past and the people who inhabited it.

To celebrate the fabulousness of all these accidental discoveries, here are 10 of the best ones in recent years.

Just recently, an Israeli man scuba diving off the coast in northern Israel spotted several ancient artifacts lying on the seabed that were probably uncovered by shifting sands. Among them were pottery shards, stone anchors, and, most excitingly, a meter-long sword dating back to the Crusader era. The sword was preserved in perfect condition, albeit covered in a crust of seashells and sediment, and once it is cleaned up and researched it will be made available for public viewing.

Eleven-year-old Zvi Ben-David was out hiking with his family in southern Israel earlier this year when he came across a small pottery figurine believed to be an ancient amulet that was meant to protect children or increase fertility. The amulet is in the shape of a woman wearing a scarf but is otherwise bare-chested, and was probably in use in the fifth or sixth centuries BCE. The discovery is pretty rare, and the Israel Antiquities Authority has only one such other figurine, but these were apparently common back in the day and believed to bring good luck and ensure protection.

With a headline so good it can’t be anything but true, it turns out that earlier this year two Roman-era coffins were uncovered for a second time after being forgotten at the Ramat Gan Safari. Originally found in the zoo’s parking lot many years ago, they were moved near the African savannah zone where they were forgotten and disappeared beneath sand and thick vegetation.

Now, in the midst of construction for a new wildlife hospital, the head of the African savannah zone noticed the two coffins jutting out of the ground and reported them. The 1,800-year-old sarcophagi were finally transferred to the Israeli National Treasures repository, where they are being better looked after.

A rare coin dating back to the Roman Empire was discovered earlier this year by a soldier in the middle of an IDF training exercise, no doubt lending a magical touch to an otherwise dusty event. The coin bears an image of Roman Emperor Antoninus Pius and was minted in 158-159 CE. Its reverse side depicts the Syrian moon god, Men, along with the inscription “of the people of Geva Philippi” and the date it was minted.

The identification of the place of minting is what makes the coin so rare, with only 11 other such examples known. According to the Israeli Antiquities Authority, the original owner of the coin probably lost it while traveling one of the roads in the area. The coin waited some 2,000 years to be picked up again.

A tombstone dating back some 1,400 years was recently unearthed in southern Israel by an Israel Nature and Parks Authority worker out clearing nature paths, revealing interesting details about the life of its occupant. According to the inscriptions on the tombstone, it belonged to a lady called Maria who apparently led such an immaculate life that her loved ones thought it a fact worth mentioning on her grave. The somewhat surprising inscription was chiseled into the stone in Greek, alongside the date of Maria’s death – February 9 of an unspecified year.

Last year, when six-year-old Imri Elya was visiting an archeological site with his parents, he noticed a tiny tablet on the ground and picked it up. There were two figures engraved on it – a man leading a naked captive with hands folded and tied behind his back. The tablet shows the free man with curly hair and a full face, while his captive is thin and his face is elongated. Archeologists believe the tablet was made in the Late Bronze Age, between the 12th and 15th centuries BCE, at a time when the Egyptian Empire ruled the area, and as such sheds light on difficult aspects of life back then.

Last winter, 13-year-old Stav Meir went foraging for mushrooms following some rain and ended up stumbling on an archeological artifact brought to the surface by the downpour: a stone slab with some Greek inscriptions, which was identified as a Byzantine-era burial inscription that likely belonged to a wealthy individual from the Caesarea area, where modern-day Meir also resides.

Electrician Ahmed Nassar Yassin from the Lower Galilee was walking down a dirt road on his way to a customer’s home when he leaned against a mountain ridge. The rock crumbled, exposing ancient-looking storage jars, pouring vessels and a copper dagger blade. Yassin collected the find and reported it to the authorities, who identified the stash as artifacts from the Intermediate Bronze Age some 4,500 years ago. The artifacts seem to have been placed in a burial cave to accompany their inhabitants on their journey to the afterlife, according to the customs of the time.

A few years ago, a woman spotted something sticking out of the ground while taking a walk with her husband near the northern city of Beit She’an. The couple called the Israel Antiquities Authority, whose representatives they joined in unearthing two limestone busts dating back to the Late Roman period in the third and fourth centuries CE. According to the specialists, these types of busts were usually placed in or near burial caves and may be representations of the deceased. The two discovered busts were created in the Oriental style, representing a shift from a Classical style to a more local one.

A young boy made an Indiana Jones-worthy discovery a few years ago when he came across an ancient fertility goddess figurine while walking in nature with his family. Itai Halperin, who was eight at the time, stumbled upon the ceramic statuette from the Iron Age, around the 10th to sixth centuries BCE. To thank him for his good citizenship, the Israel Antiquities Authority enabled his class to participate in a real dig and tour its archive, no doubt making him the coolest kid in the classroom.